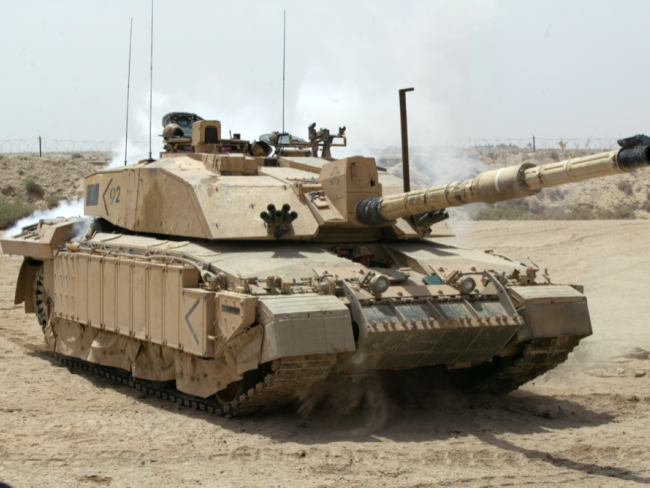 Challenger 2 battle tank on patrol outside Basra. Britain is to send Challengers to Poland to replace tanks that country is sending to Ukraine. Photo MOD (Open Government Licence).

Arms continue to pour into Ukraine and bordering countries, and Britain is one of the biggest suppliers. The government is evasive when challenged for details, but in February and March thousands of anti-tank weapons were supplied to Ukraine, followed by 6,000 missiles in March.

On 8 April military aid of £100 million was announced, on 23 April a further unspecified amount, and on 1 May a further £300 million. Details are not released, but they include armoured vehicles and long-range artillery.

Some 8,000 British troops, about 10 per cent of the regular army, are about to take part in Operation Hedgehog, the largest deployment since the cold war. As well as manoeuvres in Estonia and Latvia, subsidiary operations are taking part in Poland (Exercise Defender) and North Macedonia (Exercise Swift Response.) Headquarters have been established in Latvia and Lithuania.

In a speech to the Lord Mayor’s Easter Banquet at Mansion House on 27 April, Foreign Secretary Liz Truss told her audience of finance capitalists to expect a long war. She spoke of extending the war to Moldova and Georgia, risking a second Crimean war nearly 170 years after the last, and supplying further heavy weapons, tanks and aeroplanes.

Truss spoke too of a “global NATO”. She has previously encouraged mercenaries to travel to Ukraine to join Ukrainian forces.

Truss and others are jockeying for position for a putative Conservative leadership contest when Johnson goes, but while her rivals may disagree on detail, they all support escalation in one form or another. Meanwhile the Labour Party strives to outdo the Conservatives in its absolute commitment to NATO.

The ostensible cause for the Crimean War of 1853 to 1856 was the guardianship of the holy places in Jerusalem. In reality, as Karl Marx pointed out at the time, it was competition between the belligerents for control of the Bosphorus and Black Sea trading routes.

As Germany rearms, as Finland and Sweden apply for NATO membership, the demand to get Britain out of NATO becomes ever more urgent. There is too much to do here to allow foreign adventures to drag Britain into a conflict.

Britain out of NATO!
Britain must keep out of Ukraine
Stay out of Ukraine!
Ukraine garners US support as it talks about invading Crimea
The psychological toll of Ukraine's war