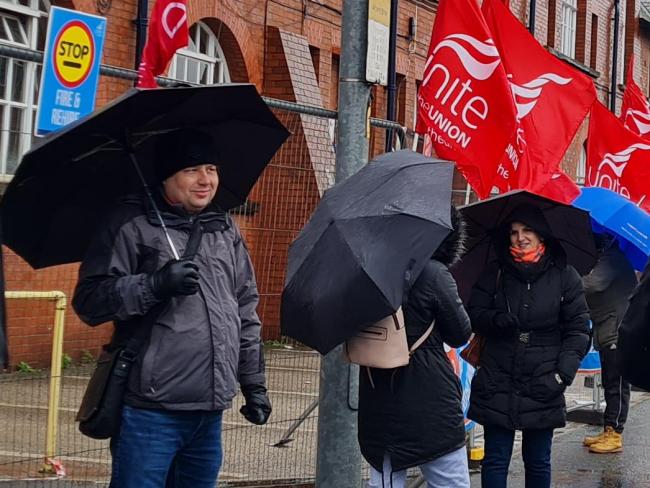 Bus drivers employed by Go North West have been on indefinite strike in Manchester since 28 February in response to the company’s attempts to force them to agree to new contracts of employment which would mean longer hours and less pay. And the strike has been solid.

The company is seeking to tear up current sick pay arrangements – in the middle of the pandemic.

Manchester TUC organised a well attended on line rally in support on 13 March, while rail workers in RMT have visited the picket line at the Queens Road depot and organised a collection for the strikers.

Go North West is trying to undermine the strike by outsourcing services to unorganised small bus and coach operators with old vehicles that do not meet accessibility standards. There have been reports of the unsuitable vehicles being driven unsafely, and carrying too many passengers to be Covid safe.

Meanwhile, three separate disputes over pay and conditions with London bus operator RATP have resulted in strikes across the capital.

With schools in England back last week and with the economy slowly beginning to open up following the lockdown, the strikes will cause increasing disruption for London’s commuters.

Negotiations with Unite broke down when it became clear that RATP was not prepared to change its position.

Unite regional officer Michelle Braveboy said: “RATP is using the Covid pandemic as cover for attacking drivers’ pay and conditions. It is expecting drivers to do the same work for lower pay.”

Further strikes in all three RATP subsidiaries are scheduled for successive Wednesdays on 17, 24 and 31 March.