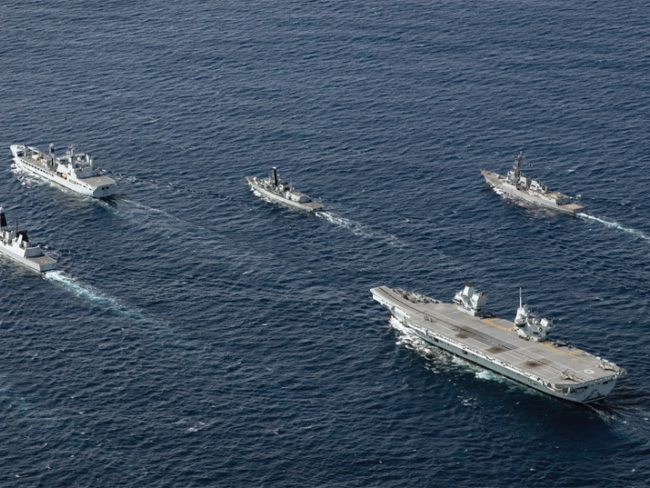 HMS Queen Elizabeth in formation with a Carrier Strike Group during an exercise in 2019. The attack carrier is set to sail for the South China Sea in May.
www.defenceimagery.mod.uk
(OGL 1.0)

What should Britain’s relations be with other nations? There’s a straightforward working-class response to that: mutual non-interference in each other’s internal affairs; mutual respect for each other’s territorial integrity and sovereignty; mutual non-aggression; equality and cooperation for mutual benefit; peaceful coexistence.

It sounds obvious, but as the war drums are beating again over Crimea, that sort of attitude is a world away from the policies pursued by the government.

Boris Johnson sums it all up with the phrase “Global Britain”. He actually means a globalised Britain, one in which our foreign (and domestic) policy is driven by Wall Street and the City of London. Western finance capital and its agents treat Russia and China as adversaries, not because they are socialist countries (they are not) but because they are outside of their control.

To understand what “Global Britain” actually means, imagine the furore if Vladimir Putin were advocating “Global Russia”. Looked at that way, you can see why Global Britain is intended as a threat to any country seeking independence and sovereignty, any nation not wanting to be ruled by the multinationals.

It’s not as if any of these supposed enemies is threatening to invade Britain or inflict harm on the population. We don’t want wars. We want a government that will defend our national territorial sovereignty and maritime rights and interests, maintain the unity of the country, defend important coastal areas, deter any aggression against us – and above all safeguard our independent development.

As it is, we have a government that won’t even promise to build Royal Navy ships in Britain. The latest defence policy, published in March, leaves a loophole a nautical mile wide: “We will sustainably grow the capacity and capability of the U.K. shipbuilding enterprise, potentially drawing on the expertise of international partners where appropriate,” it says.

Instead of peace, we have the promise of conflict. Johnson’s foreign policy review pledges, “The UK will deploy more of our armed forces overseas more often and for longer periods of time…constant campaigning, moving seamlessly from operating to war fighting…permanent and persistent global engagement…a more proactive, forward deployed, persistent presence.”

We face not even a new “Cold War”, but a series of actual wars against countries seeking to uphold their independence and sovereignty. And the continuation of wars of attrition designed to chew off the border regions of “adversary” states, like attempts to nudge Ukraine into the arms of the EU and NATO, or stirring up strife in China’s border area with India, Xinjiang, Taiwan, Tibet, and Hong Kong.

Non-intervention should be our watchword. It does not mean we back the government in power. Just as to oppose Tony Blair’s attack on Iraq was not to be “for” Saddam Hussein, to expose NATO aggressions against China and Russia is not to be “for” China or Russia. You don’t need to support anybody in order to condemn aggressive war.