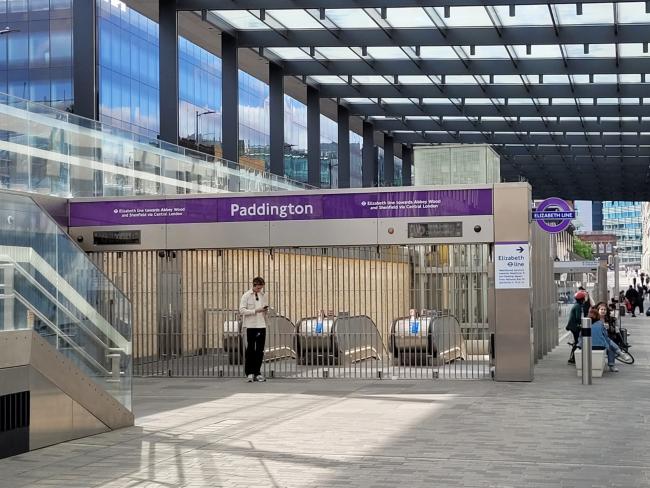 Not long to wait for the Elizabeth Line. Photo Workers.

Tuesday 24 May sees the public opening of the Elizabeth Line. We congratulate the British working class for their efforts of building Crossrail, one of the largest railway infrastructure projects in Europe.

Crossrail construction began 13 years ago, in May 2009. Since then over 15,000 working men and women have put in over 120 million hours of work to complete the new line.

Over three years from 2012 eight tunnelling machines were used to bore 26 miles (42 km) of new rail tunnels. Over 6 metres in diameter and up to 40 metres deep under the heart of the capital, they are an enormous engineering achievement.

“Tunnel gangs” of 20 people, working tirelessly in different day and night shifts, operated the tunnelling machines. The work was completed in May 2015 by the tunnel boring machine, named Victoria, completing her work at Farringdon station.

Crossrail started testing the new railway in 2018 to verify the design and installation of the railway systems to match the requirements of the new Elizabeth line. Trial runs began the same year to make sure that the railway systems, design, safety and reliability met the necessities for the new line before services began.

With such a large project there were wider impacts and benefits too. Crossrail excavated over eight million tonnes of earth in the tunnelling operations. This has been used to create a wetland habitat for birds in Essex, and helped the environment too.

To reflect the environment and heritage of the local area, different architects created designs for every new station with its own distinct character.

During construction 100 archaeologists worked on 40 sites; one of the largest archaeological programmes in Britain. They found many items spanning 55 million years of London’s history and pre-history.

In 2017, the Museum of London Docklands showcased 500 of these archaeological discoveries in the “Tunnel: the archaeology of Crossrail” exhibition. This received 96,750 visitors with 7,324 event participants. A Roman cremation urn was one such discovery, found at Liverpool St, and still currently on show at the Museum.

Crossrail was originally due to be completed by August 2018 but with many issues it has been massively delayed and well over budget. Why is this the case?

‘Why was Crossrail delayed and over budget?’

Mark Wild, Crossrail chief executive since 2018, admitted that the project needed a “coalition of people” to “own the project”. He reported that the Crossrail board thought the final synchronisation could be done within a matter of weeks – spectacularly not the case as it turned out.

One of the main errors of Crossrail was, as Wild explains, “to create a patchwork quilt of procurement with 37 individual contracts”. From his point of view, leaders of future massive constructions “will have to realise that they can’t just work through contractual interfaces.” His view is that, “It has to be about human beings coming together to achieve something that’s bigger than their individual contracts.”

We have to wait until May next year for the complete Elizabeth Line service to run, but despite the delays and changes in travel after the coronavirus pandemic Wild says this is a project of massive long term value, “What’s permanent is the fact that we’ve created so many journey opportunities for people and so much time saving. Ultimately, I think that will stand the test of time.”

The workers involved deserve credit for their genius, creativity and hard work while fulfilling the needs of the people, helping the environment and discovering London’s forgotten past. More than that, the whole British working class deserves recognition for this project – epitomising the values we treasure.

Construction was delayed and over budget because of the competitive market and use of many different contractors as well as short-sightedness by the board who underestimated the complexity of the project completion. And many contractors will have made good profits while just looking at their own interests, including some who were determined to keep trade unions out.

Despite the delays and the pandemic, the working class has persevered and produced easier travel that will last us a long time. And Crossrail is not the end, Britain needs more transport infrastructure improvements, not least HS2, which last year the government decided to scale back.

Would it not be better if we, the British people, through a democratically decided planned economy, worked co-operatively to fulfil such bigger aims and aspirations for the benefit of all? That way we can create opportunities without unnecessary hindrance from the market, thus saving much time and money.

The line opened successfully on Tuesday 24 May. According to to Transport for London 130,000 journeys had already been made by noon.

Trade unions welcomed the achievement. Aslef, which represents drivers said, “We believe in investing in the infrastructure of this country – in the north as well as the south of England, in the Midlands, in Wales and the west, and in Scotland – because we know that a good public transport system is vital to the economy of this country”.

TSSA too praised the engineering achievement and emphasised the importance of infrastructure investment, while criticising the complex fare structure outside TfL zones.