Facing up to Britain’s logistics challenge 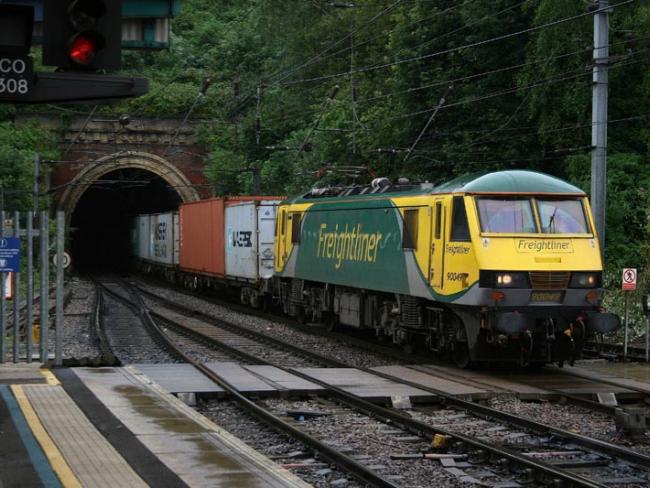 The overwhelming reliance on road transport to keep the country functioning is a growing problem – for health, for the environment, and not least for passenger transport…

Britain’s people, its industry and economy are all self-evidently dependent on the transport of food, clothes, medicines and pharmaceuticals, other manufactured goods of all kinds, fuel, construction materials, raw materials, and waste materials. This transport of what is variously termed goods, freight or cargo along with its effective storage and distribution is these days often referred to as the logistics sector.

Around 1,620,000 people are employed in this sector in Britain, and a further 2,350,000 employed in related work such as maintenance and warehousing. This is about 7.6 per cent of the country’s workforce.

Most of the nation’s goods are moved on the same roads, railways and ferries that are used by people to get around, whether it is to or from work, on work related travel, or for leisure. The transport system for freight often sits uneasily with passenger journeys, not least in respect of health and safety.

Road transport accounts for most of the transport of freight – over 155 billion tonne-kilometres a year. Nearly half a million heavy goods vehicles (HGVs) ply the country’s increasingly congested roads, along with a rapidly growing number of light goods vehicles – there are already over 4 million on the road.

In the age of the internet and online shopping, they move letters and approaching a billion parcels for the Post Office, Royal Mail and a plethora of large and small courier operators. They also deliver increasing volumes of food and other goods direct to people’s front doors.

All of this has of course increased markedly since the Covid-19 crisis began, fuelling a trend that had already seen a huge growth in what the media along with sneering politicians frequently refer to as “white van man” – small, self-employed and often poorly paid couriers.

This overwhelming reliance on road transport to keep the country functioning is a growing problem. All these goods vehicles contribute to increasing road congestion, which in itself means less efficiency and greater fuel consumption, leading to greatly increased costs.

Pollution from diesel emissions in particular is also a growing problem, with alternatives like battery electric goods vehicles probably decades away and carrying their own limits on sustainability. And heavy lorries are big contributors to highly damaging particulate pollution from tyres.

HGVs have progressively grown in size – economic pressures and EU directives have forced up the maximum permitted weight and length of trucks to 44 tonnes and 18.75 metres in length (over 60 feet). While very large vehicles are fine on motorways and modern roads, they often use roads that have barely changed in the last century and are totally unsuitable. Some towns and villages on these roads are literally being shaken apart.

It is no surprise that many want to see the road network enhanced, with more bypasses around towns and villages, and more modern roads and motorways built. But many others point to the fact that new roads tend to fill up as quickly as they are built, resulting in even more pollution. Continually increasing road space is therefore not a long-term solution.

It is notable that the Welsh administration has abandoned plans to build a relief road around Newport (Gwent) to take pressure off the congested M4 motorway, instead plumping for a much enhanced public transport alternative.

There is a case for limited strategic enhancements to the national road network, such as the Lower Thames Crossing between Kent and Essex, but the days of large-scale motorway building are probably over. What is undoubtedly a popular demand is to get a significant volume of freight off the roads and on to railways (and other modes).

Road safety is a real concern. The Campaign for Better Transport (CBT) states that HGVs are seven times more likely than cars to be involved in fatal collisions on minor roads despite them making up around 5 per cent of traffic – twice as bad as it was a decade ago. CBT compares this with the fact that cars have got much safer over the same period.

The safety awareness and competence of a significant number of HGV drivers leaves a lot to be desired. Too many blindly follow satellite navigation systems and go somewhere other than their intended destination, often ending up on a road that is completely unsuitable for their vehicle and then getting stuck.

Network Rail research recently found that 56 per cent of lorry drivers failed to plan their journeys adequately to take account of low bridges, and 32 per cent were setting off on journeys without knowing the height of their vehicle or load. This resulted in 1,787 drivers driving their lorries into railway bridges in 2019, an average of over 5 a day.

Not only does this represent a serious safety issue to road and rail users, but it causes increased congestion and is estimated to cost Britain’s economy around £23 million a year.

It is easy to blame the drivers for all of this, but it is clear that too many are employed by haulage firms that relegate the safety of the public and their workers in favour of increasing their profits.

A recent warning letter to operators from the UK Senior Traffic Commissioner recognises the scale of the problem. The relatively low level of trade union organisation in the road haulage sector doubtless contributes to it.

The average age of HGV drivers increases year on year, with more than half of them over 50 – and nearly 15 per cent are over 60! There is already a serious shortage of HGV drivers, and this could become critical in the next decade as many retire. The unsocial hours of long-distance lorry driving coupled with the isolation may seem unattractive to younger people – despite pay rates which are often above average but could be much higher if the sector were organised.

So what are the alternatives to the roads? Well, in many cases there are none. Roads will always be the principal means of getting goods to the locations where they are needed. But a significant volume of freight could be moved off the roads, mainly onto rail, but some could also go to coastal shipping and inland waterways.

‘Just one freight train could carry goods equivalent to 136 HGVs…’

Each freight train currently takes 60 HGVs off the road, on average – but with planning more could be done: just one could carry goods equivalent to 136 HGVs. The total volume of rail freight moved has slumped to 17 billion net tonne-kilometres a year from the 22 billion net tonne-kilometres achieved from the mid-1990s until 2013-14 when coal traffic to power stations quickly declined to zero.

These days, rail carries other traffic. One in every four containers arriving at Britain’s ports such as Felixstowe are carried inland by train.

Rail is a much safer means of transporting freight than road, particularly hazardous materials such as nuclear waste. An increase in rail freight would see fewer HGVs and less congestion on roads leading to safer roads and less pollution.

Rail is more fuel efficient. And while there is a substantial network of electrified railways, many more could be electrified with the benefit that the electricity can increasingly come from clean non-polluting alternatives like renewables and nuclear.

That means that the additional capacity provided by the construction of HS2 is still badly needed to allow more freight trains to run on the West Coast Main Line in particular. The Covid-19 crisis passenger downturn may prove to provide a welcome opportunity for more freight trains to be run before HS2 opens for traffic.

That is why Logistics UK (formerly the Freight Transport Association), the body that speaks on behalf of all the players in Britain’s freight transport, fully supports the construction of HS2. Its report on HS2 says “the full HS2 network will create space on the existing rail network for up to 144 extra freight trains per day, enabling more freight to travel between Southampton, London Gateway, Felixstowe, the Midlands, Ditton, Trafford Park and Scotland, all vital routes for supply chains.”