The fight for a future 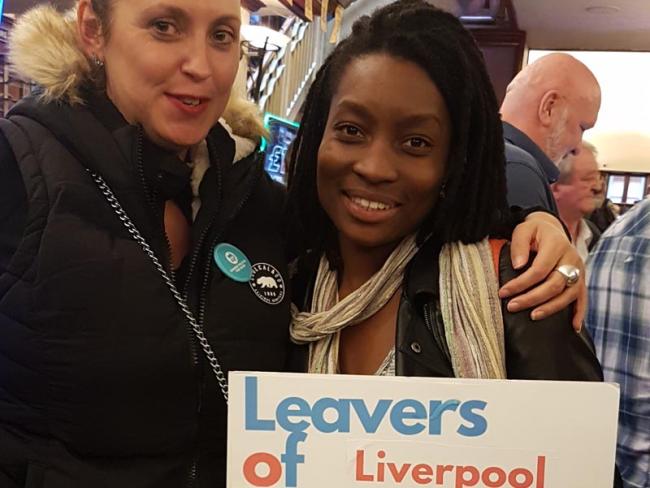 Liverpool leavers at a rally in Manchester, October 2019. The bedrock of support for British independence has continued since the June 2016 referendum. Photo Workers.

Free at last. But how to use that freedom? That is the question facing the British working class. And the answer can only come from workers, united as a class.

For or against Brexit? That doesn’t matter any more. What does matter is how we face the future.

British independence from the EU comes at a time when the independence of all countries is under attack. The world is full of think tanks and well-paid politicians telling us sovereignty is a thing of the past.

What does it even mean, they ask? But look around you, and it is crystal clear why workers – in all countries – need national sovereignty and independence to exercise the control they need to live decent lives and plan for a decent future.

Ranged against the workers of the world are the global corporations and banks, whose power and reach has never been greater. Walmart, the world’s biggest supermarket company, has annual sales of around $520 billion – about the same as Poland’s annual GDP. If it were a country, Walmart would be in the world’s top 25 for GDP. Saudi Aramco, Amazon, Apple and Microsoft are each valued at over $1 trillion.

These companies have only one interest: to sell whatever they want, at whatever prices they wish, in every country. Literally. That’s what they mean by a “free trade agreement” – freedom for them.

Take Walmart’s submission to the US government in 2013 about the Trade in Services Agreement then being negotiated with the EU. It pushed for the agreement to specify “no restrictions on store size, number, or geographic location” and “no merchandize restrictions”, including the right to sell tobacco and pharmaceuticals.

And then there’s health. Globally, by far the biggest market sector is that for healthcare, estimated at around $12 trillion a year. It dwarfs other sectors – vehicle manufacture, sales and parts together account for around $8 trillion, for example. But sadly for the corporations, most of the world’s healthcare is run by governments. The corporations want that to change, to turn health from a service into a profit centre.

Four of the world’s 25 biggest companies (by revenue) are in healthcare, all based in the US. No wonder there’s plenty of lobbying money behind the concept of the single European health market. The EU has just taken a huge stride towards that, using the lever of public health to increase health funding in the next budget period from €1.7 billion to €5.1 billion and grab areas of competence from member states.

Thankfully, Britain is out of that particular mess. But that won’t stop the corporations and their globalist allies – in all the parliamentary parties – from seeking trade agreements which enable the US to exert maximum pressure to open up all markets to their goods and services.

‘The unavoidable conclusion is that workers must wrest power for themselves…’

For workers in Britain, a key task now is to ensure that freedom from the EU is used to prevent enslavement to the corporations through free trade agreements.

Some say that profitable corporations make for a rich society. The facts say otherwise. All over the world the super-rich are appropriating a rising share of income and wealth. The rise in company profits over the past decades has been achieved by a reduction in the proportion of revenue paid out in wages – a process well documented in the US.

In July last year two economists working for the US Federal Reserve Board published a devastating paper entitled Market Power, Inequality, and Financial Instability. In dry, analytical language they show how “real wage growth has stagnated behind productivity growth over the last four decades and, as a result, the labor income share has declined”.

They go on to highlight the correlation over the period since 1980 to 2018 between rising profits and the decreasing share returned as wages. “This correlation suggests that the rise of the profit share and the fall of the labor share may have been driven by a common cause,” they say.

That’s capitalism for you. How have the corporations managed to depress the share of wages? The Federal Reserve paper points to the size of the US monopolies: big enough to set the wages they want. On this side of the Atlantic, at least, there is another factor at work: the huge increase in  the available supply of labour through encouraging mass migration from lower-income countries to richer ones.

In this capitalism has been aided by the EU’s principle of free movement of labour – one that has seen poorer countries such as Romania stripped of their skilled medical personnel. And then there is the World Trade Organization, whose General Agreement on Trade in Services has a little-known section called Mode 4 to facilitate the flow of skilled labour across borders.

So here’s another task for workers in Britain: to ensure that liberation from the EU’s free movement does not turn into reliance on importing labour from outside the EU. True internationalism is about maintaining skill and living standards through training and employment here, not the new colonialism that devastates the supply of skilled workers abroad in countries that desperately need them.

To say that’s not going to be easy would be an understatement. The government (like, it must be said, many governments before it) has shown no sign of limiting non-EU migration. Quite the reverse.

In this the government is backed by the full weight of the establishment, including the Labour Party. And aided by so-called leftists who try to shut down any debate about migration or sovereignty as “fascist” – a phenomenon dealt with by Brexiteer and former (presently disbarred) Fire Brigades Union executive member Paul Embery in his new book Despised: Why the Modern Left Loathes the Working Class.

Here, then, is the crucial challenge facing the working class: How to take the control repatriated to Britain and wield it in the interests of the people of Britain. The unavoidable conclusion for workers is that they must wrest control for themselves. We are so close to the levers of power already that we could reach out and grab them – if we choose to organise to do so.

As outlined in the editorial in this issue (see page 2), there’s ample evidence from the response to the Covid-19 pandemic that workers are utterly capable of organising society themselves. All that is lacking is the will to do so – and that will should have been strengthened by experience during the pandemic.

Workers can no longer dodge the issue of power. Each small step in exercising control, from the plans put forward by the industrial unions for manufacturing and employment to the demands of Britain’s fishermen, must be celebrated and used to encourage others. From small movements larger ones will grow.

Certainly, any idea that the Labour Party will represent workers is dying a long-overdue death. But it is not enough to bid farewell to the Labour Party. Along with abandoning the decades-long compulsion to support Labour must come the realisation that the whole ideology of social democracy must be junked.

Only the working class can save itself, and to do so it has to embrace British independence – and save the nation.

Tech sovereignty and the working class
Ministers plan yet another insult to Brexit
Keep land for food
Minerals and the future: the new dig for Britain
Energy security – essential for independence