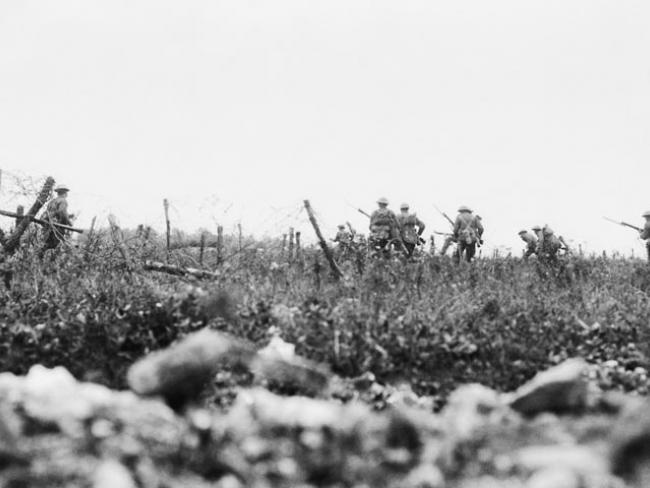 British infantry from The Wiltshire Regiment attacking near Thiepval, 7 August 1916, during the Battle of the Somme.

The First World War was a far-flung war between imperialists. It inflicted terrible slaughter on working people, causing an estimated 17 million military and civilian deaths with a further 20 million wounded.

Before the outbreak of war in 1914, the world had been through a period of unprecedented economic and colonial rivalry. The economic fortunes of the great powers had shifted rapidly. And there was a massive upsurge in working class activity in many European countries.

Alongside the intensifying conflicts and rivalries of the capitalist empires a rigid set of imperial alliances developed, which locked the market competitors into implacable opposition and inevitable hostility.

This was a time of rising and declining capitalist powers, a dangerous mix of emerging and waning imperial forces. They strutted across the world looking for advantage, both economic and territorial. The capitalist powers of Europe also competed for colonial expansion especially in Africa and the Far East.

These imperialist rivalries necessitated a rapid growth of militarisation, best exemplified by Germany’s attempt to rival Britain as the world’s greatest naval force. That led to a shipbuilding arms race.

And as is the case today, financial capitalism’s pursuit of profit was the main force driving bourgeois politics to its own ends – whether nations were ruled by parliaments or royalty.

Relentlessly, the powers across Europe divided into two rival alliance systems that were based on distrust and competition. These were the Triple Alliance (Germany, Austria-Hungary and Italy) and the Triple Entente (Britain, France and Russia).

By August 1914 these alliances dragged nations into war on the most specious of grounds. Quickly the war spread to practically all European countries because of the hidden alliances. And with the great powers’ empires, the colonies also entered the war; so it soon became a world-wide war too.

‘The real war aims were rarely, if ever, proclaimed by the great powers.’

The world war was not entered into by belligerent rulers to defend “plucky Belgium” or to protect Serbia. These were just helpful excuses to hide the deeper currents at work and trigger general warfare. The real war aims were rarely, if ever, proclaimed by the great powers. They sought territory and spheres of influence, trade and profit advantage, control of raw materials and trade routes. And above all they wanted political, economic and military domination of more vulnerable nations. In other words they ruthlessly pursued their pre-war aims.

The only force that might have prevented the outbreak of world war – the working classes of Europe – did not do so. The social-democratic Second International had declared grandly in 1907 and 1912: “Should war nevertheless break out, it shall be the duty of the social democracy to work for a speedy peace, and to strive with every means in its power to utilise the industrial and political crisis to accomplish the awakening of the people, thus hastening the overthrow of capitalist class rule.”

The reality was different. As the brave German communist Rosa Luxembourg observed in 1915, “The first thunder of Krupp cannons in Belgium welded Germany into a wonderland of social harmony.” It was the same across Europe, with a working class retreat into “defence of nation, defence of empire”.

Working men in uniform killed each other in the “methodical, organised, gigantic murder” of world war rather than strive for social progress. The major social democratic parties of Germany, France and Britain rushed to vote for war credits and clamoured against fictitious enemies.

Arms and munitions companies profited from sales to both sets of combatants. They even cooperated on armament products, as was the case with Krupps and Vickers. In armaments the profit motive trumped patriotism and traduced morality. A war that lined the pockets of arms companies and their shareholders shattered communities and devastated families across the continent.

For the first two years in the British Army, particularly in the infantry, Pals battalions were raised from workers who had enlisted together in local recruiting drives. During the Somme offensive in 1916, out of the 700 men of the Accrington Pals, 235 were killed and 350 wounded in a mere twenty minutes. The Sheffield City battalion suffered 495 dead and wounded in one day. Such dreadful losses were all too frequent.

Because total war was waged in Britain, governmental planning and direction were encouraged. That situation allowed working people to make some gains in certain areas of life – there was, for instance, a mobilisation of women into the national workforce – it did not transform the awful nature of the war itself.

Against the trend of accommodation, there were a few clear thinkers who did not cave in. For instance, German communists did their best to turn the tide, but for the most part workers’ opposition was isolated. Ultimately Lenin and the Bolshevik Party in Tsarist Russia pursued a lone path. They convinced Russian workers to withdraw from the imperialist war and make the October Revolution of 1917 instead; a breakthrough event that is still without equal.

The contemporary world shares many of the conditions that existed before 1914, and warmongering is becoming fashionable again. It is sensible to ponder on the choices and consequences of the working class response to the First World War, and be forewarned. ■