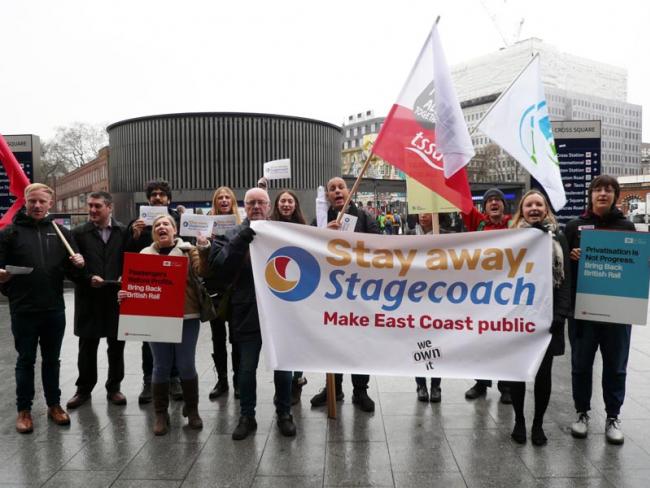 Yet more foreign firms are seeking to join the gravy train that is Britain’s privatised rail franchising system, but the system they want to be part of is creaking under the weight of its own contradictions.

Spain’s state-owned rail operator Renfe has now been added to the Department for Transport’s list of pre-qualified franchise bidders. It joins the state railways of Germany, France, Italy and the Netherlands on a list that includes firms from Japan and China – only five are British.

Also on the list are private firms Nuovo Transporto Viaggiatori (an Italian high-speed operator), and Transdev (a French operator of rail services in Germany and the USA, and many French light rail systems).

And British operator FirstGroup has been subject to a hostile bid by US private equity group Apollo Management, looking for a fast buck.

Britain’s rail industry is attractive to these new players, no doubt influenced by some of the barmier aspects of the system. One example is this year’s unusually harsh winter and heavy snowfall, when many passenger trains were cancelled. But this has proved to be a money-spinner for the private companies as the rules meant they could claim compensation from Network Rail because their trains couldn’t run.

While this compensation is supposed to be passed on to passengers, much of it is not and is retained by the rail operators. Operators in England and Wales received £181 million from Network Rail for unplanned disruption in the 2016/17 financial year, but paid out just £74 million in compensation to delayed passengers. So we have a publicly funded infrastructure owner paying private companies for the British weather.

But the privateers queuing to make profits from British fare- and tax-payers may not have things so easy in future.

The East Coast Main Line franchise seems in particular to be a poisoned chalice. The two previous private operators both had to hand back the keys after defaulting on their commitment to pay the government out of profits made from the franchise. After a profitable spell under public ownership, the current operator Stagecoach has failed dismally to honour its financial commitments and the franchise is about to fail.

Stagecoach has operated the franchise under the Virgin branding, with the Virgin Group having a token shareholding. But the Virgin magic they were clearly hoping for didn’t materialise. Stagecoach and Virgin massively overbid for the franchise, promising to pay the government £3.3 billion by 2023. Instead, losses mean a £165 million bond put up by the parent companies has been completely used up, and the franchise will come to an end three years early.

The government wants to reward bad behaviour which is effectively costing it (and the British people) billions by cobbling together a “management contract” with Stagecoach to get it through the next few years. But there has been a political outcry over this option, and now Transport Secretary “Failing Grayling” is threatened by crowd-funded legal action if this happens.

Renationalisation group Bring Back British Rail is leading this initiative, and wants to see the East Coast Main Line back under public ownership and control. Bring Back British Rail's solicitors have also said that they would seek legal intervention if Grayling refuses to block Stagecoach and Virgin from bidding for more rail franchises.

Ellie Harrison from the campaign group said: “The current Virgin Trains East Coast franchise has failed within three years yet the Secretary of State for Transport Chris Grayling is allowing its operators, Stagecoach and Virgin, to simply walk away, free to bid for rail franchises again."

This comes as bidding has been opened for a new “West Coast Partnership”, which will be running trains on the existing West Coast Main Line, and HS2 when it is built and opened in 2026.

Virgin is of course the current operator of the highly profitable services run on the West Coast Main Line, and this places Grayling in an awkward position. It means that in order to avoid banning Virgin from bidding for the new West Coast/HS2 franchise, he may well have to swallow the bitter pill of handing the East Coast Main Line back to the public sector to run.

And it is not just Virgin and Stagecoach that are in trouble. A downturn in passenger numbers after over a decade of sustained growth is playing havoc with recently awarded franchises.

Serco, which took on the London to Scotland sleeper train franchise, has lost £30.6 million. Assumptions made by others bidding for franchises have also gone awry. FirstGroup is reportedly struggling with its finances in both the South Western franchise it recently wrested from Stagecoach, and in the renewed TransPennine franchise where redundancies are being made.

Abellio has blamed the collapse of its proposed partner Carillion for pulling out of bidding for the Welsh franchise (controlled by the Welsh Assembly) – but rumours of this pullout were circulating in November, long before the Carillion mess was revealed.

Carillion was Network Rail’s biggest contractor before it collapsed. With Amey having moved in to gobble up the more lucrative contracts, it has replaced Carillion in the top slot. Despite Amey having provided a lifeboat for a majority of former Carillion staff, many skilled rail staff have been made redundant at a time when skills are in short supply. Amey is also one of the bidders for the Welsh franchise.

The absence of effective train procurement planning and the prevalence of short term thinking in Britain’s crazy rail franchising system is now seeing nearly new trains less than three years old replaced on South Western Trains at massive taxpayer expenses, to sit in sidings and very possibly be destined for the scrapyard.

Meanwhile, old London Underground District Line trains have been tarted up, given a van engine, and pressed into service in the West Midlands. Other operators may follow suit in using these recycled underground trains.

First’s Great Western Railway (GWR) has announced that it will bolster its fleet with 19 of the trains displaced from Thameslink services by new trains; these older trains are well over 30 years old. Almost unbelievably, the stated reason is that they will partially replace much more modern trains on services to Heathrow Airport.

‘A downturn in passenger numbers is playing havoc with recently awarded franchises...’

But new trains are not always welcomed by passengers. Those now running on Thameslink services through London have been slated for having “ironing board” seats and no power sockets for electronic devices!

Given that these trains are running on routes where journeys may be up to 3-4 hours, it is unsurprising that a train that seems to have been designed to modern (and spartan!) metro standards more suited to short distance commuter routes has gone down so badly.

Transport Minister Jo Johnson has been ridiculed after inflaming feelings further by suggesting that the hard seats on Thameslink will become more comfortable with use. One social media user described his comments as "blithering twaddle"!

The lack of planning by the government coupled with its knee-jerk cancellation of the planned electrification of the Midland Main Line from London to Sheffield has created a train crisis. The old former British Rail high speed diesel trains currently operating many services can’t be used after next year as they will not have their slam doors replaced by power operated doors as required by law. There is now no time to convert them by then, and there are no suitable trains available to replace them now that the line will not be electrified – any new trains will only be available after 2021.

“Failing Grayling” has now been shown to have cancelled the electrification to save money, not for the unconvincing reasons originally proffered. He originally said that the development of trains that could run on both electricity and diesel power renders electrification superfluous. Critics have pointed out that the new generation of such “bi-mode” trains are more expensive to build, will perform less efficiently, will be heavier creating much greater track wear, and therefore more expensive in the long term. And such trains contradict the government’s stated aim to abolish diesel trains by the 2040s.

It is little wonder that the calls for returning Britain’s railways to public ownership grow ever louder!