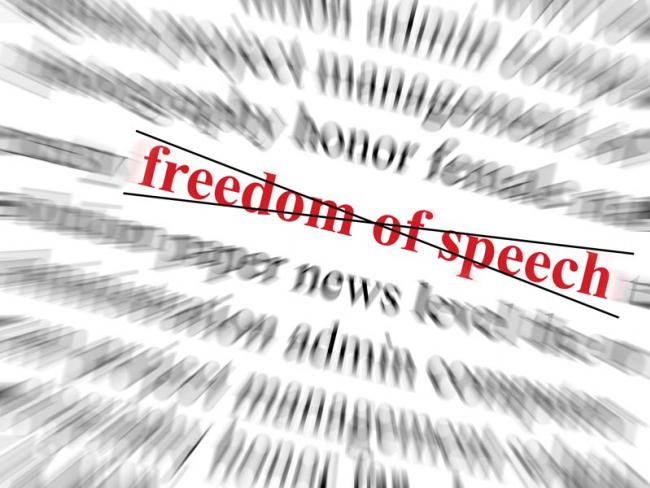 Increasingly, media ownership and a growing unwillingness among a minority to tolerate diversity of thought are threatening open debate for our class. It’s an unwelcome and damaging development…

Freedom of speech is a vital freedom, but it is under attack. The freedom to speak, write or broadcast, to express one’s thoughts, even to state facts, cannot be taken for granted.

In one respect little has changed. Karl Marx noted in 1844 that civil rights, the rights of the individual, the atomised individual, are “completely destroyed” when they come into conflict with the political rights assumed by the state. That’s always happened, and still does.

The state even has a formalised mechanism for restricting the press, the Defence and Security Media Advisory Committee, which tells British newspapers and broadcasters what they can and can’t say. D-notices, as they are called, have been used several times to hide the extent of government monitoring of private communications, and associated collusion with the US.

And of course, capital, the private ownership of the means of mass communication, limits freedom of expression because it seeks to monopolise it and because the owners of mass media dislike attacks on the basis of capitalism.

Some newspapers do at times publish hugely important ideas or information. It was the Daily Express which in 1967 exposed government snooping on private communications, for example.

What’s more, the right to say what you think of the behaviour of other persons – and in law across Britain that includes the behaviour of corporations – has always been limited by the laws of libel and slander. And money (or rather the lack of it) means that in general only the rich can go to court to pursue or defend a libel action.

The newer, social, media that enable people to communicate directly with many other people are privately owned as well. Does that matter? Yes, it does, because they are accountable not to society but to their shareholders.

One of the most unaccountable is Facebook. It claims to have 42 million users in Britain, so it matters a lot.

A speaker in an online briefing held by the Association of British Science Writers this summer noted: “…Facebook’s rules have become increasingly opaque, arbitrary, complex and as a result our reach over Facebook has declined dramatically, for reasons we can’t control. Facebook already charges you to reach your own audience. Yet now promoted posts are frequently blocked due to policy violations.

“We can’t see what these violations might be. We can’t appeal without risking account suspension, and if you appeal this is counted against you.”

That was no subversive speaking. It was the managing editor of a website run by an intergovernmental organisation that provides information and advice on agriculture and science for developing countries.

Governments and the media are being urged to bring in regulations to clamp down on fake news. Of course, there definitely is fake news. But who can be confident in the goodwill or even ability of governments and corporations to define it?

Look, for example, at Facebook’s banning of suggestions that the Covid-19 virus might have originated in the Wuhan Institute of Virology – because that’s what Donald Trump was saying. But after Joe Biden started saying that the idea should be investigated, Facebook lifted its ban.

The Brexit referendum campaign was a clear example of what the establishment considers fake news. That’s why the campaign against fake news is not beneficial, but is in reality a threat to freedom of speech – and ultimately limits the working class from freely associating and discussing ideas.

Now there is a new, insidious threat to freedom of speech. It’s coming not from the traditional enemies, the state and capital. It is coming from within society, mostly from an admittedly small number of workers who should know better. It is enabled by social media. And it is very much a 21st-century problem.

In 1999, when the Internet was in its infancy, a high court judge ruled: “Free speech includes not only the inoffensive but the irritating, the contentious, the eccentric, the heretical, the unwelcome and the provocative provided it does not tend to provoke violence. Freedom only to speak inoffensively is not worth having.”

According to a report for the Adam Smith Institute last year, this view “no longer prevails among the English judiciary”.

At first sight, nothing has changed. The Racial and Religious Hatred Act of 2006 explicitly says that nothing in the Act “...prohibits or restricts discussion, criticism or expressions of antipathy, dislike, ridicule, insult, or abuse of particular religions, or the beliefs or practices of its adherents.”

But that ignores changes in case law: judges have been making grey areas larger and greyer, specifically around language that can be said to be abusive or cause distress.

Five years after the 1999 case, for example, judges upheld a conviction against an evangelical preacher for showing a sign saying “Stop Immorality. Stop Homosexuality. Stop Lesbianism” on the grounds that a few individuals had felt either insulted or distressed by the sign.

Now we also have the new Hate Crime Act in Scotland, which massively expands the areas where you can be legally liable for insulting and distressing others: not just about religion but also age, disability, sexual orientation and transgender identity.

“Holyrood rejected an amendment to protect women as a group, presumably because it is now phobic in some way to say that women exist.”

But note, the Act does not protect non-transgender identity: Holyrood rejected an amendment to protect women as a group, presumably because it is now phobic in some way to say that women exist. And these offences can now be committed in private in your own home, in Scotland, even if no one outside the home can hear what is said – a first for Britain.

What is driving these changes in law, this drift into criminalisation of the expression of opinion? Is it what people want? Or is it a tiny vocal and unrepresentative minority amplifying their voices through the media?

Communists are used to expressing opinions that others don’t agree with. But it feels like things have changed – and that the change began (though its roots may well lie earlier) with the Brexit referendum campaign of 2016 and its aftermath.

Those who lost could not accept that the people of Britain had been in their right mind when they voted to leave. So began the narrative of toxic lies, the myth that the British people had been conned.

A new myth was created: since most people had voted for Brexit it meant that most people in Britain were bigoted at best, racist at worst, xenophobic, and downright nasty – and that there could be no discussion with this dangerous majority, no debate. We’d had the referendum, and the establishment and its supporters have decided that discussion and debate yield the wrong answers.

This attitude has spread into questions of transgender identity. So we end up with a researcher, Maya Forstater, being sacked for saying a woman is a woman, that biological sex exists and there needs to be a discussion about the issue. And a high court judge saying that her approach is “not worthy of respect in a democratic society”. That ruling was thankfully overturned on appeal.

Where are the unions?

And just as, in the main, trade unions in Britain took the establishment side in the Brexit referendum, they are doing so in the gender debate. Professor Jo Phoenix from the Open University, writing in July, put it like this: “Where are trade unions when gender critical academics are under attack? Instead of supporting members, the unions form part of the problem.”

Is she right? Events at the University of Sussex in October suggest she is. And if so, is it because with most unions it’s not so much that the majority is silent, is it that the majority takes no notice of what’s going on in the unions to which they belong?

Whatever the reason, the working class needs to assert freedom of speech. Not as a hollow freedom where anyone can declaim on a street corner while people walk blithely by, but as the indispensable condition for free discussion – without which there will be no progress in Britain.

• This article is based on the introduction to a CPBML discussion meeting in September.

Take charge
The value of academic freedom
Discussion meeting (via Zoom): Freedom of speech, and why it matters
Free speech has to be defended