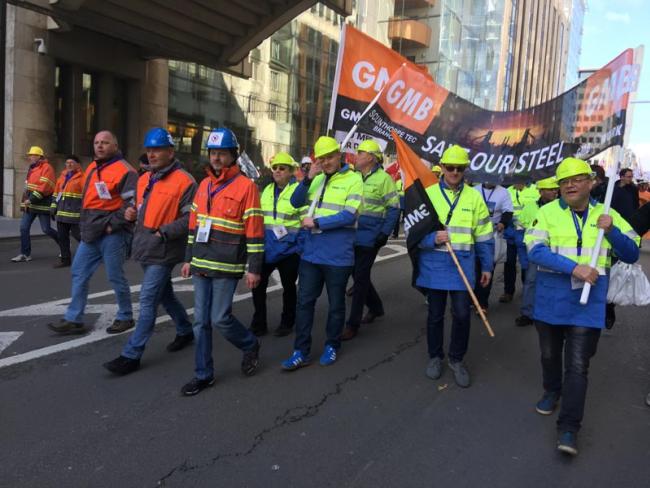 Steelworkers from all over Europe marched on the European Commission on 15 February demanding action to save the industry. Photo Workers.

Business Secretary Sajid Javid told a meeting of the manufacturing conference of the EEF (formerly the Engineering Employers Federation) on Wednesday 24 February that Britain’s crisis-hit steel industry cannot expect to be bailed out like the banking sector.

He lectured the manufacturers present that public funds would not be used to rescue steel in the way that banks were in the financial crisis: “People ask, ‘You bailed out the banks, why not other industries?’ If banks go bust the impact is felt across the entire economy.”

Gareth Stace, director of UK Steel, responded: “How can Mr Javid say steel is different from banking and not systemically important? He’s just praised the UK’s manufacturing sector, yet almost all of it depends on steel.”

What the Business Secretary didn’t mention (daren’t in the run-up to the referendum?) is that the EU won’t let the government support steel, under the EU “competition” policy that states financial support and state aid for companies from EU governments is only allowed provided it does not distort fair and effective competition between companies in EU countries or harm the economy.

‘Our government must decide whether it represents Britain or the EU.’

Our government and our Business Secretary must decide whether they represent Britain or the EU. Support for British steel production now will not harm the economy but keep an essential product that is crucial to so many manufacturing processes. The EU must be brushed aside. The interests of Britain take precedence.

Without a regular local supply of steel, the heart of manufacture, manufacturing industry would be impossible to organise. There needs to be a massive outcry of opposition from across society to this wilful policy of undermining Britain’s productive capacity. An economy cannot be successful without the capacity to engage in production. Standards of living will decline further without production.

If people are willing to defend health, the same desire should extend to steel production and manufacture. Do we want to be an underdeveloped country?

As it is in vogue at the moment, perhaps people can devise a quick electronic referendum, gauging people’s attitude as to whether steel production or banking should receive a bailout or be left to go bust. It is highly likely that the British people will overwhelmingly favour support for steel and disfavour any for speculative banking.

We want a British policy in the interests of British people, not a destructive EU diktat. Beyond media ploys, there needs to be a mass of heavy pressure brought to bear on our negligent politicians to preserve and support our real economy as in steel production by taking immediate rescue steps. We all need to get involved.