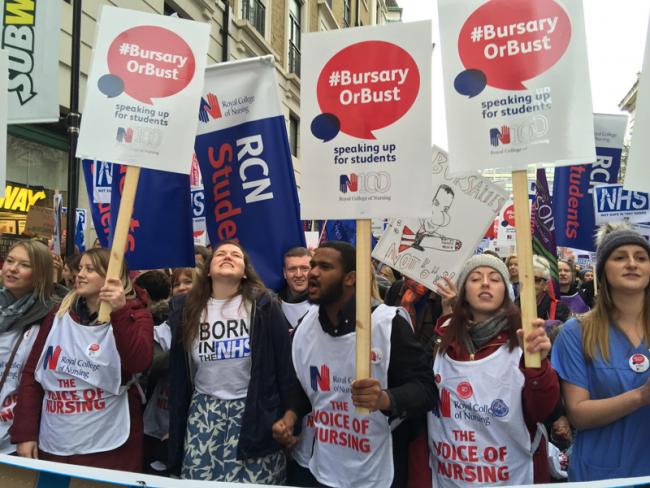 The campaign against the attack on health students’ bursaries moved up a gear on Saturday 9 January with the first national demonstration, held in London. Organised initially by nursing and midwifery students from King’s College London, it included students of both professions and all the allied health professions as well.

Students had travelled from all over England with a large contingent from Bradford, others from Plymouth, and all of the London universities were represented. The lively demonstration assembled outside St Thomas’s Hospital London where, in 1860, Florence Nightingale set up the Nightingale Training School for nurses.

The demo coincided with a report from the Royal College of Nursing showing that more than 10,000 vacancies for nursing posts in London went unfilled in 2015. The shortage of nurses worsened last year, with 17 per cent of all London’s registered nursing jobs vacant, up from 14 per cent in 2014 and 11 per cent in 2013.

‘Work is under way for a joint event involving health students and junior doctors on 10 February.’

Junior doctors were a visible contingent on the demonstration, addressing the crowd at the start and conclusion. Health students in turn pledged to support the doctors’ picket lines on Tuesday 12 January, and work is under way for a joint event involving all health students and the junior doctors on 10 February.

The demonstration culminated in a rally opposite 10 Downing Street with speeches from students of affected professions and from all the major unions representing them and their lecturers. Speakers pointed out that the proposal to scrap the bursary and impose tuition fees on health students has the potential to disrupt NHS workforce planning and thus undermine the whole of the NHS.

The electronic petition to parliament started by the health students to oppose the plan now has thousands of signatures, and has triggered a debate in parliament on Monday 11 January from 4.30 to 7.30 pm. This debate in Westminster Hall is open to the public, and the students are asking as many people as possible to join them in the public gallery.