At last - a strategy for shipbuilding 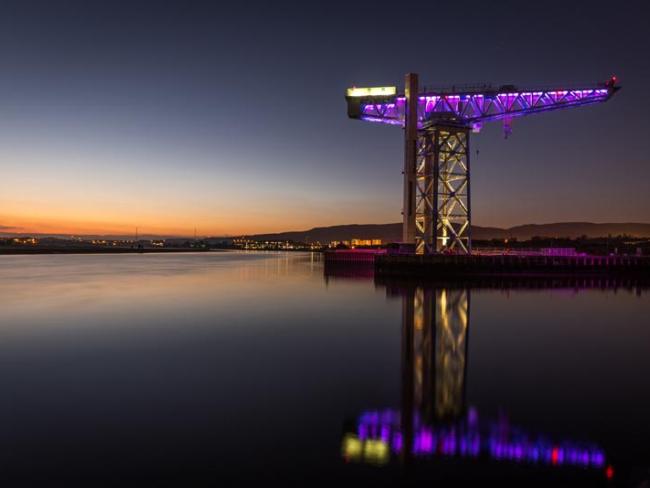 Titan crane, Clydebank: once a working crane, it has now become a giant tourist attraction. Yet leaving the EU should mark the start of a renaissance in British shipbuilding. Photo munro1/iStockphoto.com

After we leave the EU, an independent Britain will need a healthy defence industry to protect that independence. And we will also need industrial strategies for our manufacturing industries, such as shipbuilding.

Given Parker’s long experience in the industry, his proposals have aroused much interest there as they are based on recent innovation in building aircraft carriers – piecemeal in several shipyards around the country. The Conservative Manifesto pledged to “take forward Sir John Parker’s review, helping our shipyards modernise and collaborate.” Like any election pledge, it is likely to remain on paper until those in the industry hold them to it.

Parker started his working life as an apprentice naval architect at Belfast’s Harland and Wolff shipyard. He later held senior executive roles in Austin and Pickersgill and then in British Shipbuilding Corporation, becoming Chief Executive of Harland and Wolff in 1983.

His report’s conclusions, apart from the emphasis on digital engineering and a “Virtual Shipbuilding Industry model”, appear to be heavily influenced by discussions he had some years ago with shipbuilding trade unions. At that time there was no government call for a shipbuilding strategy; governments were more interested in closing shipyards and privatising the industry.

The report sees naval shipbuilding leading the way to transform both commercial and naval shipbuilding. The 2015 Strategic Defence and Security Review had confirmed the government’s intention to build eight new Anti-Submarine Warfare Frigates (Type 26) and two further Offshore Patrol Vessels. It committed the government to maintain a fleet of 19 frigates and destroyers with the stated aim to further increase this force by the 2030s through a new class of lighter, flexible and exportable General Purpose Frigate (Type 31).

If Parker’s report is accepted and it becomes the National Shipbuilding Strategy, the first step would be to overhaul the Ministry of Defence (MoD) procurement and contract process. This model has become unreliable: it takes far too long and allows costs to rise out of control. For example, a commercial mega cruiser with a displacement of 180,000 tons takes 5 years from contract to delivery; a Type 23 frigate for the Royal Navy takes 17 years.

The MoD lacks design and project management skills. Parker sets out a range of recommendations for completely changing procurement and contracting governance at the MoD. Contracts should be much tighter; there will be a Master Plan for each contract, run by experienced project managers. A Project Delivery Board, with an independent Chair, would be established to focus on delivery of the contract on time and to budget. This is industrial planning, anathema to previous governments – but essential.

The report says a national Virtual Innovation Centre should be established to challenge existing naval standards and introduce new ones. All shipyards and suppliers should invest in and embrace the full potential design and production benefits of digital engineering technology.

BAE Systems shipyards are about to start building the Type 26 General Purpose Frigate. Parker says the Type 31e, currently at the design stage, should be prioritised, accelerated and contracted out to commercial shipyards, as well as naval yards, on a modular basis.

The ships would be built in sections around several yards. This would help develop skills and practices across the whole workforce and utilise efficiencies of the commercial yards. This new ship would not set out to be a complex and sophisticated warship. It would be modern and innovative, based on a standard platform. A menu of options to customise it to meet the needs of other buyers would support exports and beat the competition. Parker also calls for government funding to allow the ships to be built earlier.

The strategy also calls for the establishment of a Virtual Shipbuilding industry model. This would bring together those regional shipyards that have shown their cost competitiveness and capability to build the fully outfitted modules, either in parallel or in series. This would capture the “learning curve productivity” benefits.

This may sound like management jargon, but it carries an important message. The industry would have to act in a united way to improve its skills, knowledge and productivity levels – no bad thing.

A lead shipyard, or alliance of yards, would be responsible through the Virtual Shipbuilding model for building and integrating the Type 31 modules, with the incentive of delivering the contract.

This plan should transform shipbuilding in Britain after we leave the EU – and the methodology could be used to develop other British industries. Parker quotes Jaguar Land Rover as an example of the creative use of digital engineering. That company has a process of integrating data about a potential product into a world of digital imagery, capturing the data and creating 3D geometry, imagery and documentation for customers to interact with and use in their own plans.

So the plan is, in reality, to bring British shipbuilding into the 21st century and to become a world leader in this technology. Clearly, this is the type of thinking we need to apply to industrial strategies across the board. As the plan is to focus on exporting the Type 31 warship, it could set an example to other industries and reduce Britain’s trade deficit.

Parker’s emphasis is on working with trade unions to develop this model, particularly to re-skill the workforce and to develop modern apprenticeships. He suggests that managers, supervisors and trade union

representatives be trained in the power of digital engineering, design for manufacture.

Shipbuilding has a long supply chain and is vital for the regional economies where shipyards are significant employers. There are some 15,000 direct jobs in the industry and around 10,000 indirect supply chain jobs, with shipbuilding and repair bringing an estimated £1.5 billion added value to the economy.

But it’s not only for defence that independence could see a revival of British shipbuilding. When we leave the EU’s Common Fisheries Policy (CFP), our exclusive maritime economic zone will increase to 200 miles.

Three key issues point to the need for investment in shipping. The first is the capacity of the British fishing fleet to make maximum use of the 200-mile limit. The fleet has lost 650 vessels since the turn of the century, due to the CFP. As of 2014, the fleet consisted of 756 vessels of 12 metres or more in length. Only 120 of them are suitable for catching white fish like cod, haddock and whiting. The remainder are used for catching shellfish, herring and mackerel.

It follows that we will need to expand that white fishing fleet and build a significant number of modern fishing vessels. This could see a rebirth of the boat building industry.

The biggest ship on the UK fishing registry is actually a Dutch ship, the 5,600 tons mid-water freezer trawler Cornelis Vrolijk. She catches 23 per cent of the English fishing quota and lands the catch at Ijmuiden, near Amsterdam in the Netherlands! When we leave the CFP, the quota system that allows ships from other EU countries to fish in our waters will end. There is no reason why Britain could not build ships like the Cornelis Vrolijk to fish in our waters.

The second reason for investment in shipbuilding is fisheries protection. With the new 200-mile limit Britain will need more Fishery Protection Vessels. At present there are just seven such ships – one based in the Falkland Islands, three in Portsmouth and three in Scotland.

Apart from the lunacy of sending one of them to the Falklands, this is clearly insufficient to police the new fishing limits. As the vessels are built by Vosper Thorneycroft in Southampton, there is no reason why Britain couldn’t double the size of the fleet.

The third issue that will create investment in shipbuilding is control of our own borders. We are an island nation. To protect our marine borders from illegal smuggling and migration, we will need to build another squadron of Offshore Patrol Vessels, possibly in conjunction with the Fishery Protection Vessels.

So imagine the potential benefits of all this. Long-term skilled work for shipyards and boatyards, state-of-the-art digital engineering making Britain a world leader, thriving coastal and fishing communities, and an expanding supply chain for ship and boat building industries.

And if we insist on using British steel and other components where possible, we could expand the steel industry. Not to mention the value of the enlarged fishing catch reducing our need for imports and increasing exports, including the Type 31 frigates. So this should be Britain’s future outside of the EU, but it requires planning, which is also only possible outside of the EU.

Unions like the GMB, which have steadfastly supported British manufacturing and skilled jobs, must rise to the challenge that these new developments promise. At the 2017 GMB congress in June, the union made a start by accepting the result of the EU referendum. Its Central Executive Committee told congress that the union was “already working on meeting the challenges and grasping any opportunities” that leaving the EU may bring.