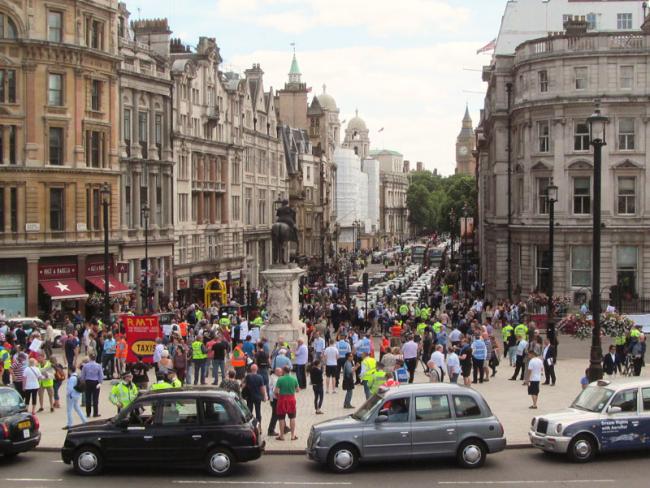 London’s licensed taxis have been protesting this month against a new car park for private hire at Heathrow airport. The car park is being trialled after complaints by local residents about Uber drivers clogging up their streets, but the licensed drivers say it gives the Uber cars an unfair advantage.

It’s the latest argument in Britain about Uber. CPBML News has been speaking to a black cab driver about the controversial app-based transportation network. This is what he has told us:

The US international smartphone app based transportation network company known as Uber was founded in 2009 in San Francisco. Within a short space of time expanded internationally attracting investment from the likes of Goldman Sachs and is now estimated to be worth over $60 billion worldwide.

“The sight of a Toyota Prius coming at you the wrong way down a one-way street is now a familiar one.”

In London this company has attracted media attention and much of it negative. It relies on an army of private hire drivers who have very little if any topographical knowledge of London and who are totally reliant in many cases on a satnav or being instructed on the route by their passenger. The sight of a Toyota Prius coming at you the wrong way down a one-way street or changing lanes without warning in front of you is now a familiar one.

But to the smartphone-wielding Uber app user this service gives them convenience and is mostly cheap – apart, of course, from when Uber operates its “surge” pricing based on supply and demand to attract more drivers when the use of the app increases and prices go up.

Some users will tell you they never had this service before, even though many have never used traditional black cabs or existing minicab alternatives anyway.

Should Uber achieve a monopoly on this market, who is to say it will remain cheap? A smartphone generation has arisen in which in some cases their entire life revolves around this hypnotic device, once only used for making a call. This increasing dependence plays right into the hands of capitalist organisations such as Uber and their investors.

So, how does this affect the existing market and in particular, licensed taxis?

In London we operate a two-tier system: only black cabs can accept an immediate hiring, whereas minicabs must be booked in advance through an operator. This important distinction sets the framework for working practices between them. The familiar sight of a black cab with its orange “For Hire” light distinguishes it from minicabs as black cabs have the exclusive right to “ply for hire”, something private hire cars including Uber are not allowed to do by law.

Taxis, also known as Hackney carriages, have been plying for hire in London for nearly 400 years, and the legal term “plying for hire” was first used in The Hackney Carriage Act of 1831. Black cab drivers have completed the “Knowledge of London” which can take three to five years, and have criminal and medical checks to confirm their suitability.

And yet in law there is no statutory definition of plying for hire, even though the term has been used extensively in case. But the Home Office did agree that one of the elements of plying for hire included what is called “Exhibition and Availability”.

As the reliance on smartphones has increased, it has brought about change within the taxi and private hire trades in how cabs can be hailed. The new term “e-hailing” is sometimes used to describe getting a cab via an app. The right-on Uber passenger would no doubt use the term “Ubering”.

The heart of the problem is this: when minicab apps display available vehicles, that surely is plying for hire – which is the sole domain of the licensed taxi. So, whether the private hire vehicle exhibits its availability in the street or can be seen on a map on a smartphone, it is surely “exhibition of availability”! The advent of new technology, as convenient as it may be, must still comply with rules about whether the cab is seen – physically or virtually.

With no statutory definition of “plying for hire” the lines between taxis and minicabs have been blurred. For whatever reason, the chance to incorporate a statutory definition into law and to protect the working practices of Black cabs was missed when the1998 Private Hire Act was drawn up.

In the past year or so a number of road-blocking protests have taken place organised by taxi “unions” (to sue term loosely) to highlight the problems faced by the taxi trade including enforcement, protecting the public, private hire vehicle numbers and so on. But they all seem to miss the point: the main issue is to defend their working practices and have legal definitions so their futures are protected and written in stone. A definition would also cover and protect other issues such as passenger safety etc.

Only the Rail, Maritime and Transport Union (RMT) has taken this forward with constant campaigning within the taxi trade. It has also used its parliamentary access to put forward an Early Day Motion along with lobbying, open meetings, and newspaper and blog articles.

“Individuals must put their personal politics aside and understand that class struggle has now come for them.”

If the licensed taxi trade in London wishes to ensure its survival and continue to “ply for hire” for another 400 years these individuals must put their personal politics aside and understand that class struggle has now come for them. Their labour will no longer be required as this new technology age will enslave them unless they act soon.

If licensed taxi drivers can wake up and see the benefits of activism within a real trade union they will have a chance. The Uber problem can be curtailed. They must get behind a political campaign to define their working practices that they studied the knowledge for years to earn the right and privilege to pick up the public whether it be via an app or on the street. Define “plying for Hire” and there will be no Uber v black cab.