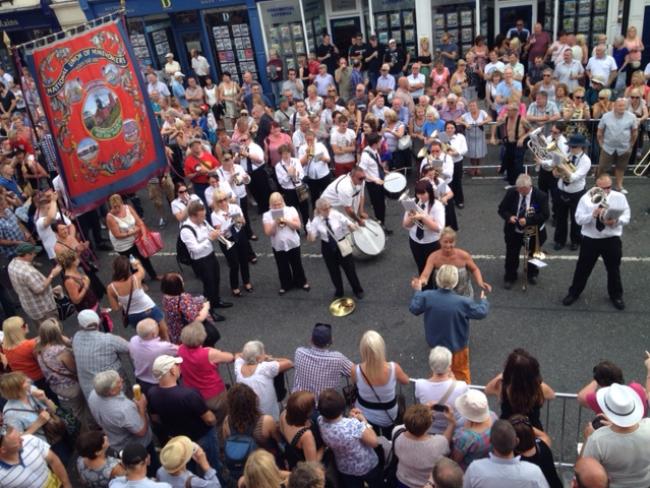 Celebrating at the 2014 Gala. Photo Workers.

The annual Durham Miners Gala started life as a celebration of mining communities but it has become a celebration of trade unionism and working class values. This year’s Gala on Saturday 8 July has much to celebrate and look forward to.

In the early nineties, with the closure of all the coalmines in the Durham coalfield, the Gala faced an existential crisis. But it survived and developed thanks to the efforts of regional trade unions, individual trade unionists and well-wishers.

Attendance has risen to record highs in recent years. The Gala continues to feature brass bands, banners from the historic Lodges of the Durham Miners Association along with regional and local trade union banners. Groups of workers from all parts of Britain and beyond make their way to Durham for this festival of solidarity.

The Gala this year will be after a General Election called in the wake of the referendum on 23 June last year on whether or not Britain should remain in or leave the EU. In March the government triggered Article 50 of the European Union’s Lisbon Treaty. This will take Britain out of the EU, giving effect to the decision of the majority who voted to leave the EU.

‘When the working class acts in unity, it can move mountains.’

The government was so shocked by the result of the referendum that David Cameron resigned, first as Prime Minister and then as an MP, just in time for him to be seriously criticized for his 2011 adventure in attacking Libya. Cameron’s resignation as Prime Minister was swiftly followed by the sacking of his Chancellor of the Exchequer, George Osborne.

The overwhelming vote for independence from the EU, in County Durham alone was Leave 153,877 compared to 113,521 votes for Remain, in spite of the strong Remain contingent of the Durham University student community. This reflects the vote across the North East as a whole.

As trade unionists we should uphold working class democracy and all respect the outcome of the referendum. There are those that have not accepted this and are actively seeking to undermine this democracy.

We have a name for anyone in our trade unions who tries to subvert our democratically arrived at decisions – “fifth columnist”. That term rightly applies to those trying to undermine the referendum result whether they are Scottish Nationalists, Liberal Democrats, Tony Blair, Peter Mandelson, parliamentarians, investment bankers, lawyers or from within our own ranks.

The term Fifth Column comes from the Spanish Civil War. Franco’s General Emilio Mola and his Fascist army besieged Madrid with four columns of troops. Mola claimed he had additional troops, a fifth column of the fascist Auxiliary Force dreaded by the Republicans, hidden inside the city itself. This is a fair description of those who are in the minority doing the EUs work by trying to overturn a decision made by the British majority.

We will be able to plan our economy for the first time in 40 years. You cannot plan an economy unless you know what your population is likely to be, and that depends on controlling the country’s borders.

Britain needs a new energy policy and an industrial development strategy for the 21st century. A new policy for agriculture can ensure that Britain is as self sufficient as possible in our food needs.

We can develop further education, including bringing back polytechnics and proper apprenticeships, to arm our young people with the skills they will need for the future. We will be able to determine that our transport infrastructure is based on using British industry and British made steel.

The North East economy was traditionally based on heavy engineering, shipbuilding, mining and merchant shipping all inter related. The biggest employers today are public services including the NHS, HMRC and local government plus retail and call centres. Important though these are, we need to plan for our industrial needs for the twenty first century.

Nissan at Sunderland has confirmed that the next two models will be produced at the Sunderland factory, securing its future but the vote had come too late for the Redcar steel plant, denied government intervention because of EU competition laws.

What will an independent Britain need to produce to replace our huge trade deficit with the EU? How can we make it here? These questions and more are what our trade unions should now be discussing. The EU is in terminal decline. It’s pointless to cling on to this dying, anti-democratic bureaucracy. We are striking out on our own, as part of the wider world, as an independent working class in an independent Britain.

Four years on - enough is enough
Learning how to organise again
No Russian interference in Leave vote
This year's Durham Gala – much to celebrate
Fancy That - Brexit Bloomers: No. 1