Skip to main content
Home » News/Views » The NHS: fighting inside, fighting to win

The NHS: fighting inside, fighting to win 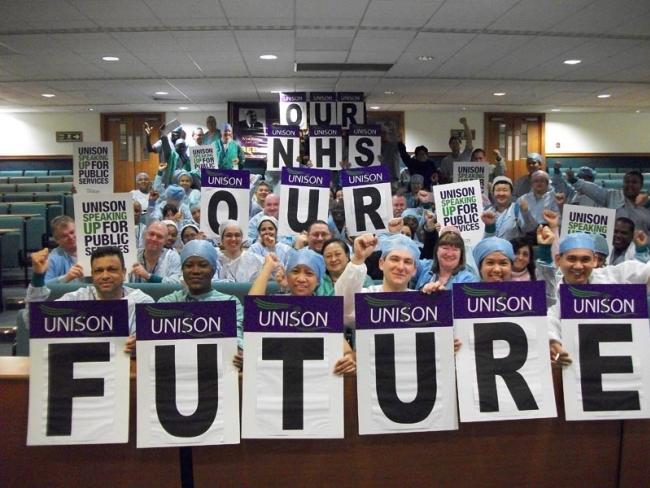 Organising from the inside: theatre staff at St George’s Hospital, Tooting, south London.

Health care is core to many things in the lives of workers. Will we die painful, drawn-out deaths, alone and poor, or will we be able to provide end-of-life care of such quality that we will be able to look forward to a happy and comfortable retirement? Health care is also crucial to Britain and its productive capacity – only healthy workers can produce the things we need as an independent nation.

But the enemy class running Britain, the capitalist class represented by this ragbag of losers known as the coalition, doesn’t care about our health. They never have and they never will. They wouldn’t have allowed us to build sewers in London if parliament hadn’t had to be closed because of the stench of effluent in the river. Disraeli throwing up into his cambric hanky finally clinched it, at least as far as he was concerned.

We, on the other hand, quite naturally care quite a bit about our health, which is why the British people are so proud of our health service, of our NHS. Proud hopefully because at least partly aware that improved health has been consciously fought for tooth & claw for hundreds of years, intensifying through time.

Some of the earliest of human organisations were attempts to ameliorate suffering, to heal injuries, to alleviate pain. Often done under the aegis of religious houses (monasteries & convents) with of course all the obscurantist trappings that were associated, nonetheless those attempting to heal and minister to our health needs were brought together with those who needed grave assistance - often assistance to the grave. Even the religious word minister derives from an abbreviation of the verb to ad-minister to people’s health.

These are older organisations even than the forerunners of trade unions, those craft guilds whose members built the cathedrals, after their forerunners the houses of care for the sick.

The inability of decent people to witness the suffering of others and not help is one of the characteristics of humans. It’s what makes us in Hamlet’s words, that “paragon of animals”. And that’s what helps mark us out from our enemy, the employing class, who will only do a thing if it’s in their interests, if money can be made from it.

It was only with the explosion of productive and social forces that was the industrial revolution that we were really able to begin to move forward.  Anaesthesia, pharmacology, sterilisation, antisepsis and the steel industry all helped transform our lives from the nasty, brutish and short existence that it was in pre-industrial times to the often nasty and brutish but longer life we currently enjoy.

‘Throughout the life history of modern trade unions, over 200 years, our forebears were calling for a health service.’

But we had to find an organisational form that would enable these industrial developments to be applied to the health of the working people. Throughout the life history of modern trade unions, over 200 years, our forebears were calling for a health service. They were often vague as to what it would look like, how and by whom it would be run, and how much it would cost, but they knew what they wanted – free health for all. Access to a doctor without having to pay for the visit.

The organisational form was found, unsurprisingly, during the war – by the doctors of the Royal Army Medical Corps – by those treating the worst of military injuries under the harshest of conditions, who realised that change had to come: it might be said that this change truly did come from the barrel of a gun. A million men under arms in 1945 were not to be fobbed off with charity, blunt knives and leftover anaesthetics. They and their doctors wanted, and now knew how to provide, a proper, modern health service. One that would be free, comprehensive and national.

The NHS was born in adversity, out of necessity and because we fought for it. It faces greater adversity, greater necessity, and will only survive if we continue to fight for it. Because of the explicitly political origins of the NHS it’s always been in the forefront of political struggle, actual or potential. Those origins, and their wartime roots, are so well known that on many occasions the NHS has been described as being “Soviet-like”.

For its first 30 years the power that led to its creation, organised labour, was such that a so-called consensus developed, which meant that all parliamentary parties supported the existence of the service on the basis of which it was established. “So-called” because a better word than consensus would be armistice. We had a stand-off without an agreement. We wanted the NHS and were strong enough to achieve it; they wanted no truck with it but weren’t strong enough to take it from us.

Now, however, we face a frontal assault. (See “The calculated ruin of the NHS”, Workers April 2011.) We will face a plethora of fragmented defensive battles. An asylum-full of windbags is shouting at us to march from Bart’s to the City, yelling from the outside that those inside are cowards. We will have to do what we can to prevent the selling off of parts of the service, although it’s worth noting that industrial action aimed explicitly at preventing privatisation is unlawful, like pretty much all other industrial action is rapidly becoming in Britain. We will pick our ground and inflict what defeats we can.

For those working in the NHS, our best chance of entering the field in our best shape is the battle for pay. This is what our array will look like.

There has already been announced a two-year pay freeze in the NHS for those earning more than £21,000 a year – a blatant attempt to divide health workers. This comes at the end of several multi-year pay deals, the last one of which was 2.25 per cent a year for three years, which in the end turned out to be above inflation. This together with the transition to the new NHS pay system, Agenda for Change, has seen most health workers better off financially than at any time before. This is now grinding to a halt. So no pay rises for two years at a time when inflation is over 5 per cent a year.

The NHS pay system provides for the majority of workers to also have an annual incremental increase on top of the annual pay rise until they get to the top of their pay band. The government has already tried to entice workers into relinquishing this contractual right but this has so far been defeated. There will be myriad assaults on pay locally. When health workers realise that they are facing an almost permanent 5 per cent per year reduction in earnings they will have to decide whether to meekly acquiesce or to find a way to do what generations of workers before them have done, fight for pay.

Pay is of course only a start in the larger struggle for the survival of the NHS, but this matter is for the entire working class. There is now a concerted, directed and no doubt prolonged attempt to convert health care back into being available only at the whim of those who wish to make money out of people’s illness and the charitable instincts of the religious.

That we will not accept.

We must take responsibility – and fight to defend what we have in order to move forward. We must all join that fight.

•  This article is an edited version of a speech given in March 2011 at a public meeting in London organised by the CPBML.