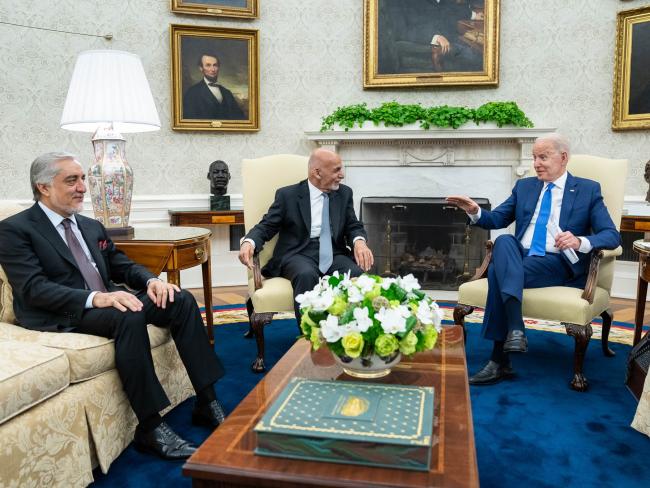 And they thought they could control events: US President Biden with then Afghanistan President Ashraf Ghani and Chairman Abdullah Abdullah on 25 June 2021. Photo: The White House (public domain).

What has been achieved by the last twenty years of British military interference in the affairs of Afghanistan? Nothing. Certainly nothing good.

After twenty years of occupation the Taliban has swept back into power without a fight. Neither the British nor the US governments had the slightest clue how quickly this would happen. But then imperialists never do understand other countries (any more than they understand their own).

Our prime minister can blame President Biden all he likes for not giving advance notice of the US withdrawal. What he cannot escape is that this humiliating and inevitable outcome results from Conservative, Labour and Coalition foreign policy in Afghanistan.

Look back to Margaret Thatcher in 1981 “invading” Afghan territory from Pakistan, providing arms to the mujaheddin, and encouraging the US to do likewise. Or Blair in 2001, like Thatcher before him acting as a malevolent imp on US shoulders and encouraging its imperialist adventures, standing “shoulder to shoulder” with George Bush over Iraq.

Twenty years of war in the name of instilling “Western values” – all have brought havoc and death to the Afghan people. And the costs here have been staggering. 457 British servicemen and women have died, many others wounded and maimed for life. The financial penalties alone are estimated at upwards of £40 billion, let alone the grieving families and the costs to Britain’s health services.

Those who argue that Britain should intervene abroad to stop terrorism here forget, or more likely ignore, that terrorism came to the streets of London and other British cities from young men born and bred in Britain, not in Afghanistan.

At the time of the 2001 invasion we wrote in Workers, “The US, meanwhile, bombs Afghani children, Red Cross depots and refugees, and occasionally the Taliban, in a war that will not destroy terrorism but will exacerbate and perpetuate that country’s agony. The war must be stopped, not because it is a war against terrorism, but because it is the opposite.” That remains true.

It is up to the working class, the overwhelming majority of our people, to reject that view. Britain must adopt an independent foreign policy – not cling on to the coat tails of the US (only to find that the US has ditched its coat) or indulge in the “great power” politics of its global Britain strategy.

There is only one foreign policy fit for an independent Britain: non-interference in the internal affairs of other countries, and mutual respect for the sovereignty of other nations. In Britain and abroad, it is only the people of a country that can solve its problems.