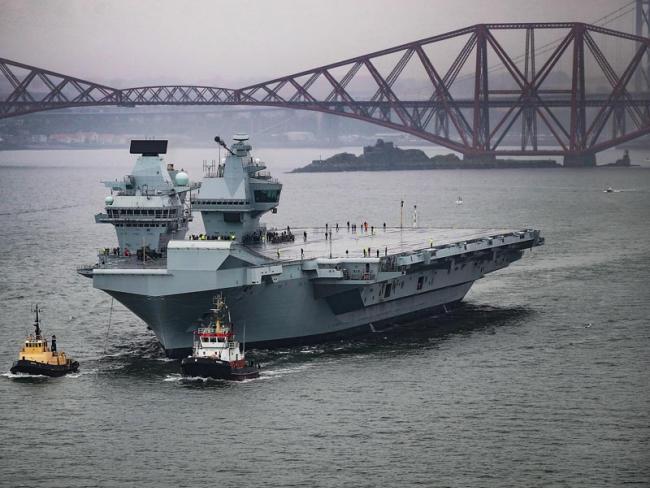 In the middle of March the government came out with a definition of what it means by the term “Global Britain”. How bad can it be? Whatever your expectations may be, prepare to have them lowered.

The government’s Global Britain in a Competitive Age: the Integrated Review of Security, Defence, Development and Foreign Policy, to give it its full title, sets out an aggressive and reactionary policy. It promises a return to “East of Suez”, a posture Britain wisely ended in 1968.

The language is telling. It says in its overview, “A defence of the status quo is no longer sufficient for the decade ahead.” This is what imperialists used to call a “forward policy”, one of even more interventions abroad.

Money is no object: the government’s 2020 Spending Review planned an extra £24 billion on defence over four years, most of it to go on investment in equipment. To put that into context, a review by the Royal United Services Institute noted it was the biggest increase in defence investment since the Korean War 70 years ago.

Global Britain promises more troops fighting more wars all over the world, creating “armed forces that are both prepared for warfighting and more persistently engaged worldwide through forward deployment, training, capacity-building and education…”

Despite drastic cuts in the size of the British Army, the government says it will deploy “more of our armed forces overseas more often and for longer periods of time”. That won’t leave many left to defend Britain if need be.

Other echoes abound. Britain may not have a Department of Homeland Security (yet), but the document has many references to “homeland security”. And what do we need security from? It’s Russia, according to the government, calling it “destabilizing”, an “opportunistic state” and “the most acute threat in the [Euro-Atlantic] region”.

Ominously, it threatens, “We will also support others in the Eastern European neighbourhood and beyond to build their resilience to state threats.” This explicitly includes Ukraine. (See News, page 3.)

You couldn’t find a greater contrast to British scientists, who have worked closely with their Russian colleagues on developing anti-Covid vaccines, with trials testing the Oxford and Sputnik vaccines in combination. This scientific and cultural collaboration is a model for how countries should act together to meet the challenges of the future.

What’s the biggest threat to our economic security? It is finance capital and its push for the free movement of capital and labour, along with its divine right to move work in and out of countries when it suits the interests of profit. It is the ever-present  reality and threat of unemployment.

But not according to the review. The government says that the biggest state-based threat to Britain’s economic security is…China. It warns of “the systemic challenge that [China] poses to our security, prosperity and values – and those of our allies and partners”.

In early 2019 the May government sent a Royal Navy frigate to the South China Sea. Now the Johnson government is to go further, with plans to deploy “supercarrier” HMS Queen Elizabeth and a carrier fleet in the disputed area in May this year. None of this is good news for peace.

The USA has 800 military bases in 90 different countries, 400 of them around China. Britain, tagging along behind, runs 60 bases abroad, many close to China, and has troops stationed at a further 85, according to a detailed investigation published in Declassified in 2020.

That, though, is not enough for this government. The review includes a pledge to invest yet more in military bases in Cyprus, Gibraltar, Germany, Kenya, Oman and Singapore.

For comparison, China has four bases abroad, according to Wikipedia – in Djibouti, Myanmar, Tajikistan and Argentina. Four too many. But all the same, four versus 860 for the US and Britain.

The review asserts, “We will remain the most engaged non-regional partner on denuclearisation by North Korea and on sanctions enforcement.” Non-regional, indeed.

The ruling class effort to drum up support for its wars of aggression by putting up demons – President Putin, President Xi Jinping – is not working. On the contrary – all the evidence is that British people oppose the USA’s aggressive posture.

A recent poll by Datapraxis and YouGov for the European Council on Foreign Relations found that more than half want Britain to stay neutral in any conflict between the USA and China or the USA and Russia.

None of the countries misdescribed as threats – Russia, China, Iran, North Korea – has ever attacked Britain.

Russia has never organised a 14-army war of intervention against Britain to try to reimpose a feudal autocrat, as Britain and 13 other countries did against Soviet Russia between 1918 and 1920. China has never forced us to import lethal drugs. Britain waged two wars against China (the second along with France) in the 19th century to make it import opium.

Iran has never organised the overthrow of our elected government – unlike the coup orchestrated by the USA and Britain in 1953. And no Korean government had ever sent its forces halfway round the world to kill upwards of a tenth of our people, unlike the US, Britain and others in the Korean War.

No wonder these countries do not trust Britain’s intentions. Why should they?

And it gets worse. The review recommends dangerous extensions of the government’s licence to use nuclear weapons, all under the cover of saying they would be used “only in extreme circumstances of self-defence”. But read carefully: that’s “self-defence, including the defence of our NATO Allies”. So not just in self-defence.

Likewise, it promises that Britain will not use nuclear weapons against any non-nuclear state that has signed the 1968 Treaty on the Non-Proliferation of Nuclear Weapons. But once again, read on: the assurance does not apply to any state “in material breach of those non-proliferation obligations”, and Britain reserves “the right to review this assurance” if the future threat of weapons of mass destruction, or emerging technologies that could have a comparable impact, “makes it necessary”.

As if all this were not enough, the review also formalises the weaponisation of “human rights”. It boasts of having introduced a new system of sanctions to target “human rights violators and abusers around the world”.

That includes being the first European country to announce sanctions against individuals associated with the Belarus government in September 2020 a month after elections there. But there have been no sanctions against the USA for the stream of police killings of black people, or Saudi Arabia (Jamal Khashoggi).

There’s a clear thread running through the report – one of support for the USA’s new world order as expressed in NATO and the World Trade Organization, as well as institutions such as the EU, ASEAN – the Association of Southeast Asian Nations (Britain is an associate member!), and the CPTPP – the Comprehensive and Progressive Agreement for Trans-Pacific Partnership (which Britain has recently applied to join).

It’s not what workers in Britain want or need. We need to focus on the defence of Britain, controlling our borders, protecting our fishing waters.

We need to build coastal protection vessels, not aircraft carriers to patrol the South China Sea. We need a defence and security industrial strategy, building ships in Scotland, armoured vehicles in Wales, aircraft in England, and satellites that Britain can control and rely on.

We need to control our nuclear deterrent, not allow the USA to control it. We need our own global positioning satellite system and our own satellite launch capability. Above all, Britain needs to cooperate with other governments, respect their different ways of life, different systems, not seek to impose the workings of British capitalism on theirs.

We should deal with them on an equal basis, not interfere in their internal affairs.

Discussion meeting (via Zoom): Global Britain - a green light for aggression?
AUKUS: the path to war
Pledge to rebuild British shipbuilding
Don't let them bargain away defence!
No sovereignty without defence