Nursing shortages: move on from the blame game 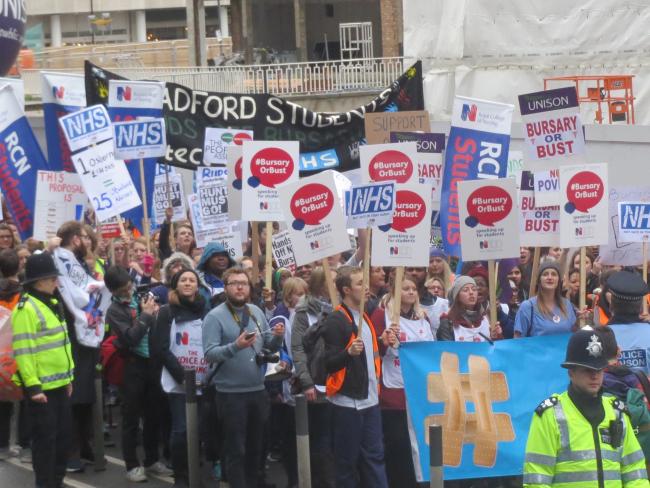 The fight for nursing education has been a long one. Demonstration against abolition of nursing bursaries, London, January 2016. Photo Workers.

Bad businesses blame external factors for their own shortcomings. The SNP-led Scottish administration is no different when it talks about nursing shortages. A more honest approach is needed, led by health workers.

Rather than face up to the growing shortage of trained nurses, made worse by their own decisions, the SNP continues to look elsewhere – at Brexit in particular. The UK government isn’t doing much better either.

On 10 September, addressing the opening day of the SNP’s virtual conference, Nicola Sturgeon said, “We are seeing across our economy and in public services increasing staffing shortages because of Brexit.” She is apparently unable to look any further, which will inhibit any useful action to address the issue.

Asked how she could blame Brexit, Sturgeon then said, “I wasn’t blaming Brexit. You put to me the issue of staff shortages and I was saying, rightly, one of the many factors putting pressures on our health service right now is staff shortages, and I’m afraid Brexit is the driving reason for that.”

One of these “many factors” includes her own decision in 2012 to cut the numbers training to become nurses and midwives. The Nursing Times reported in January 2012, “The Scottish Government yesterday confirmed that the overall nursing and midwifery student intake for 2012-13 will be 2,430 – compared to 2,700 last year and 3,060 the year before that. The 2012-13 students will graduate between 2015 and 2018.”

The article quoted Sturgeon, then the Scottish health secretary, who said, “A reduction in intake for the 2012 academic year is a sensible way forward. The intake sets a balance between ensuring the right number of nurses and midwives for the future while also minimising the risk of oversupply and graduate unemployment.”

Nursing and midwifery vacancies have been at a record high in Scotland since last March, at least partly attributable to that decision nine years ago.

The latest NHS Scotland workforce statistics, published early in September and reported in the Nursing Times show that 4,845 whole-time equivalent nursing and midwifery posts were vacant at the end of June, over 7 per cent of the total and higher than the level in March.

“Nurses have never been under greater pressure; vacancies add to the strain.”

Julie Lamberth, chair of the Royal College of Nursing Scotland board, said: “It is deeply worrying to have record numbers of nursing vacancies at a time when covid cases are on the rise. Nursing staff across hospital and community services are under significant pressure. RCN Scotland members are telling us that they have never been under greater pressure and with so many vacancies adding to the strain, we are seeing work-related absences on the rise.”

But this is not a problem local to Scotland, or even Britain. There is a global shortage of nurses, made worse by the coronavirus pandemic.

The Conservative Party made a manifesto promise in the 2019 general election of 50,000 more nurses for the NHS by 2025. Discounting increased staff retention included in that figure, the Full Fact website estimated that was still a commitment to over 30,000 new nurses.

The number of nurses in training was badly affected by the abolition in 2017 of bursaries for nurses and midwives. The present government introduced a new bursary, but nurses and midwives still have to pay tuition fees, which they did not have to before 2017.

And otherwise there is little sign of progress. The British government’s approach has concentrated more on overseas recruitment despite their lip service to the WHO ethical recruitment code in February this year.

Health workers must tackle the key issue of an under-resourced and undervalued nursing workforce. The pandemic has made it even harder to work under the pressure of staff shortages and with pay that has failed to keep pace with the cost of living. Better pay and better staffing levels must be at the heart of plans for health service recovery.