Pay: take up the fight 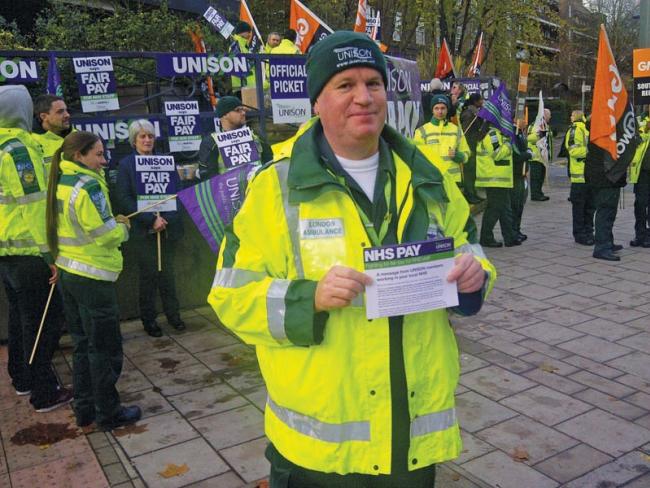 Our enemy understands the significance of our struggle for pay, even when we don’t…

When health workers realise that they are facing a continuous reduction in earnings they will have to decide whether to meekly acquiesce or find a way to do what generations of workers before them have done: fight to improve pay.

We warned about this four years ago (Workers, June 2011), in an article about NHS pay. If a union doesn’t fight for pay it invites questions about its very existence. Pay is what unions are for.

So, finally, after many years, there is a fight for pay. It has been widespread and patchy at the same time. Powerful and ineffective together. But finally workers have taken up this call.

Where do we now stand on the fight for pay? Workers’ strength was historically centred in industry, principally the engineering industry. Public service workers, if they fought at all, waited to see what settlements were made at Ford’s or Vauxhall and tried to emulate them.

No longer. That field of battle has been deserted since Thatcher’s attack on manufacturing knocked the stuffing (and most of the union members) out of engineering.

So now when people talk of battles over pay, certainly national battles, they have public services in mind. Recently there have been disputes in higher education – both lecturers and support staff; in local government, manual and non-manual; and in the NHS. Some new trends can be identified, new false fights to be avoided, and new realities to take into account.

One is a new technique for settling disputes. Rather than an old-fashioned arm wrestle over pay, using whatever tactics come to hand, a new choreography is evident. Given that the amounts now being fought over are so minuscule (2 per cent of even a £30,000 salary is only £50 a month) that settlement can be achieved by enough workers striking to save the employer the cost of the claim. Hey presto, both sides can claim a victory!

Three days’ strike in higher education for support workers enabled Unison’s claim to be pretty much met in full (in fact, the employers probably made money out of a deal the union hailed as a victory).

A similar dance is being played out in local government at the moment. If enough members go on strike enough times a deal will be done, not because of the staggering effect it will have on employers, but because enough cash will have been saved to pay the claim.

In health, though, the situation is a little different, because the struggle is not just over how much money is involved. Here the issues include the integrity of the national pay system (Health Secretary Jeremy Hunt is unilaterally trying to drive a hole through it), and even the existence of the pathetic Pay Review Body. Here a settlement based just on a few hours’ strike action isn’t an option.

‘A settlement based just on a few hours’ strike action isn’t an option.’

Another aspect of these new disputes is the longer-term effects of Thatcher’s anti-union legislation. What became known as guerrilla struggle is now more difficult to organise, and needs more thought.

The element of surprise is harder to achieve. Unions must telegraph the blows they intend to land on the employer from so far away that only a fool would be caught completely unawares.

The very act of balloting is a gift to employers, and one which workers in big national, set-piece disputes still have to find a way to grapple with. With few exceptions – the Fire Brigades Union, for example – turnouts in ballots are almost uniform, and uniformly awful. Unison, GMB and Unite all regularly record turnouts of around 14 to 20 per cent in ballots, a similar proportion to the returns in unions’ national elections. Whatever the issue, whatever the industry, whatever the union, results don't vary much.

It has been rightly argued that a low turnout, especially one “hidden” from members, makes the prosecution of a dispute flawed from the start. But this cannot be our only response.

To begin with, unions operate a form of democratic centralism (indeed, they invented it). Once a result is declared and a decision is taken by the relevant elected body, the bickering must stop. Anything else is a kind of sabotage. From the point of declaration of dispute it is all hands on deck; nothing gets in the way of the fight.

There’s hardly been a dispute in history where the number of workers who strike doesn’t exceed the number who vote to strike. Members respecting a call to action that they didn't vote for is a welcome glimpse of an understanding of how we must operate in struggle. We contribute to debate, and we vote. After that our elected leadership takes a decision, often having to apply courage and clarity against a murky, cowardly background.

This is what has happened in the current NHS dispute. Unison’s turnout in its ballot was 16 per cent, and although not uniform there were workplaces where the number of those on strike far exceeded that. The most important turnout is not in the ballot, it’s in the action.

Union leaders have to protect those organisations from adventurism and from overreaching themselves. But sometimes it can seem that “leaders” do not want workers ever to fight. Perhaps cowardice has sunk into the bones so deeply that reasons why a fight should be sidestepped have become excuses why a fight should be avoided at all costs.

A case in point is the Royal College of Nursing, and the Society of Radiographers. The nursing union held a consultative ballot, essentially asking members if they wanted to be asked formally whether or not to strike. They got a majority for striking, though on a miserable 12 per cent turnout – and promptly decided not to ballot for industrial action.

The radiographers also held a consultative ballot, and had an even worse turnout – 11 per cent. But they were keen to stand alongside the larger battalions and so proceeded to a formal ballot. In that ballot they achieved a turnout not far from 50 per cent, which any large union in today’s conditions would have been pleased with.

That figure of 50 per cent was very similar to the ballot result of the Royal College of Midwives, which after 133 years joined the ranks of organised labour in action. Just as the contribution of the Chartered Society of Physiotherapists marked the Pensions Strike of 2011, so the midwives’ entry to the fray marked the latest pay strikes as special. The proletarianisation of the “professions” continues.

Our enemy understands the significance of our struggle for pay, even when we don’t. That can be the only reason for the desperation revealed by sending in members of all three armed services and the Met police to provoke strikers in the London Ambulance Service. It was Cameron’s jibe that the 2011 strike was a “damp squib” that led to ambulance workers sticking two fingers up to him, thus bringing the service close to meltdown in that dispute.

Overall, the real turnout in October and November was weak. But not to have fought at all would have been weaker. There are enough pundits, media-mongers and flaccid-brains out there who will attack our attempts to fight our way out of decline. We don’t need to add to them with hand-wringing and a lack of suggestions about what to do next from within our own ranks.

Leadership cannot consist in eternally pointing out what cannot be achieved, and what is difficult. In this most parlous of states we must develop new ways to instil confidence while avoiding adventurism, of coming up with new ways to energise members, not demoralise them further.

Leaders of unions must now lead, and not find reasons to hide. Members of unions must now take responsibility; they must vote, strike and think about how to develop new tactics. Caution is one thing, cowardice another. Some issues are so important that they can’t be dodged, and pay is one of them.