Richard Dawkins and the dangerous delusion of religion 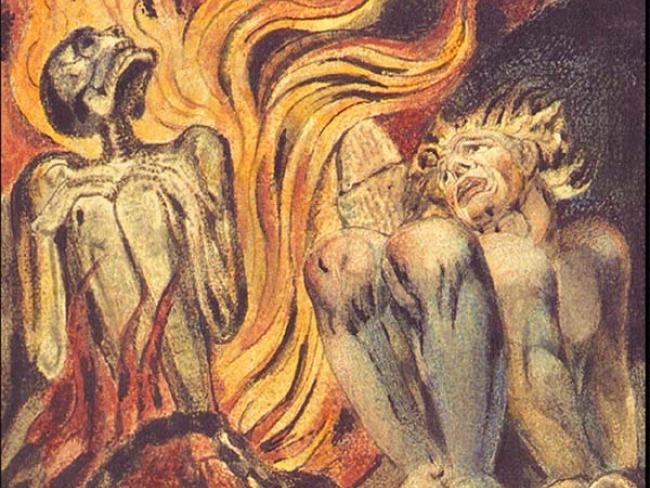 Blake's hellfire and damnation: attempts are now being made to drag thought backwards

Just how dangerous can religion be in 21st century Britain? Not many years ago you might have thought not very – in this country the "official" religion, the Church of England, is toothless and lame, knocked into submission and put in its place by an advanced, secular working class.

Well, Richard Dawkins wouldn't have agreed with you then and certainly wouldn't now. He sees religion – all and any religion from the most extreme to the mildest, with no quarter given to the C of E – as fundamentally anti-science and therefore dangerous indeed. In The God Delusion he subjects religious thought to the powerful scrutiny of the scientific mind – where's the evidence, does it stand up to rigorous examination? - and goes on to lay out the implications and consequences of religious belief.

‘There are places where you will laugh out loud, although this is a deeply serious book.’

This is a roller-coaster of a book, and a great read for anybody who is worried about the apparent growth in superstitious thinking in Britain and, indeed, anyone who enjoys the merciless yet passionate application of rational thought to superstitious hocus pocus. (Incidentally, he deals with Christianity in the US too, although we can't do much about that. Interestingly there have been some real successes there for brave people who are prepared to fight against Biblical teaching in schools. We are having less success here on this front.)

No wonder Christian creationists and god-botherers of all kinds fall over each other to demonise (literally) Dawkins. He is a lucid, materialist, Darwinist thinker and also sharply witty. There are places where you will laugh out loud, although this is a deeply serious book.

Dawkins points out that natural selection has not yet been bettered as a scientifically convincing account of our existence as human beings, of the awe-inspiring diversity of the natural world, and the magnificence of the universe as we know it at present. He of course allows that there is a great deal we do not know, but insists that all human knowledge about why and how we exist must stand the test of scientific examination.

The mark of the scientist

Religious anti-science campaigners often say that since any scientific theory can be rejected if the evidence accumulates against it, that shows that science is no more certain than religion as an explanation. Dawkins disproves this. If new evidence is found to prove him wrong, he will admit it, he says. This marks out the scientist from the religious, who can never be proved wrong because their ideas cannot be tested but rely on "faith". He demonstrates with utter conviction that Darwinism is incompatible with religious belief.

He demolishes the Bible – "a chaotically cobbled together anthology of disjointed documents" – pointing out that Christians who claim not to take chapters like Genesis literally any more are simply cherry-picking the bits they like. Why accept any of it then?

Those who cite "faith" as a justification for religious ideas might as well believe in fairies at the bottom of the garden. Who's to say this is any worse than believing that if you murmur private thoughts in your head a man in the sky will hear your thoughts and may act on them, or that if you blow yourself up along with lots of commuters on tube trains you will go to paradise to be waited on by virgins (presumably this doesn't work for women – a common fault with religions)?

Dawkins reserves his greatest contempt for those who seek to indoctrinate children with religion, without allowing them to grow up to make up their own minds. This part of the book is particularly important in a time when government is handing over schools to religious organisations while giving them freedom to teach creationism alongside scientific ideas (or hatred of Jews in a west London Islamic school). He shows how the religious are afforded great privilege and a dangerous undeserved "sensitivity" – protection from being "offended" by cartoons about the Prophet, for example ("if you say we're a violent religion, we'll kill you!").

Britain is a deeply secular society, launched on this path by Henry VIII's schism with the Pope, and progressing with an independent-thinking and materialist working class. It seems unbelievable that thought can go backwards. There is a growing divisive tendency to refer to people (including children) by religion, and for the religious to claim not just tolerance but respect for beliefs that do not stand up to any rational scrutiny. The anti-science lobby increasingly pressurises schools, universities and research institutions. The so-called "left" have fallen for this in a big way with the nonsense term "Islamophobia" being used in an attempt to dull critical thought.

A worrying miasma of confused thinking, and one which makes Dawkins's The God Delusion feel like a blast of fresh air.