RMT takes second round of action in sleeper dispute 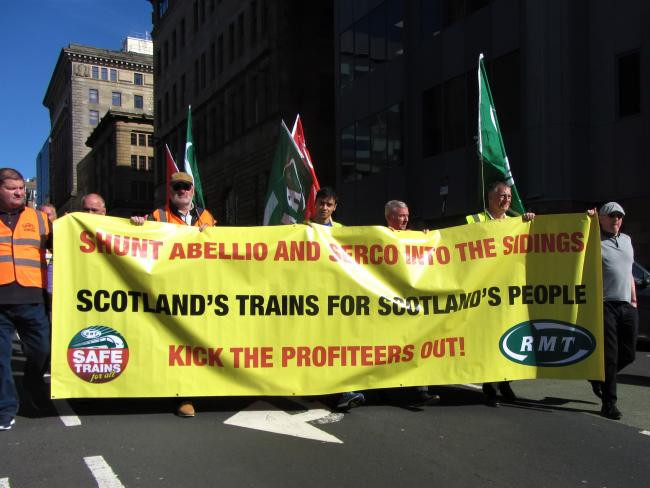 Rail Maritime and Transport union members carried out the second of two 48-hour strikes from Sunday 11 October. This brought Serco Caledonian Sleeper services to a halt until Tuesday, affecting journeys linking cities in Scotland with London and the south and forcing the cancellation of all services from and to Fortwilliam, Aberdeen and Inverness.

Talks had broken down over the RMT members’ demand to resolve issues of health and safety that focus on company’s failure to provide sufficient berths for rest periods and its inability to address the fatigue experienced by RMT members as a result.

The first 48-hour strike started on Sunday 4 October. Additional sanctions include not working on rest days or voluntary overtime, and the RMT reports solid support for the action.

RMT General Secretary Mick Cash commented “…it remains a scandal that Serco appear to have deliberately provoked this dispute and have never had any intention of entering serious talks. Instead of working with the union on a solution to the very real issues of safety and fatigue, they have declared war on their staff. That is a disgrace.”

“Serco have declared war on their staff.”

Just before the strike Cash apportioned some blame on the SNP administration, saying, “It is also wholly unacceptable that the political leadership in Scotland, distracted by the scandal of one of their own travelling on trains while Covid positive, have not lifted a finger to help us settle this dispute.”

Outsourcing company Serco has run the Caledonian Sleeper franchise since 2015, after the SNP-led Scottish Government decided to split the ScotRail franchise, further adding to fragmentation in the rail industry. That’s one of many instances where the SNP has failed in its day job. Only a few months later RMT members took strike action over dangerous conditions on the sleeper trains. There is now new rolling stock, but it seems Serco still does not take health and safety seriously.

In a separate statement, the RMT condemned profiteering in the railway industry. One of the three companies that own 87 per cent of Britain’s trains announced that it had paid £80 million to its shareholders overseas – enough to pay for more than 400 new vehicles. In the same week rail minister Chris Heaton-Harris made it clear that the government will carry on paying the rising costs of leasing trains through PFI-style contracts.

The British taxpayer will foot that excessive leasing bill in full. Mick Cash added, “These new agreements are rigged to keep the profits flowing at the expense of taxpayers, even as companies all over the network start to attack jobs, pay and conditions for workers.”