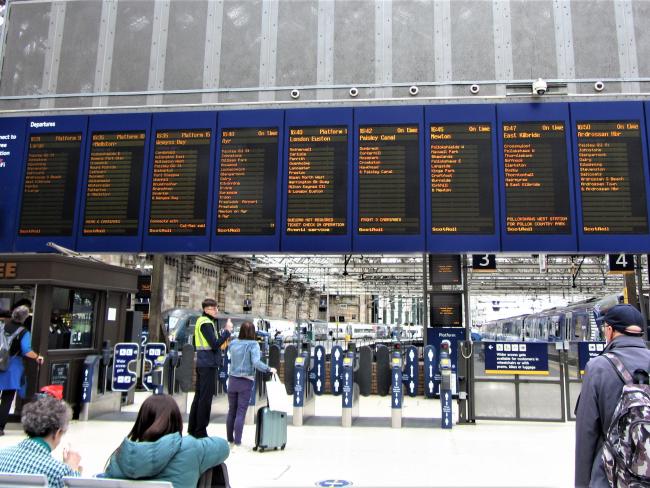 Passengers in Scotland face months of disruption after the ScotRail announcement that 700 services each day will be cut out of the timetable from Monday 23 May. Many people rely on trains for commuting to work.

Kevin Lindsay the Aslef union Scottish Organiser said: “It is disappointing that we've seen the Scottish government sanction a massive cut in the services of Scotland's railways. They should have been encouraging fair and open negotiations between ScotRail and Aslef. We certainly don’t want a strike. However, we are being forced in that direction by the Scottish government.”

“How can any business be so reliant on overtime?”

Aslef members will not work rest days, overtime or additional Sundays. Lindsay demanded to know “How can any business be so reliant on overtime?” Chronic driver shortages have been compounded by lack of recruitment and training for new drivers.

Scotrail have added to the misery by severely curtailing late trains. Some lines like Glasgow to Dundee and Inverness will have no services running beyond early evening. This has alarmed organisers and fans of sports fixtures and concerts. It has led to protests from the prime festival city, Edinburgh, that audiences would be badly affected by the lack of transport for people to go home after events.

In a letter to the Scottish government, Kevin Lindsay expressed his disappointment that they had ignored the joint trade union report A Vision for Scotland's Railways written by Aslef, RMT, TSSA and Unite. The vision of these unions following the nationalisation of the former Abellio-owned business has been rejected by the SNP-led government.

Lindsay described the situation in these terms, “Pay negotiations have been shambolic, the timetable has been slashed by one third, the economy is suffering and passengers and communities have been left isolated.” He added "The language and behaviour of Scottish Ministers has too often been inflammatory, unreasonable and factually incorrect.”

At ScotRail RMT has announced that its members in Scotland will be balloted on strike action follow what was described as a “derisory offer” of a 2.2 per cent wage increase. This was coupled with an expression of the union's anger at ScotRail's proposed timetable cuts, labelling them “a kick in the teeth” to its members.

ScotRail has made an improved offer to Aslef including a 4.2 per cent pay increase and a no compulsory redundancies for three years. This will be put to the drivers, said Kevin Lindsay.

Strikes erupt on the railways as inflation rockets
Massive vote for action on railways
Oppose the government attack on rail unions
The Elizabeth Line: a British working class achievement [updated]
No ticket to ride