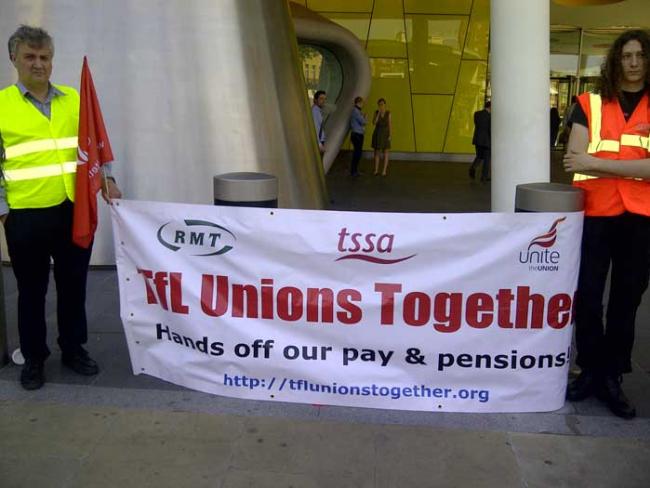 13 June: Pickets at Southwark tube station, by the Palestra offices of TfL.

Travel centres at stations across the capital were disrupted on 13 June in what the unions involved have dubbed a “let them eat cake” dispute at Transport for London, TfL. More than 1,500 staff belonging to TSSA, RMT and Unite walked out for a second 24-hour strike over management proposals to freeze pay and reduce pensions for most staff – but not for the top 300 bosses at the body responsible for London’s transport, who all earn over £100,000 according to the unions.

Standing on a picket line outside TfL's headquarters in Victoria Street, Westminster, TSSA leader Manuel Cortes accused Boris Johnson and his “Golden Circle” of bosses of acting like the Bourbons (the autocratic kings of France, one of whom met his end at the guillotine).

The unions report substantial increases in membership since the dispute began, and tell of well attended picket lines across London.