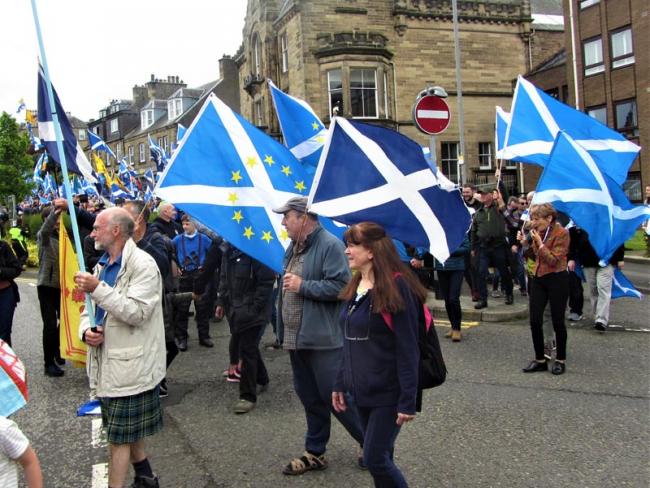 Separatist march, Galashiels, June 2019. Note the incorporation of the EU flag into the Saltire. Photo Workers.

The much-trumpeted “super-majority” for Scottish separatists never materialised when the SNP and the Alba Party faced the voters last week. Alex Salmond’s Alba efforts hardly registered – at under 2 percent of the vote it had no candidates elected. Nor could the SNP itself claim success, falling one short of a majority.

The Scottish Green Party habitually supports the SNP in Holyrood and will no doubt back its quest for another referendum and for rejoining the EU. In an act of self-preservation Holyrood appointed a Green MSP as Presiding Officer, consolidating the SNP-Green alliance.

But with a popular vote that showed a majority favouring parties that supported unity (albeit slim, separatists on 49 per cent of the constituency vote and the list vote split 50/50), the UK government will be even more determined to resist calls to rerun the 2014 referendum.

Reinforcing rejection of such a rerun are priorities such as sorting the Covid-19 pandemic and dealing with Scotland’s multiple problems such as its acute drug crisis, failing education system and massive spending cuts in the cities.

A crisis looms in energy too, with North Sea oil and gas run down and discouraged. The administration has imposed a moratorium on nuclear while promoting uncertain energy sources like tidal power, and windfarms are much promoted.

The constant threat of break-up is now starting to be recognised across Britain as a destabilising factor. Proposals to peg a Scottish currency to the pound would have the effect of undermining the British economy. It doesn’t help when former prime ministers like Gordon Brown start meddling with appeasement notions like federalism and “more powers for the Scottish parliament” – which only encourage the drive to break up.

Meanwhile, the real break up is within the separatist camp with spiteful diatribes flying between the more orthodox SNP and the defeated Alba Party. Even separatist stalwarts like those at Wings over Scotland are withdrawing from the struggle in exasperation and giving up hope of an “Indy Ref 2”.

Many workers in Scotland rejected this camp and made up their own minds to vote tactically to keep separatists out, more or less using political parties as tools. And for the first time in a Scottish election a new voice was heard raising the question of whether we need this expensive layer of devolution at all. This Abolish the Scottish Parliament party may have just received several thousand votes, but it placed the idea there, right at the top of the ballot paper.

Wales is further away from the danger of breaking from Britain, with its separatist party Plaid Cymru achieving less than a third of the votes gathered by the unionist parties. Labour, which in all its 22 years in power has never won a majority of the 60 seats available, this time found itself one short of a majority.

As in Scotland, the Welsh administration performance has been dismal, and particularly in education. Both Scotland and Wales fare poorly, especially in science, maths and literacy skills.

Both First Ministers have been let off the hook with the lack of hard questioning on their handling of the Covid-19 pandemic. Both bluster and fail in their responses if faced with strong criticism, passing the buck to central government and building an impression that they are doing exceedingly well. Now is the time for all workers in Scotland and Wales to start to see through this bluff and bluster.