A spanner in the works of the EU war machine 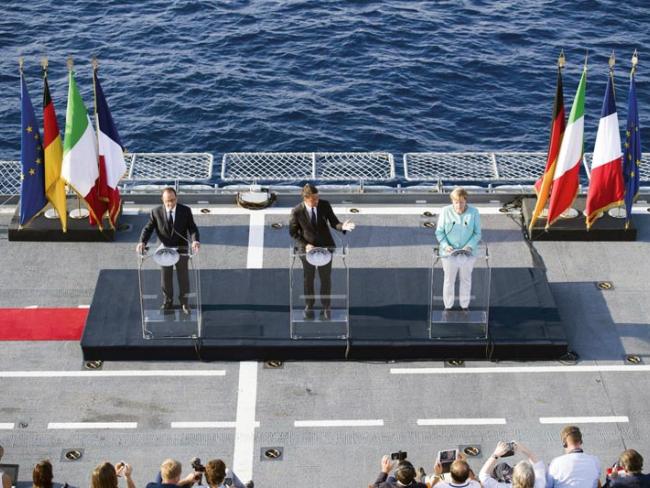 François Hollande of France, Matteo Renzi of Italy and Angela Merkel of Germany united on board a French aircraft carrier in August 2015 in a clear visual statement of intent to militarise the EU.

One of the worst lies told in the referendum was that the EU is a force for peace. The opposite is true, and the vote to leave holds out the prospect of a reduction of the risk of war…

In Britain, the leaving of the EU is the most significant political event of most people’s lifetimes. It has been likened to 1945, or even – wrongly – to February 1917 in Russia.

Yet one of the most profound implications of the vote to leave hasn’t really been much commented on, and that is the blow that Brexit struck against the plans being made for war, in particular a war against Russia. As a Party we recently released a document summing up our view of the international situation, called Britain in the World. It includes the following:

‘‘We are constantly told that the existence of the EU has prevented war in Europe. This myth was destroyed by the fact that war broke out in Europe the minute the Soviet Union collapsed and continues to this day. It was the Soviet Union that kept the peace in Europe after World War 2, not the EU.”

Today, the EU is inseparable from NATO as all applicants to the former must first join the latter. Together with the USA they are a force for war; the Soviet Union was a force for peace. Had the Soviet Union continued to exist, there would have been no invasion of Iraq or Afghanistan, no bombing of Libya and the chaos that followed, no ISIS and no war against Syria.

‘The EU has supported every war that NATO has launched.’

The BBC website says that the EU was created because countries that trade with other are less likely to go to war with one other. But when countries band together and agree not to fight , they constitute the beginnings of a military alliance against other countries not in that bloc. And a military alliance among capitalist countries is an aggressive alliance.

That was the significance of the EU’s so-called trade treaties, TTIP, CETA and so forth; they were, and remain in truth, embryonic military pacts, and were part of the EU and NATO’s encirclement of Russia. And modern wars can only happen if these alliances or blocs exist.

The First World War stemmed from the world being divided into the Triple Alliance and the Entente Cordiale (and they all traded with each other). The Second World War was, until the Nazi attack on the Soviet Union, fought between the anti-Comintern Axis and countries that belonged to the League of Nations, both examples of blocs.

In fact, the US (not the Europeans) had proposed an Organisation for European Economic Co-operation as early as 1948, and Ernest Bevin, British Foreign Secretary, proposed the establishment of the Western European Union, a sort of NATO-without-the-Americans, also in 1948.

West Germany was in origin an artificial creation of the USA, and that artificial state played the leading role in establishing the equally artificial putative state of the EU. So the argument, often run out, that the EU is a counterweight to the USA, is not based on any facts.

The facts show that the allegedly economic community of European states began as an offshoot of, and remains today central to, an American-led military organisation. The European Coal and Steel Community, said to be the embryo of the EU, was not established until 1951.

The head of the ECSC was Jean Monnet, often described as the father of the EU. Passionate about bringing the peoples of Europe together, Monnet had also been investigated in 1941 in America because of his pre-war business dealings with the Nazis. He went on to write the 1957 Treaty of Rome, which effectively established the EU’s forerunner organisation the European Community.

But the idea of a “united Europe” didn’t originate with Monnet. That other great European, Adolf Hitler, dreamt of a New Order straddling Europe with its own currency (the Reichsmark), its own army (the Wehrmacht) and its own police force (the Gestapo).

The US has always been in favour of dealing with the countries of Europe as a single entity, as a bloc, not as individual nations. America’s leading foreign policy advisor said at the end of the war, “the only thing wrong with Hitler’s New Order in Europe is that it was Hitler’s”.

The North Atlantic Treaty states that any attack upon any NATO member is considered an attack on all NATO members. The EU has supported every war that NATO has launched, whether it was against Iraq in 1991, Yugoslavia in 1992, Iraq again in 2003, Afghanistan, Libya in 2011, and Syria. These wars are called “military engagements”, undertaken by the “international community”, or sometimes, “coalition forces”. Or even, when they’re testing how stupid we really are, they are described as “humanitarian missions”, just to see if we’ll swallow that.

The closest NATO came to suggesting such a thing was the gossamer thin fabrication of Saddam’s phantom weapons of mass destruction, weapons on which in reality NATO has a near monopoly.

‘The US has always been in favour of dealing with the countries of Europe as a single entity.’

The rulers of these countries attacked by NATO/EU were demonised systematically. But we should ask, do we really think that Saddam was worse than the Saudi royal family, that firm ally of NATO? The Saudi Arabia that is now proven beyond reasonable doubt to have funded the fascists who killed nearly 3,000 people in the World Trade Center?

In Syria millions of women go to school, work in the professions and are able to vote. Is it a worse country than Saudi Arabia, where it is illegal for women to drive, and the stoning of women for adultery is commonplace?

And as if to prove the insanity and cowardice abroad in the world, three weeks ago Russia was voted off the UN Human Rights Committee, and Saudi Arabia elected, unanimously, for a second term. The reason the Russian leaders had to be thrown out is because they are independent of the USA, of NATO, of the EU.

But is it any of our business who runs other countries? Haven’t countries got the right to decide for themselves how and by whom they are governed? We think we have, so why doesn’t that apply to everyone? International law says everyone has that right. All of which begs the question, what is our national interest? Have these wars been in our interests? The cost of the war against Afghanistan alone was a massive £37 billion. That’s £2,000 for every British family. Plus nearly £2 billion for the war against Libya. Not to mention the irreplaceable human cost of over 600 British lives. If that is in the British national interest then there is no better argument for changing that national interest.

All of those wars were illegal. The United Nations is only empowered to intervene in wars between member states, not intervene in conflict within member states. All the countries attacked by NATO since the collapse of the Soviet Union, including Yugoslavia, were equally sovereign members of the UN; no more nor less than are Britain or the US, and all wars against them were illegal.

Independence is now a central political issue. It’s what the referendum was all about. We have stood up to our ruling class and its media. We can do the same with NATO.

Independence of mind is where it all begins; it is the beginning of the end of oppression. Question what you're told, come to your own conclusions, don't allow yourself to be force-fed propaganda, gossip or distorted views.

The military alliance of European countries within NATO came first but the EU has got its own separate military organisation as well. What do those within the British trade union movement so fond of extolling the nice sweet face of the EU make of the European Defence Agency for example, established in 2004 to coordinate military capabilities and create a European military equipment market?

And what about the EU’s own army, the Eurocorps and the European Rapid Reaction Force, set up even earlier, in 1999? That’s 60,000 soldiers who can be deployed within 60 days.

Do those who opposed leaving the EU also support the expansion and beefing up of NATO? You can’t have one without the other. If we’d voted to remain it would have been a green light for more reactionary policies, for even more money to be extracted from us and for war.

‘We should be very wary whenever the EU or NATO impose sanctions.’

Sometimes, when warmongering doesn’t lead directly to war, we might overlook the inherent danger. One of the most dangerous of recently averted wars was in the Ukraine. The EU didn't get its war, and NATO didn’t get its Black Sea naval base.

But the EU has not forgotten the Ukraine. A more convenient jumping off point for aggression against Russia does not exist for NATO. That’s true not just geographically and militarily, but politically, with the most militant Ukrainian separatists simultaneously the most pro-EU people in Europe – and the most neo-fascist of all.

Sanctions, economic and political, are weapons of war. All the EU/NATO wars have involved the use of sanctions against sovereign countries. So we should be very wary whenever NATO and the EU decide to impose sanctions against a country; it means they are preparing for war against them. And which country is subject to the most extreme sanctions of all? Russia. Nuclear-armed Russia.

So Britain leaving the EU must mean a weakening, hopefully fatal, of those bullying sanctions. This would start the process of pulling the rug out from under the Americans' attempts to get Europeans to fight Russia for them. It would be even better if we then do the obvious thing and begin trading properly with Russia, rather than applying sanctions against it which are harmful to us. We have struck out for peace in our rejection of the EU.

Now let us assert what we have yet to fully gain: our independence.

The inexorable road to World War One
Why Britain should leave NATO
British military aid floods into Ukraine
1916: Lenin on imperialism
Economic war on workers being used to fund a military war