Training: employers still the ghost at the feast 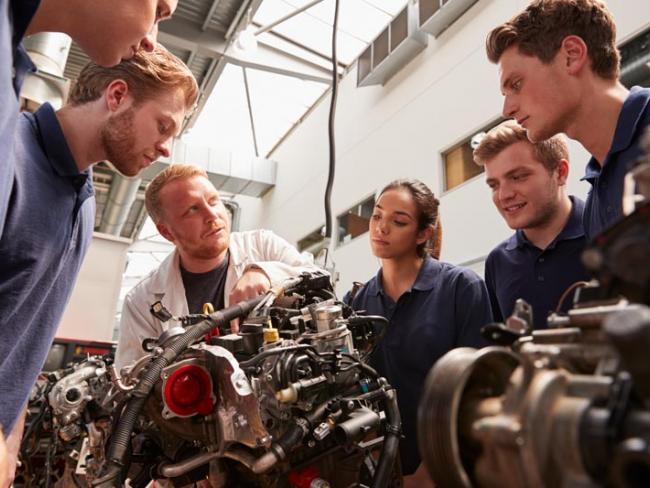 Business and governments want skilled workers, but not to have to train them or even finance their training. Instead, they want to go on importing labour from abroad – leaving young British workers bereft of opportunities…

The Confederation of British Industry’s reaction to the latest Budget is typical of the employer stance on training the workforce in Britain. “It’s a missed opportunity to reform the apprenticeship levy, into a broader ‘skills and training’ levy that encourages firms to invest in a wider range of training or methods” said Matthew Percival, the CBI’s director of people and skills.

And there we have it. With some honourable exceptions, employers in Britain have for decades had to be either lured (Percival’s “encouraged”) or dragged kicking and screaming before they will provide training whether that be for the workers they already employ or apprenticeships for young people, particularly where that leads to actual jobs.

Also in March, a Parliamentary Committee launched yet another inquiry into how to address the paucity of adult skills training in Britain. The only certainty is that whatever the inquiry recommends, the employers will again be “the ghost at the feast” as skills expert and Oxford University professor Ewart Keep describes them.

In surveys since the 1950s, the excuse given is the fear of “poaching” by other companies. But that is spurious, as  research shows that employers can coordinate to solve the commitment problem to training and reduce free-riding.

Other countries have perfectly serviceable training systems where employers manage to collaborate with government and unions to provide training. Rather than train British workers, employers here – in the private and public sectors alike – have preferred to have other countries do the training, then import the skilled labour.

Since the introduction of the ill-fated Apprenticeship Levy in 2017, apprenticeship started with large employers — those with 250 or more employees — have fallen by 9 per cent. Britain’s small and medium-sized businesses (SMEs) are the worst culprits. Training is not in their business plans or at best it is not significant, according to the Federation of Small Businesses.

Apprenticeship starts have fallen by 34 per cent in small businesses and 42 per cent in medium-sized enterprises. SMEs are a fundamental part of the British economy – 61 per cent – so these figures are deeply troubling.

Research published in February 2020 by the City & Guilds training group found that 34 per cent of respondents have either not received workplace training in the last five years or have never had any such training – equating to 17.8 million people with outdated skills. Tellingly, the City & Guilds report, Missing Millions, is subtitled Considering the untapped potential of millions of working age people in the UK.

Employers in Britain have been wriggling out of training workers since the post-war period.

It has been nothing to do with whether the country is prosperous or going through austerity, whether there is high or low employment.

It is to do with an employer mindset which, for most of the last 40 years, has been supported and encouraged by their acolytes in government.

The exception was between 1964 and 1982 when employers were forced by the forward-thinking Industrial Training Act into paying a training levy and taking part in tripartite Industrial Training Boards (ITBs) with government and trade unions. Introduced by a Conservative government, and implemented by the Labour government that followed, the Act had bipartisan support.

Leading up to the Act, complaints about employers’ failure to train had been similar to today, as evidenced by the intended function of the ITBs which was “to enable decisions on the scale of training to be better related to economic needs and technological developments”; to improve the overall quality of industrial training and to establish minimum standards; and to spread the cost more fairly.

What made the government take action was the opinion of a feisty post-war public, increasingly vocal in condemning laissez faire in the labour market and its consequences: a decline in training and a shortage of skilled labour.

But the Act did not last. Employers, having failed in their onslaught against the ITBs in 1972, finally got their way a decade later. Following the election of the doyenne of the free market, Margaret Thatcher, in 1979 most of the ITBs, along with the training levy, were abolished. The voluntaristic approach to training came into its own once again.

Between 1981 and 2015 there were 61 Secretaries of State with responsibility for skills policy, each with their own agenda for change, and not one of them with the backbone to stand up to employers and their dereliction of duty towards training.

The rot worsened during the Blair years (1997 to 2010) with the promotion of university education over training, the creation of a reserve army of workers from the EU, and the promulgation of the EU-inspired notion of “lifelong learning”.

This sweet-sounding idea was forensically taken apart by Professor Frank Coffield in 1999. He showed how it condemns workers to be individually responsible for their own training, re-training and then re-training again, all at their own expense.

Tony Blair and his followers tried to ensure that for decades to come the need for employers to train workers in Britain would be obviated by the easy import of labour, skilled as well as unskilled.

As the article on migration in this issue (see page 6) shows, with Britain out of the EU employers are now looking elsewhere for skilled labour, no matter the damage to other countries – and as ever aided and abetted by government. Anything rather than train workers in Britain.

In sharp contrast to this, employers elsewhere can and do train their workforce. The dual vocational training system in Germany (see Box), Austria, Switzerland, Luxembourg and Denmark would be perfectly possible in Britain, with a set-up not dissimilar in principle to the Industrial Training Boards of the 1960s and 1970s.

Self-evidently the structures in place to support training in different countries have their roots in particular industrial and political histories. But in countries where coordinated vocational training is in place, research shows consistently that there are two key factors at work.

The first is that societies there expect employers to engage in training, which includes a commitment to funding. Companies which do not train know they risk losing public approval. The second is that vocational training is highly valued. It is the public, workers, in those countries, who ultimately call the shots.

So employers do pay a levy. And industry by industry, they do participate in the equivalent of the tripartite Industrial Training Boards with government and unions.

After many decades you’d have to be deaf not to hear the message: employers in Britain won’t train workers voluntarily. So we have to make governments more afraid of us than they are of the employers, as when the Industrial Training Boards were established. But at the same time we have to tear ourselves away from a near-exclusive reliance on the overblown and very expensive status of a university degree.

Otherwise we will only get the skills we deserve. And the workers of Britain will pay the price.

• Related article: There is another way…