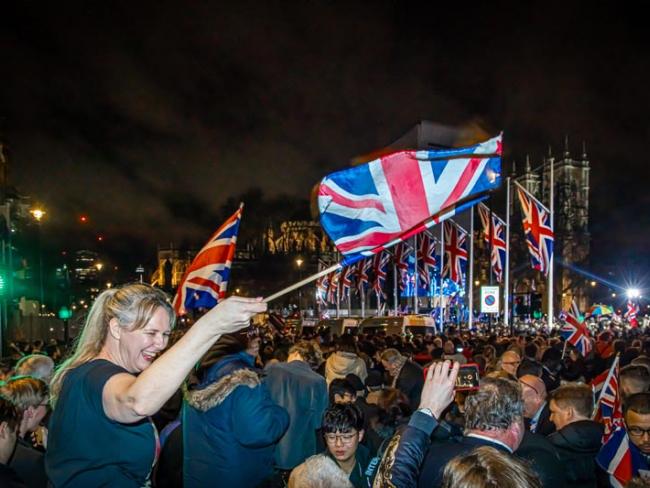 The joy of leaving: Parliament Square, 31 January. Now we have to make sure the job is done properly. Photo Alexey Federenko/shutterstock.com.

We want to get Brexit completed. But we’ve just had a 42-month tutorial in why we should not leave things to the establishment. So what do we need to be vigilant about and prepared for?

We want to get Brexit completed. We want housing, transport that works, and politicians who don’t get in the way. But we’ve just had a 42-month tutorial in why we should not leave things to the establishment – the politicians, the judges and the state they run.

So what do we need to be vigilant about and prepared for?

At the recent CPBML event on Keeping Brexit on Track in January, the importance of raising awareness in relation to both questions was highlighted. As one participant stressed, we need to “call out anything that is going wrong. Secrecy, the way the EU always works, is our enemy”.

Leaving the EU was a prerequisite for British independence, but achieving that goal is a process driven by the people rather than politicians. We need to take our lead from those in the front line in the fishing industry (see Box, opposite).

Control of our laws

More than any recent governments, Boris Johnson’s knows that it will be judged by what it can deliver to fulfil its promises. It knows that it has only been “lent” support.

So one starting point for workers is monitoring delivery of those promises. We know that the Conservative manifesto said they would “end the role of the European Court of Justice.” But as Lawyers for Britain continues to note, the Withdrawal Agreement, despite the removal of the original Northern Ireland backstop Protocol, still contains many damaging provisions left over from Theresa May’s negotiations.

Lawyers for Britain points out that the agreement contains provisions “which provide for long-term binding ECJ jurisdiction over the UK.” So honouring the manifesto claim of ending the role of the ECJ “remains unfinished business for the next stage of the negotiations”.

The Johnson government has made a start by formally and legally ruling out any extension to the transition period. Ministers have also said they will not be bound by those aspects of the Political Declaration which would allow ECJ supremacy over us and bind us into the EU’s so-called “level playing field”. Regulatory alignment is another term for it. The UK’s chief Brexit negotiator David Frost has now rejected the whole concept, warning that EU oversight of whether British laws are rigorous enough would contravene “the fundamentals of what it means to be an independent country.”

So the transition period will see an almighty tug of war about the role of the ECJ. There will be no shortage of EU supporters in Britain such as the Grassroots for Europe campaign (whose January 2020 conference was attended by over 400 people and graced with a recorded message from Gina Miller) willing to fund and front all manner of legal challenges.

Control of our borders

When the people voted to leave in 2016, it was among other things a clear instruction to end the free movement of labour from the EU. Most people knew that uncontrolled migration was a benefit to employers and an important mechanism for suppressing wages.

The current government commitment is to treat migrants from the EU and outside the EU the same. The outrage is that the discrimination in favour of the EU continued for so long.

But there the good news ends – because the government has also committed itself to an “Australian style” points system and to importing the “brightest and the best”. We have seen a version of this policy since the inception of the NHS, where much poorer countries than Britain spend their national wealth on training doctors and nurses who are then attracted to the NHS via recruitment campaigns.

It was refreshing to hear Simon Stevens, Head of NHS England, tell a conference in 2019 that the NHS “must stop denuding low income countries of health professionals they need”. At the same conference, leading cancer surgeon Professor J. Meirion Thomas said “ …there is a moral issue here. We are poaching doctors from abroad and have done for decades.”

Instead of extending the policy of poaching skilled workers to other sectors of the economy, we need to be revitalising our own neglected education system.

Someone needs to say it bluntly: if employers in Britain are free to import the “brightest and the best”, many will take that as a green light to cut their training budgets. We have our own brightest and best here in Britain, waiting for a government that will invest in training them.

Unsurprisingly, the training schemes that seem to deliver the right level of skill are those where the employer takes responsibility, and that responsibility can be country-wide. For example, the New Holland agricultural machinery company trains many individuals at its base in Essex but has longstanding links with, for example, courses at Reaseheath College in Cheshire and Scotland’s Rural College (SRUC), based in Edinburgh.

More recently New Holland has been involved along with other employers, including JCB, in starting up one of the most sophisticated technical education centres of its type in Britain – the £8 million Centre for Advanced Engineering and

Agri-Technology at Reaseheath College, officially opened on 14 February. The aim is to deliver next generation skills in precision engineering, precision farming, service engineering and diagnostic testing – but this sort of thinking is rare in employers here.

The big opportunity in leaving the EU is the ability to have a plan for British industrial development. Our biggest challenge as workers is how to force joined-up thinking on this government and the employers.

Workers know that everything starts with production. We know ours is a productive country which can afford decent health and social care for example. We must be an industrial nation to survive. To do that we have to have national control of trade.

Or do we know that? At one time our trade unions would be shouting this from the rooftops. Now they think that free trade deals are a good thing, oblivious that the benefits accrue to a tiny number of very wealthy employers.

In a survey last year carried out by BMG research, participants were asked to respond to the statement “Without an agreed trade deal, countries cannot trade with one another.” No fewer than 62 per cent of those questioned either answered incorrectly or said they didn’t know. The fact is, companies don’t need trade deals, free or otherwise, to trade around the world.

The EU still wants to resurrect the TTIP agreement with the US, on hold ever since Donald Trump was elected as US president. That deal would have handed control of trade to an unaccountable and self-perpetuating group of international lawyers.

We must be alert to any attempt by the government to negotiate its own TTIP with the US, flooding Britain with cheap and dubious US foodstuffs.

In 2017 the May government did produce a document called an Industrial Strategy which despite its limitations at least sought to be a kind of overview planning document. It seems to have disappeared.

The current government website – updated in September 2019 – now has only a link to something called the Grand Challenges. The text contains the words “industrial strategy” but makes no attempt to provide an overview of industry let alone any comprehensive plan of what we need to be an independent country.

The website lists the “four grand challenges” as artificial intelligence and data; an ageing society, clean growth and the future of mobility – all serious topics, but the pragmatic questions such as how we meet Britain’s energy needs in the next five years don’t get much of a look-in.

So on the one hand a lack of industrial strategy and on the other hand a recently launched government “trade consultation”. With this the government wants to cut import tariffs generally, eliminating all tariffs of 2.5 per cent or lower, rounding down all tariffs to the nearest 5 or 10 per cent, and “removing tariffs where the UK has zero or limited domestic production”, which it says “could help to lower prices to consumers”. No suggestion of any protection of our existing industry at all.

In contrast a trawl of Boris Johnson’s speeches reveals a number of commitments which could be protective of British industry. By January 2021 he will introduce;

• a new state aid regime so government can intervene to protect jobs when an industry is in trouble ( such as supporting Flybe);

• a changed public procurement policy, to promote the local economy;

So, in summary, a messy and uncertain future for British industry. We need an extension to that election slogan: to “Get Brexit done” we need to add “and Britain rebuilt”. There can’t be a “Buy British rule” unless we make things in Britain. The recent coronavirus crisis is a salutary reminder about global supply chains and the importance of self-sufficiency.

Control of our waters

Maybe it is years of watching the weather and a preparedness to cope with storms, but the fishing industry is currently providing an object lesson to the nation of how to be vigilant in the transition period.

The Johnson government can be in no doubt that with fishing, its every move is being watched and reported upon. Leading the charge is the organisation Fishing for Leave. It points out that Brexit is an opportunity for Britain to become a sustainable and successful fishing nation and provides “a golden opportunity to regain 70% of the UK’s fisheries resources and rejuvenate a multi-billion-pound industry for the nation”.

On 6 February Fishing for Leave welcomed the news that the UK position on a fisheries agreement with the EU is to be similar to Norway’s. The organisation immediately posted its key demands to prevent backtracking, concluding with both a good luck message and warning for the Prime Minister.

There needs to be the same directness and urgency across the country on all of the threats of the transition period.