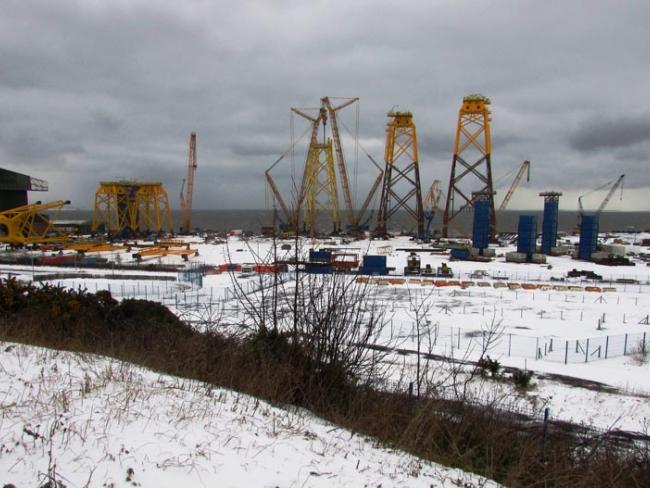 The SNP administration in Edinburgh seems to have lost its grip on reality. What other conclusion can be drawn from Nicola Sturgeon’s instruction that the EU flag, alongside the Scottish saltire, is to be flown  at all government buildings? The union flag is allowed only once a year – on Remembrance Sunday. Its internecine battles may have led the SNP administration to flail about seeking distractions, and this one certainly grabbed the headlines.

The symbolism is clear: the SNP and its separatist supporters are determined to pretend that Scotland has not left the European Union along with the rest of Britain. Just when workers have a golden opportunity to strive for unity and a truly independent Britain, the SNP wants to split and drag a major portion of our island back to being a dependency of Brussels.

This has been a serious and long-term plan. A large team of civil servants were hard at work throughout 2020 to finalise the UK Withdrawal from the European Union (Continuity) (Scotland) Bill 2021 . It was finally adopted by Holyrood and became law on 31 January this year. Scotland is the only devolved administration to enact this type of legislation, which gives Scottish ministers power to keep its laws similar to EU law.

This runs counter to British government efforts to pursue an independent course for the whole country. The new Scottish law actually allows for a new organisation to be set up to ensure that, for example, EU governance would continue on environmental policy and that compliance be enforced.

Britain has the benefits of a common language, an established single currency, a central bank, the ability to furlough and an internal market that gives Scotland over five times as much trade with Britain than with the EU. This is the reality that the civil service should be told to analyse and develop instead of being instructed to engage with fantasy.

If this is happening with impunity under the current system of devolution, just think what splitting activities would arise under proposals for more powers for the Scottish parliament and so-called “progressive federalism”. Even now, the SNP administration maintains offices in Brussels costing millions, and separate facilities in most European countries. Much of this activity is facilitated by the UK civil service.

With its continuing worship of all things EU, the SNP administration is in no fit state to contribute to the industrial vision needed at the forthcoming UN Climate Change Conference (COP 26) scheduled for Glasgow in November.

Such a vision requires the government of a united Britain to muster an independent, integrated, detailed energy strategy and present it clearly. That can’t be done while a tinpot administration in one corner of the country is acting as a block on progress. Nor when it is wilfully allowing Scottish companies to be destroyed, as it is in shipbuilding.

The SNP’s handling of the procurement process for new ships was described in December by Holyrood’s own rural affairs committee as “ a catastrophic failure ”.

For years that failure was blamed on EU state aid rules. Yet it is as if Scotland were still in the EU, with Holyrood’s fear of offending Brussels uppermost – allowing the last privately owned shipbuilding company in Scotland, Ferguson Marine, to go under. BAE Systems continues to fulfil UK naval contracts, but the great shipbuilding rivers of the past remain silent.

And this despite the need for new tonnage, particularly of small and medium-sized ships. These are lacking in areas such as supply vessels, fisheries protection and ferry services to the many western isles. The dearth of smaller cruise ships, for example, brought to an end the archaeology- and history-based cruises of the National Trust for Scotland. Post-Covid such an industry could be revived if ships were commissioned.

The report from the rural affairs committee concluded: “The Scottish Government’s approach to the procurement and construction of new vessels has been short-term, piecemeal and lacking in strategic direction.”

Former MP Brian Wilson, who used to campaign for remaining in the EU, is now critical of hiding behind EU rules. In an article he wrote in February for The Herald newspaper headlined “Shipbuilding: There is a way to create a new golden age on the Clyde. Let’s grasp the opportunity,” he wrote, “It is at least possible that Brexit creates that opening.

“For decades, membership of the EU was blamed for our inability to use public procurement as a means of supporting our own basic industries – and none more so than shipbuilding…From my own experience, I think the EU was more of an excuse than a reason. In the CalMac case, there was a long-term civil service agenda in Edinburgh to fragment and privatise.”

Wilson expressed the fear that of the nearly £1 billion worth of shipbuilding orders on the books most would be fulfilled abroad.

Now, out of the EU, it’s not only shipbuilding that can be revitalised. Along with it would come the need for steel and new engineering technologies.

Further evidence of the Scottish administration’s destructive approach came with the collapse of Burntisland Fabrications (BiFab – see Workers , January/February 2021 ). Nearly £40 million of taxpayers’ money was invested in it, but the yards at Methil in Fife and Arnish on the Isle of Lewis, which were linked to BiFab and are dedicated to the growing renewables industry, are all that remains of the oil and gas boom from previous decades.

Now there is a new operator, InfraStrata. On 12 February this year it bought the sites for just £850,000. Previous acquisitions by this company have included Harland & Wolff in Belfast (taking it out of administration in 2019) and Appledore shipyard in Devon, which had closed in 2018. Its plans for wind energy construction seem to be stuck at the aspirational stage, and are not inspiring confidence in the workforce.

In a joint statement , the trade unions representing workers in the industry, GMB and Unite, welcomed the development but emphasised that “the story to date has been one of government failure” and pressed for guarantees that the use of local supply chains would be written into the contracts.

Scottish union secretaries Pat Rafferty (Unite) and Gary Smith (GMB) pointed out that while the facilities had remained closed, “thousands of jobs and billions of pounds have been outsourced around the world.” InfraStrata is negotiating a 12-year lease for the BiFab sites.

On the railways, the SNP administration remains loyal to the Dutch state-owned rail company that owns Abellio, holder of the ScotRail franchise. The rail workers’ trade union RMT objected  that the administration was “set to reward failure and give Abellio a free ride to continue operating the ScotRail franchise from 2022”. And this despite Abellio’s “well documented poor performance.”

RMT general secretary Mick Cash pointed out on 12 February that the “Scottish government is once again showing its bias in favour of a privatised railway…and has also refused to publish its response to the UK Government’s Williams Review of Rail, choosing instead to hide behind a veil of secrecy.”

It is clear the SNP has taken its eye off any industrial responsibilities. No wonder it feels the need for distracting headlines.