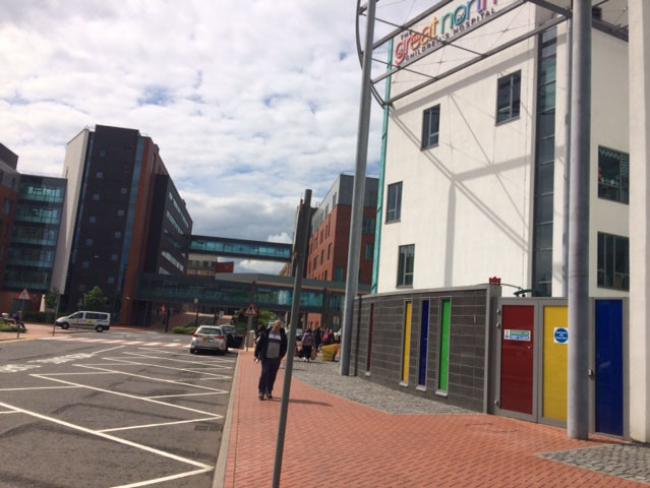 Royal Victoria Infirmary, Newcastle. TTIP would make privatisations in the NHS irreversible and force the NHS to contract out services or spin them off. Photo Workers.

People who know the NHS in Newcastle won’t have been surprised to learn that the Newcastle NHS Foundation Trust has been classed as “Outstanding” for its levels of care and performance, following its inspection in January by the Care Quality Commission.

The Trust’s Board awarded workers at all levels an extra day’s holiday by the Trust Board in recognition of this, the first “Outstanding” award to a Teaching Trust.

But the former trade union official who organised and led a key strike at Newcastle’s Royal Victoria Infirmary (RVI) in the 1980s and who brokered an attempted link-up with Cuban health institutions has contacted CPBML News to issue a warning to both the staff and the public and called on them to vote to Leave the EU in the referendum on 23 June.

Now retired, at the time of strike Phil Lenton was Divisional Organiser with public services union NUPE – since incorporated into Unison. He warns that this magnificent work will be at risk if Britain remains in the EU. His reason: because of the Transatlantic Trade and Investment Partnership (TTIP), which the EU and US hope to agree before the end of the year.

Lenton pointed to the Roundtable of Industrialists, the largest corporate lobby in the EU. For many years, this lobby has dictated the social and economic policy tune to the un-elected European Central Bank and EU Commissioners. They are the leading lights in the anti-public sector and austerity agenda.

Within the corporate lobbies, you might expect the oil, military or finance companies to be dominant. This is not the case. The private health care organisations are the biggest and most influential lobbyists in both the EU and the US. They want to get their hands on Britain’s NHS – and their mechanism is TTIP.

The health workers at Newcastle NHS Foundation Trust have a proud history of fighting to maintain the quality of the service they provide. In 1985, for example, the domestic staff at the RVI went on strike against the Thatcher government’s decision to put so-called “ancillary services” out to tender.

That strike was physically supported by many other groups of staff. Everyone involved knew that this struggle was not about personal gain, but was about maintaining the cleanliness of the hospital, from the wards to the operating theatre.

The contractors, meanwhile, saw the RVI as the “jewel in the crown” of the NHS in the North East. So the domestic staff started their campaign with a three-day strike, one day for each of the contractors which were bidding for their jobs.

The companies were Mediclean (now part of the Danish group ISS), Initial Cleaning Services and Office Cleaning Services. On the third day of the strike, their union NUPE called for a mass picket at the RVI gates. They were taken by surprise by the numbers that arrived to show their solidarity.

Some 5,000 local workers, including engineers, shipyard workers, miners and local authority staff arrived to show their support. The picket grew so large that local union officials had to turn it into a makeshift march through the city centre.

They won their struggle, which set the pace for other groups of NHS workers across the North East who were similarly threatened with tendering. After two years of successful struggle, the private contractors’ association complained bitterly to both the Regional Health Authority and the government that they were not winning any contracts in the North East due to “unfair trade union actions”.

We now know what happened where private contractors were brought in and cleaning standards dropped. Hospital-based “superbug” antibiotic-resistant infections such as MRSA and E. coli increased dramatically across the country in the following decades.

In 1997, management at the RVI expressed an interest in developing a partnership with Cuban medical institutions with a view to learning how to improve their own medical outcomes. This proposed partnership was being brokered by the same trade union officials who had led the strike a decade earlier, and the plan was only shelved when hospitals in Newcastle were merged, leading to a change of management.

But the very idea does indicate the commitment of both management and workers to the quality of the NHS in Newcastle. The more recent junior doctors’ strike reflected this commitment, with all grades of staff in the Trust understanding that the proposed new contract would lead to a much thinner level of cover, reducing the quality of service.

Newcastle NHS Foundation Trust, which includes the Great North Children’s Hospital within the RVI, shares a fine medical school with the University of Newcastle. But that’s not the only thing they share. The International Centre for Life is another partnership between the Trust and the University and incorporates the Institute of Genetic Medicine, Newcastle Fertility Centre and the Northern Genetics Service.

The International Centre for Life also houses the Biomedicine West Wing (a shared laboratory and incubator for new and established bio tech companies) in its building. In addition, it contains OJbio, a joint venture between Orla Protein Technology and the Japan Radio Company, providing a diagnostic platform that allows rapid measurement of disease markers as well as electronic storage and wireless transmission of results – ideal for remote use and near-patient testing.

Then there is QuantuMDx, a medical devices company developing hand-held and portable diagnostic devices. Another shared entity is the Campus For Ageing and Vitality, said to be a world leader in developing healthy ageing and living.

Newcastle NHS Foundation’s success, ironically, makes it a prime target, another “jewel in the crown” as it was three decades ago. TTIP would guarantee US and EU private health care corporations the right to bid for every element of the NHS, whether the NHS or the British government likes it or not.

The former official went on to say that the only way to stop TTIP is to leave the EU.