What future for Britain’s railways? 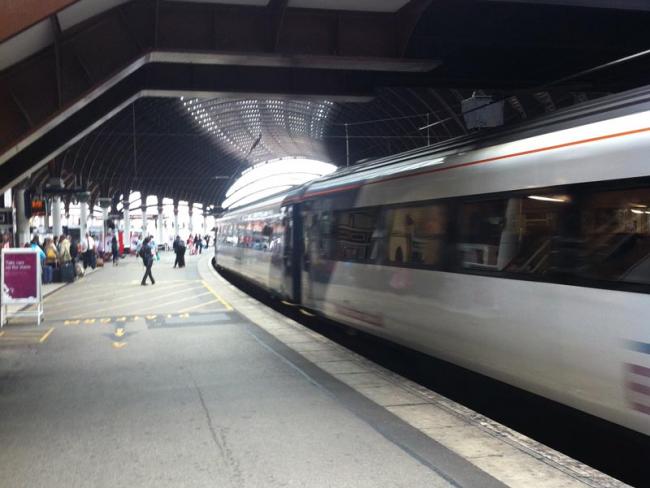 With nationalisation the only sensible option for rail, the government is moving swiftly to avoid doing it. Instead, it is looking to turn the industry upside down, with huge implications for jobs, pay, conditions and services…

This article was edited on 10 February 2021 to remove an incorrect assertion that Margaret Thatcher was in favour of nationalising the railways. The responsibility for rail privatisation is John Major's.

It now seems certain that Britain’s railways and the workers employed to run them face the biggest upheaval in the industry since the railways were privatised in the 1990s. Not only is the structure of the industry going to change, but the staff and their unions are facing redundancies and a squeeze on pay, conditions and pensions.

The system of franchising rail passenger services, in place since 1996, has been effectively in intensive care for the last few years. A number of franchises were already thought to be in serious financial difficulties at the beginning of 2020.

Subsequently, two went bust: Northern, and the Virgin-Stagecoach East Coast franchise. Both had to be nationalised, and there is no sign yet of any moves by government to return them to the private sector.

And then the coup de grâce to franchising was delivered by Covid-19, which resulted in a significant reduction in both commuter and business rail travel. Any return to what, pre-lockdown, were record passenger levels is now looking years away.

The government moved to prevent a complete failure of the franchises which were additionally impacted by Covid-19 by putting in place emergency contracts for the existing franchise holders. This enabled them to remain solvent and continue to operate train services.

The measure was followed on 21 September by the government making the long expected announcement that it had ended the franchising of rail passenger services, and would be entering into ‘short term’ management contracts with the operators. Those private companies breathed a huge sigh of relief having been released from their financial franchise obligations, with the new contracts guaranteeing their profits into the future.

Such is the turnaround in the fortunes of private rail companies that Serco, never slow to spot an opportunity to provide rip-off public services, is keen to expand its rail interests now that profits are much more certain.

With the franchising system collapsing under the weight of its own contradictions, just over two years ago, the government was forced to appoint businessman Keith Williams to consider and report on what a post-franchise rail industry should look like.

While charged with looking at a successor arrangement to franchising, Williams was also told to find a solution to the lack of what has been termed “a single controlling mind” in the industry. It was this lack that was subsequently identified as the primary cause of the massive train service failures associated with a major timetable change in 2018.

Interestingly, the Williams report has so far failed to see the light of day, its delayed publication early in 2020 being blamed on Covid-19. Indeed, assumptions that Williams may have felt safe to make before the pandemic are clearly not safe now, and many assumed that Williams would be told to go back to the drawing board.

But despite the inevitable focus of government attention being on managing the pandemic, the good news is that the failure of the report to appear hasn’t resulted in a hiatus in planning or implementing change in the railway industry.

Trade unions and campaign groups have argued that the only way forward given the crisis is for the government to nationalise the remaining rail franchises as they were forced to do with Northern and East Coast, returning them to public ownership and control.

There were credible rumours that the government was considering handing over the rail passenger operations to state-owned Network Rail as a stopgap before more permanent arrangements could be put in place once the future of the railways post-Covid was more certain.

But it should be remembered that at the outbreak of the Second World War in 1939, the Tory government then in power declined to nationalise the railways in the face of a serious national crisis, instead keeping the private operators in place throughout the war but under government direction. The modern Tory government, keen as it is to give the likes of Serco lucrative contracts, is perhaps even less likely to want to nationalise in such circumstances.

It is also pretty clear that the terms of reference that Williams was given by the government did not include any serious consideration of a return to a unified national railway, let alone one in public ownership.

Without waiting for Williams to write up a new version of his report, the government has moved quickly to avoid any more passenger operations having to be taken over by the state. It is currently negotiating with the private rail operators to put management contracts in place which will continue until post-Covid passenger recovery allows concession contracts to be rolled out.

The key change is that now the government rather than the operators will take the revenue risk.

Precisely when and at what point these lucrative contracts will be put out to competition rather than just being awarded to the incumbent operator is as yet unclear.

The explanation for the government’s keenness for early changes is its apparent desire to make timetable revisions that remove many of the competing services that have been created under franchising, along with the allowed open access services. These are seen as wasting capacity on lines where it is at a premium, and ultimately adding costs to the public purse.

One example is the East Coast Main Line where four franchise operators compete with two open access companies for the same passengers, with another planning to join the fray.

Competition was one of the key reasons for privatising the railways in the first place, with John Major promising that it would mean better train services. But the present government seems to have now accepted that head-to-head competition of the sort existing on the East Coast Main Line is actually inefficient and increases costs, something which the rail unions have argued for a very long time.

The rail unions have also continued to argue that only a return to a unified and nationalised railway will ensure that there is an effective “single controlling mind”. The government seems more keen on a “single guiding mind”, a subtle but important difference in approach. The government wants to see the removal of layers of cost and complexity which “the industry can no longer afford” and there is a consensus with the private operators that a “single guiding mind” will be required to oversee the cuts to come.

And therein lies the threat and the major challenge faced by rail staff and their trade unions. Things have changed. No longer is the railway a boom industry, continually increasing in passengers and expanding its capacity. The leverage and power that the unions had before Covid-19 has diminished considerably. And the government has not been slow to realise that.

Time for a reckoning?

An informed source has told Rail Business UK, an industry journal, that “industrial relations will be the big issue; I think there is a view that everybody in the rail industry, including the management, is overpaid and it is time for reckoning. That will happen in the next few months, and I think it could get quite bloody.”

So next year, the unions will be faced with a government which has a large majority, four more years in power, and an appetite to take them on. With far fewer people relying on trains to get to work or to conduct their business, the government view is likely to be that now might be the best time to take on the unions and if necessary endure a prolonged period of industrial unrest.

The “single guiding mind” that is the government will probably make it a condition of the new contracts for the private operators to make the changes that it desires, including facing down union opposition if necessary.

Pensions is one area that the government and the operators are keen to attack. Don’t forget that Stagecoach and Virgin were disqualified from bidding for franchises recently because they were not willing to accept the liabilities arising from the continuation of the defined benefit (often erroneously referred to as “final salary”) Railways Pension Scheme inherited from British Rail.

With discussions about the future of staff pensions in passenger franchises in limbo for several years, this is an outstanding issue for government to settle. And if the indications made by Prime Minister Johnson about similar pensions in Transport for London are anything to go by, rail staff are in for a serious battle over theirs. Johnson’s comments about free staff travel in London also mean that national rail staff may have to vigorously defend their travel concessions.

The announcement by the Labour administration in Wales that it is to nationalise the rail services that it is responsible for providing seems to run counter to all of this.

The former Wales and Borders franchise, run by Arriva until two years ago, was handed over by the Department for Transport to a Wales “government” that wanted to run its passenger services directly.

‘Why has the government now allowed Wales to nationalise the railways there?’

But the May government refused to allow this, and instead put the Wales and Borders franchise out to tender, with French state railway subsidiary Keolis and Spanish infrastructure company Amey jointly winning the contract. Also part of the deal was that most Cardiff commuter lines – around 10 per cent of Wales’s rail network – would be transferred to the franchise holders.

The massive drop in passengers and therefore revenue meant that the only way Keolis and Amey could continue was for the Wales administration to hand over large sums of subsidy. The more attractive option was to run it itself, as it wanted to originally.

So why has the Johnson government now allowed Wales to nationalise the railways there? Cynics are suggesting it may be a ploy to allow Johnson to starve Wales of cash and then do what he has done in London, blame a Labour administration for “getting in a mess” in running transport.

It remains to be seen whether Welsh nationalisation will turn out to be as attractive as it first appears. Rail unions will need to be prepared to act to defend their members’ jobs, as well as the rail services of Wales.