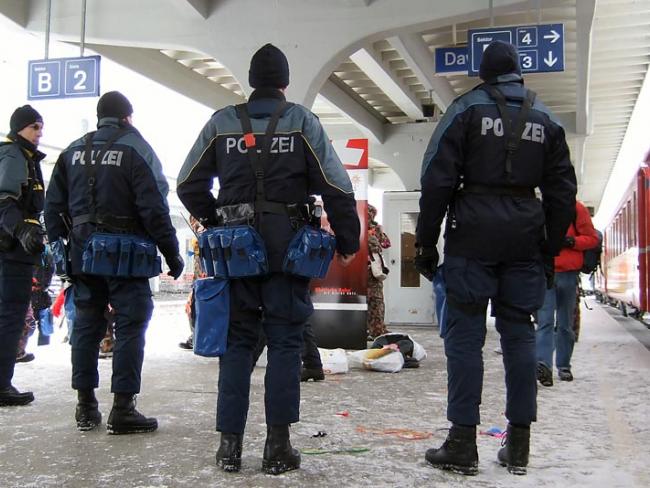 Davos, a village in Switzerland, has built itself a reputation as the place globalists come each January to hatch new plans. And at the World Economic Forum, that means above all taming independent nation states…

• This article was written and sent to press before the World Economic Forum announced that the Davos meeting was being moved to “early summer”.

This January – as every January for the past five decades – the globalist elite will be gathering in a small Swiss resort to consider how to move their agenda forward. The meeting is known as the World Economic Forum. The working class is not invited.

We have probably heard more of this organisation in the past two years than in the previous fifty – it was founded in 1971 by Klaus Schwab. It meets annually in Davos, Switzerland. It can be described as the executive of global capital and is funded by around a thousand multinational corporations, including the world’s four biggest private equity groups.

It is not a secret organisation and can be searched for online – but you will not find much detail of its internal workings, for all its advocacy of transparency. In many respects it presents itself as a benign and rather fluffy, cuddly entity – a common cover these days for those who seek total domination of all earthly things. It is answerable only to its paymasters, the global corporations.

The World Economic Forum’s mission is to bring together people of “influence” to “shape global, regional and industry agendas”. So far it has been remarkably successful, even if capitalism rather than the peoples of the world has been the beneficiary.

And capitalism does need all the help it can get. This century has been particularly problematic.

In 2007 the financial markets collapsed, an event passed off as the outcome of sub-prime lending. But this only masked the reality: the capitalist mode of production had reached the point that its very survival, in current form, was in question.

Crises had come and (apparently) gone and economies had recovered in the past. Surely there had to be some solution. The response, around the capitalist world, was to introduce quantitative easing, otherwise known as printing money.

‘The globalist elite will be gathering. The working class is not invited…’

It was meant to be short term, but it goes on, and on. To date, it has seen $25 trillion pumped into the global financial system, all created through government debt. Sooner or later that debt is going to have to be repaid, or refinanced. And nobody has a clue how it can be done.

Economics cannot be divorced from politics. In the era of monopoly capitalism it has developed mechanisms to organise the operation of capitalism on a world scale. This has been facilitated through various bodies, all neatly and openly presented as benign, only being interested in humankind’s development – “for the good of all”.

Even though recent history shows how false this image is, it still persists in the minds of swathes of people around the world as “they are doing their best for us”. The World Economic Forum’s contribution to this deception is summed up in its philosophy of the Great Reset.

The idea is that shareholder capitalism (capitalism, in other words) must give way to what it calls stakeholder capitalism. The World Economic Forum defines this as “a form of capitalism in which companies seek long-term value creation by taking into account the needs of all their stakeholders, and society at large”.

The reality is that taking into account the needs of stakeholders and society at large means only one thing: taking power away from the governments of nation states ­– which for all their faults are all that stands between the working people of the world and unfettered global capital.

Time was when nation states were developing and monopolies were yet to truly establish themselves, the role of the state was to operate as the executive for national capitalism. Global capital is now trying to assign a far more subservient role to nation states.

Their job, say the globalists, is to merge with other nation states into supranational blocs such as the European Union. Or failing that, to bind nations with a complex net of free trade agreements which allow global capital to go wherever it wishes, free (so they hope) from the spectre of working class challenge and overthrow.

All this was set out explicitly in the World Economic Forum’s forerunner of the Great Reset, entitled with equal humility the Global Redesign Initiative (yes, really). The 600 pages of its 2010 report don’t make for light reading. Even its executive summary is jargon-ridden. But behind the obscurantist language is a clear message: farewell to the nation state.

“When states were the overwhelmingly dominant actors on the world stage and major policy decisions were commonly decided by a limited number of them, progress on international cooperation tended to be measured by the establishment of new intergovernmental legal frameworks and institutions,” its authors proclaim.

That approach is clearly not good enough. They continue: “…efforts today to strengthen international cooperation will increasingly need to have a wider focus…”. That means new international law and institutions. And, crucially, “integrating non-governmental expertise into the formulation of policy frameworks, be they formal (legal) or informal (voluntary or public-private); and integrating non-governmental resources into policy implementation”.

And all this is required because the emergence of new, powerful nation states around the world means that globalists can no longer rely on the old “limited number” of nation states to do their bidding…“because a larger cast of politically influential states makes it harder to attain multilateral agreement on universal frameworks”.

Hence the attempt to destroy nation states from within. Many of today’s nation states have people who have been trained to help deliver the vision of a global government on behalf of global capitalism. And a key training ground is, once again, the World Economic Forum (see Box).

As the private jets head for Switzerland to unload the 100+ billionaires and dozens of heads of government to gather in Davos, workers in Britain and elsewhere increasingly understand that nothing good will come from it. They want us to think we can have a much fairer society if we only listen and accept their “build back better” solution. But nothing discussed at Davos will change the ownership and control of capital by the global corporations and private equity companies. On the contrary.

The essence of capitalism is exploitation of workers’ labour power – nowhere in the World Economic Forum is the notion of removing this to be found.

They're taking over Britain
Finishing school for globalists
Case study: East London
Filthy rich: the scandal of privatised water
What's to be done about social care?