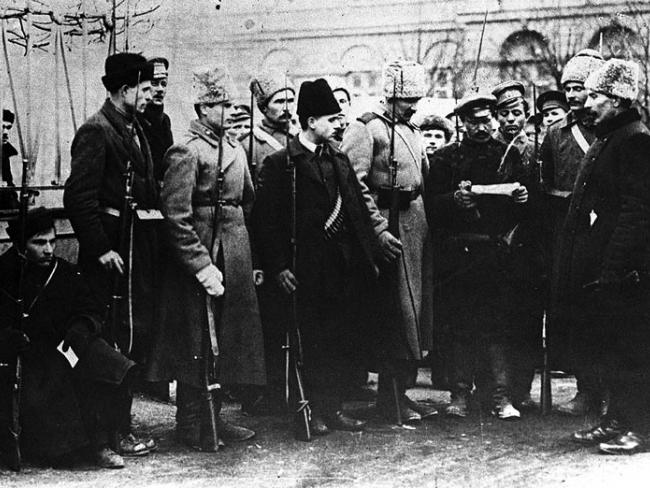 October 1917: Red Guards on patrol near the Smolny, the Bolshevik HQ in Petrograd.

The October Revolution in Russia was a shattering event, splintering the façade of bourgeois solidity. The capitalist rulers of the major powers had unleashed the First World War, confident that workers everywhere would tamely go down in mutual slaughter. But in 1917 the working people of Russia set out on a new path, responding to the untiring efforts of Lenin and the Bolshevik Party.

In February 1917 workers and peasants in uniform took over Petrograd, then Russia’s capital, refusing to continue the Tsar’s war. Russia was hit by widespread commotion and uprising.

This February revolution succeeded: the Tsar abdicated and his government fell. Workers and soldiers’ soviets were formed and representatives elected. The new government of the bourgeoisie, the Provisional Committee of the State Duma led by Alexander Kerensky, seemed to hold power. But the soviets had the armed force of the soldiers and sailors and the support of the mass of working people.

A dual power emerged, rare in history. As Lenin put it, “Side by side with the provisional government, the government of the bourgeoisie, there has developed another government, weak and embryonic as yet, but undoubtedly an actually existing and growing government – the Soviet of Workers’ and Soldiers’ Deputies.”

‘They were not prepared to stop at the victory of a bourgeois revolution.’

But the soviets did not press their advantage during February and March. In effect they voluntarily ceded the power already won to the bourgeois government. The Russian people were left to stew in ever worsening conditions. There was no agrarian reform. Hunger and privation stalked the country; profiteering continued. And still the government tried to prosecute the war.

The Bolsheviks were not prepared to stop at the victory of a bourgeois revolution, because it solved none of the major problems facing the people. But they did not yet know if Russian workers would see things the same way.

On his return to Russia from exile, Lenin drafted his April Theses to point a way forward. He said the war remained an imperialist war; it must be ended by the overthrow of capital. The first stage of the revolution put power in the hands of the bourgeoisie. It must advance to the second stage: power in the control of workers and poor peasants.

Lenin said no support should be given to the Provisional Government. The Bolshevik Party should explain to workers the error in tactics of supporting the bourgeois government. A bourgeois parliamentary republic will not suffice, only a Soviet government of Workers’ and Peasants’ Deputies would fulfil their needs.

The Bolshevik Party held its first legal open party conference within Russia. It  approved the April Theses and Lenin’s call for a period of “prolonged, patient explanation” to win over workers’ minds. It recognised that the only way to end the war was to drop revolutionary “defencism” – and not accept rule by the bourgeois government.

The October Revolution produced two of the best calls to action ever: “Peace, Bread and Land” and “All Power to the Soviets”, appealing to millions desperate for real power to resolve their problems.

Workers and peasants had no interest in the world war being waged for rulers’ interests. The only way to address escalating social problems was to create a government of deputies from workers’ and peasants’ soviets to enact radical measures serving their interests.

The period of “patient explanation” spanned the next six months. “All Power to the Soviets” became the prevailing slogan of the Bolsheviks. The aim was to destroy the apparatus of the bourgeois state, not to tolerate it. For this to happen, people’s thinking had to change on key matters. Otherwise the crucial moment would be missed.

Events swung backwards and forwards over these months. The government hurled tens of thousands more to their deaths fighting the war. Proletarian militias organised as factory squads were developed and armed, particularly in Moscow and Petrograd. In July a huge demonstration in Petrograd calling for a transfer of power to the soviets was answered by force.

Lenin went into exile to avoid arrest. He spent much of August and September producing his book, State and Revolution. This deals with questions of state power, including the achievements and mistakes of the Paris Commune (1870-71).

Gradually, the mood in Russia changed over the summer months as the war continued needlessly and economic disruption spread. Voices were increasingly heard raising the question of control over industry. Which class should be in charge? In agriculture, calls grew for the confiscation of land, livestock and implements.

In August a Bolshevik Party Congress called for preparations to be made for the transfer of power to the working class and peasantry. But at the end of August General Kornilov organised elements to prepare a military dictatorship. This was only thwarted by successful revolutionary propaganda among his troops and by the wrecking activities of militant railway workers.

During August and September the capitalist owners of industry attempted to undermine the growing strength of their workers by shutting parts of industry and engaging in speculation that led to financial collapse and currency depreciation. Workers were paid wages in “falling roubles” – money that simply melted away in their hands. The government used armed force against peasants and backed the big landlords.

In response Lenin and the Bolsheviks proposed an economic programme stating that advance in Russia was impossible without advancing towards socialism. The economic situation could only improve after a revolution. The rule of the proletariat organised in soviets had to replace the supremacy of the bourgeoisie. Production and distribution must be systematically regulated with the nationalisation and centralisation of banking and large enterprises.

In September and October there was a huge upswing in revolutionary strike action across the country. This began and was strongest in factories with Bolshevik leadership. Demands arose for the transfer of power to the soviets. The Bolsheviks were the leading force in most of the workers’ soviets. Morale in the army was disintegrating; Bolshevik ideas were coming to the fore in both army and navy.

On 10 October 1917 (Old Style, see note), the Bolsheviks' Central Committee agreed that “an armed uprising is inevitable, and that the time for it is fully ripe”. At this vital moment, Lenin made sure that everyone remembered the crucial lessons of the Paris Commune and Irish Easter Rising. Strategic buildings, communications, banks, railways, the fleet and so on all needed to be secured for the people by armed detachments of workers.

The revolt in Petrograd was bloodless for the most part. Red Guards, revolutionary workers, soldiers and sailors led by Bolsheviks took over major government facilities with little opposition. They launched a successful assault on the Winter Palace, seat of the Provisional Government, on the night of 25/26 October.

The revolutionary insurrection was timed to hand state power to the Second All-Russian Congress of Soviets of Workers' and Soldiers' Deputies, which began on 25 October. The congress consisted of 650 elected delegates; 390 were Bolshevik. Nearly a hundred were Left Socialist-Revolutionaries, who also supported the overthrow of the Kerensky Government.

‘Imperialism was unable to inflict defeat on the fledgling state.’

When the fall of the Winter Palace was announced, the congress adopted a decree transferring power to the soviets, ratifying the actions of the revolution. The following day, it elected a Council of People's Commissars as the basis of a new soviet government and passed the decrees on peace and land. Banks were nationalised and control of the factories was given to the soviets. Wages were fixed at higher rates than during the war and a shorter, eight-hour, working day was introduced. All foreign debts were repudiated and the land and assets of the Russian Orthodox Church were expropriated.

The October Revolution transformed the Russian state from bourgeois parliamentarian to socialist. It stands out because of the leading role played by the Russian working class in the seizure of power, its consolidation and defence. Though large parts of tsarist Russia were feudal and peasant based, there were substantial concentrations of powerful industry with a politicised working class.

Brushing aside the Provisional Government was a popular move and the only course of action able to address their needs and survival. For the first time ever a working class had forced the withdrawal of its country from an ongoing war

A coalition of anti-Bolshevik, anti-revolutionary groups including invading armies from the western Allies attempted to unseat the new government in the Russian Civil War from 1918 to 1922; they failed. Imperialism was unable to inflict defeat on the fledgling state: the Soviet Union repelled its external enemies.

• Note: dates used throughout are the Julian calendar (Old Style), at the time 13 days behind the Gregorian calendar adopted in Britain in 1752 and by the Soviet Union in February 1918.

Ukraine garners US support as it talks about invading Crimea
Covid-19: Russian lessons for British schools
EU and NATO ramp up hostilities in eastern Europe
No Russian interference in Leave vote
Defence begins at home