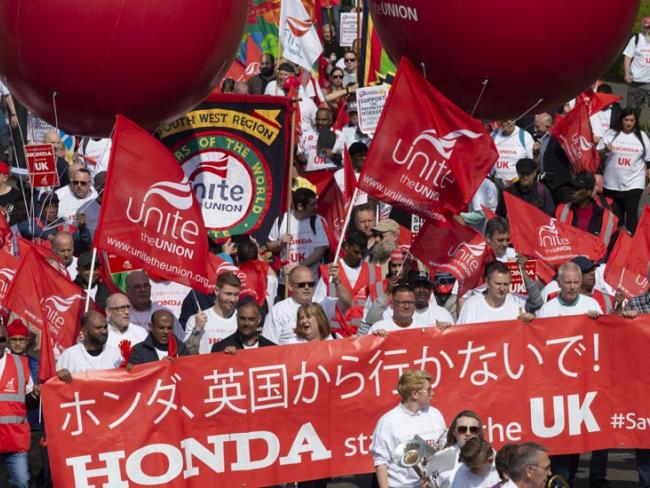 Honda workers marched through Swindon on Saturday 30 March in response to the company’s shock announcement that it was closing its factory there. The march was organised by the Unite union.

Closure will mean the loss of 3,500 jobs at the Swindon plant by 2022. An estimated further 12,000 jobs are at risk across the supply chain and in the local area.

Unite, in calling for the march, said it was determined to fight for these jobs as part of a wider fight for the future of British manufacturing. It pointed to the extensive range of automotive manufacture, design and component supply based in Britain. The union believes that if a facility like Honda Swindon can be lost, then no others are safe.

Honda’s strategic move towards all-electric was not a surprise. But Honda UK workers are angry about the timing and the company’s unilateral decision not to site any all-electric manufacture here.

Honda arguably made the decision to leave Britain some time ago regardless of Brexit. Sales of the Civic have fallen, as have all Honda sales in Europe. Honda seems to give Europe a lower priority than the US and China. The brand sells ten times more cars a year in each of those regions than it does in Europe. New models are often launched up to two years later here than in other parts of the world.