Skip to main content
Home » News/Views » Are we witnessing the slow death of the EU?

Are we witnessing the slow death of the EU? 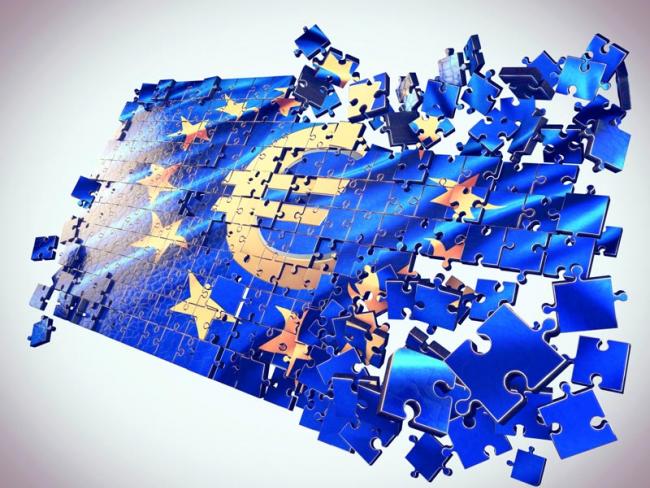 The peoples of the countries that make up the EU are showing what they think of this wannabe superstate. Referendums are sprouting up all over the place, all of them motivated by hostility to the EU. Across the continent the borders are going up. Schengen? What Schengen? Is the EU starting to collapse?

You may think the British referendum on in or out of the EU is the only referendum in town. But you would be wrong. Denmark had a referendum in December 2015, on the issue of cross-EU border policing.

This is the same cross-border policing that, we are told, could put Britain at greater risk of terrorism if we voted to leave the EU. For Denmark it would have meant Europol membership, European Arrest Warrants and bringing the national criminal justice system in line with EU criminal law.

The Danes, who also voted against the Maastricht Treaty in 1992 in a similar referendum, saw this as a straightforward issue of national sovereignty and voted No, despite both the government and the opposition urging a Yes vote.

So Denmark retains its own criminal justice system. If you bear in mind that this referendum took place just weeks after the Paris terrorist attacks, it takes on more significance. Yet we are told doing the same would be a disaster for Britain.

The Netherlands has just had its own referendum. The issue here was ratification of the EU–Ukraine Association Agreement. The result was overwhelming rejection, by 61 per cent to 38 per cent, of the Ratification Act agreed by the Dutch Parliament.

Rejection of the association agreement “would open the doors to a continental crisis in the EU”, bemoaned unelected EU Commission President Jean-Claude Juncker, adding that only Russia stood to benefit from a No vote. The Dutch were unmoved.

After the No vote, Juncker said that the “vote would change nothing”, while a Dutch opposition leader claimed it was the beginning of the end for the Dutch government and the EU. The President of the EU Parliament argued, “We can’t allow national referenda to veto EU foreign policy”.

This contempt for democracy should come as no surprise. Every time the EU elite has not liked a member state’s referendum on an EU issue, they simply told that country to run the referendum again until they got the right result.

Meanwhile, the European Commission has started a legal process that ends with Brussels determining whether the rule of law operates in Poland, creating outrage in that country. “Perhaps for the first time we’re dealing with a situation when, because of [Polish] opposition politicians’ denunciations, the European Parliament has passed a legal act aimed against Poles, our nation,” the Polish government's spokesman, Rafal Bochenek, told state news agency PAP.

‘Now Turkey is dictating to the EU – and still no solution to the migrant issue.’

If Britain votes to leave, don’t be surprised if they try to do the same to us. But this contempt for the people only strengthens the case for leaving the EU and reasserting our own national sovereignty.

Last year’s migrant fiasco began when German Chancellor Angela Merkel, who called for a million migrants to come to Germany. Then the EU – at Merkel’s insistence – outvoted Hungary and other East European countries, forcing them to take thousands of migrants.

It was a big mistake. The outvoted countries resorted to building fences and taking other measures, including use of the military, to secure their borders. First Hungary, then Slovenia, Austria, then non-EU Macedonia and other Balkan countries, followed by Denmark, Sweden and now even Belgium!

Schengen is effectively dead, and the migrant season is under way. But fences didn’t solve the migrant flow. They simply turned Greece into a giant concentration camp. So Merkel and her allies decided to bribe Turkey to become the solution.

Turkey’s despotic leader Erdogan had the EU and Merkel over a barrel. He demanded 3 billion euros and a fast track to EU membership for Turkey, in exchange for the return of migrants from Greece to Turkey, with Syrian refugees going the other way on a one-for-one basis.

After a German TV comedian broadcast a satirical poem about Erdogan the Turkish president claimed he had been insulted and demanded that Germany prosecute the comedian. Merkel agreed, setting the wheels in motion. So we now have Turkey dictating to the EU, receiving 3 billion euros from the EU – and still no solution to the migrant issue.

Hungary is also having a referendum. The question on the Hungarian ballot, to be held in the autumn, is an interesting one. “Are you in favour of the EU being allowed to make the settlement of non-Hungarians obligatory in Hungary, even if the parliament does not agree?”

Another divisive issue for EU members is the question of sanctions against Russia. The sanctions were introduced at the insistence of the US, with Britain its biggest cheerleader. But they are deeply resented by many EU countries, including Hungary, Slovakia, the Czech Republic, Greece, Italy, Spain and Portugal.

Meanwhile, the focus of migrant activity has shifted to Libya, with people smugglers circumventing the EU–Turkey deal. Italy is their target. As a consequence, Austria is closing its border with Italy and building yet more fencing to keep the migrants out.

This raises the possibility that Italy may find itself in the same situation as Greece. Not surprisingly, Italian Prime Minister Matteo Renzi has asked for the same deal as Turkey. Merkel has turned him down point blank and Renzi is said to be furious.

The euro has been a disaster for Eurozone countries – except for Germany. Youth unemployment is nearly 50 per cent in Spain and Greece, nearly 40 per cent in Italy, over 25 per cent in France, and averages 22 per cent across the Eurozone.

Since the start of the euro, far from “converging” (the stated aim of monetary union), eurozone economies have been growing ever more unequal. The continual weakness of the euro leaves it vulnerable to speculation. In April another slump in its value coincided with a report from the OECD which said it is doomed to remain a weak currency indefinitely.

Are we witnessing the slow disintegration of the EU? We can only hope. A vote to leave the EU would be an act of solidarity with the workers across the EU who are suffering from this would-be superstate.