Buses – the fight for the future 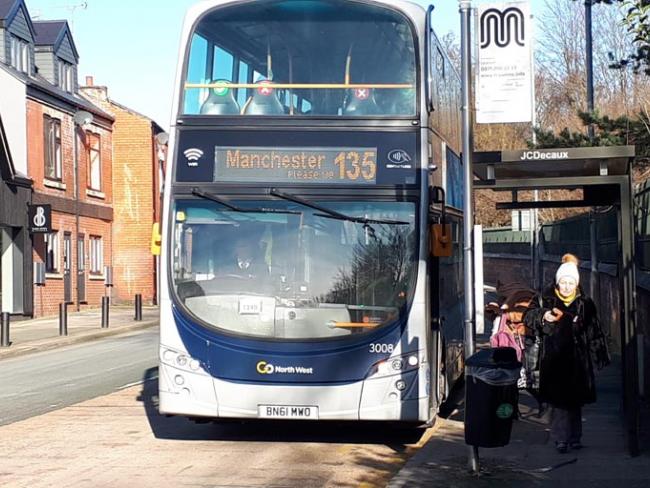 Manchester is set to be the scene for a major battle over Go-Ahead’s attempt to “fire and rehire” workers on worse pay and conditions. Photo Workers.

Before Covid-19, 4.4 billion journeys were made by bus each year. Buses are the backbone of Britain’s public transport system, but workers will have to fight to keep the quality bus services the country needs.…

No one  can predict with any certainty what the impact of the Covid-19 crisis will be on travel patterns and volumes. Encouraging early forecasts suggest the bus industry will eventually recover to around 80 per cent of pre-Covid-19 demand.

The industry is currently running nearly 100 per cent of pre-pandemic services but with capacity reduced to a little over 50 per cent owing to the needs of social distancing. Despite the government’s mixed messages about the safety of travelling by public transport, before the second lockdown buses were carrying around 55 to 60 per cent of pre-Covid-19 passenger numbers, a real achievement in the provision of vital services to key workers. This has been accomplished because the government has pumped large sums of money into the private operators to protect their financial positions.

Even before Covid-19, cuts in subsidies meant that passenger numbers outside of London had fallen to their lowest levels in 50 years. And while in London bus usage was still historically high, in other cities it has collapsed to historically low levels.

In London, the local authority (Transport for London) decides what bus services the city needs, and then invites bus companies to compete to run those services. TfL sets the fares and ticket types, which can be used on all services regardless of which company runs them. They also set the timetables, the quality of the vehicles, and even the colour they are painted – always the traditional red! It may not be public ownership, but it does represent much greater public control.

'Money available for subsidies has been getting progressively smaller...'

In the rest of the country, many services are run on a commercial basis, with companies competing with each other on lucrative routes. The local authorities step in to fund the less profitable or unprofitable routes, or even bus services run at less busy times like evenings and Sundays. And the money they have available for such subsidies has been getting progressively smaller over recent years.

In Manchester, the campaign group Better Buses for Greater Manchester  was launched in 2018, highlighting the fact that bus firms had paid shareholders £1.5 billion in dividends in the previous decade, while fares had soared and services had been axed. They pointed out that fares had gone up by an average of 55 per cent during that decade, with some passengers seeing increases of 100 per cent.

In January 2020, just before the Covid-19 crisis, 11,000 people signed a petition, delivered to the Greater Manchester Combined Authority (GMCA) by a protest march. It called on the GMCA to introduce a franchise-based system like that in place in London as a first step to improve Manchester’s bus services.

The GMCA has understandably delayed making a decision about franchising, given that the impact and effect of Covid-19 remains uncertain. But the authority seems to accept that franchising will probably offer the best value for money solution available to it, not least to ensure a planned local bus network that would be fully integrated with its extensive tram system and local rail services.

The GMCA’s move to franchising is thought to be unpopular with Manchester’s bus operators, who see it as a threat to their profits. And GMCA’s bus services are directly threatened by the greed of at least one of their operators.

Go-Ahead, new boys on the block, arrived in Manchester two years ago having purchased a massive bus depot and 163 buses from First Group for £11.17 million. Trading as Go North West, the subsidiary made an operating profit of £77.9 million in 2020. But clearly, that level of profit is not enough.

Even though the company is propped up by government subsidy during the Covid-19 crisis,it is pushing for significant cost savings. After sham negotiations with the Unite union, the company decided to get its managers to personally deliver letters to over 400 bus drivers with an ultimatum – sign a new and much inferior contract, or be sacked on 8 May.

Unite members returned an 82 per cent yes vote in favour of strike action, which will cause disruption to 30 bus routes throughout the Greater Manchester area and beyond. (See News, page 5.)

RATP wants its London United drivers to work far longer hours for £2,500 less each year. The company also threatens to introduce zero hours style contracts, which would result in drivers only being paid for when they are physically driving a bus. and not when they are actually at work.

Drivers at Epsom-based Quality Line are paid £2.50 an hour less than drivers at RATP’s other subsidiaries. The company has offered another 7p per hour!

London Sovereign drivers operating bus services in North West London have been offered a pay increase of just 0.75 per cent, which is well below what has been offered by other operators.

Another bus workers’ union, RMT, has accused employers of a “wild west approach” to Covid-19 safety regulations and measures, playing fast and loose with their members’ health and safety.

A survey  completed by over 900 workers highlights their concerns, not surprising given the fact that nearly 40 bus drivers in London alone have died of Covid-19 related illnesses.

‘Employers are playing fast and loose with health and safety…’

The survey also found that the lack of an industry-wide approach to Covid-19 in the bus industry has created significant disparity in measures being adopted by bus operators to protect workers from coming into contact with Covid-19 at work.

More than 4 in 10 bus workers do not have access to washing facilities at work or on their route, more than half report that their company has not put provisions in place to allow cashless travel, and less than a quarter have an exact fare policy at work to minimise cash handling. Nearly 7 in 10 bus workers believe their employer has put business priorities before safety during the pandemic.

As one member commented “The company is only worried about revenue, not employees.”

The bus industry was mostly privatised in 1986. And in the years that followed, pay and conditions were trashed. Despite the severe weakening of union organisation, bus workers have over the years managed to organise and claw back some of those losses. That progress is now under threat.

The pandemic has clearly given employers a new confidence to attack their workers, and it will need enormous unity and considerable tactical nous if workers and their unions are to successfully face down the onslaught. Only then will they ensure that Britain has the quality bus services it needs and deserves.