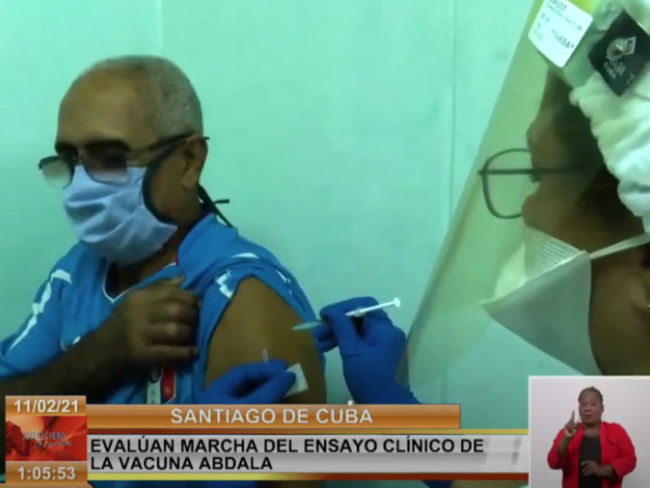 Cuba’s thriving biotechnology industry has succeeded in producing five kinds of vaccine against Covid-19, enabling it to start delivering a mass vaccination programme, two of which have gone through clinical trials. But the US-imposed blockade is preventing it from importing syringes, among other vital medical equipment and supplies.

Even so, the blockade hasn’t stopped it from shipping supplies of its Abdala vaccine – named after a book by Cuban national hero José Martí – to Venezuela. Deliveries of the three-shot vaccine, which Cuban scientists report has an efficacy of more than 92 per cent, began on 24 June.

Venezuela had been relying on COVAX, the vaccine-sharing initiative backed by the UN and the World Health Organisation, but the Swiss bank UBS recently blocked payments to COVAX as requiring “investigation”. UBS has refused to comment on what needs investigation or why. According to Venezuela the blame lies squarely with the USA.

“Send us the vaccines or give us the money back."

According to news agency Reuters, Venezuela’s president Nicolás Maduro said yesterday (3 July) on live television that officials would be told this week to give the COVAX system an ultimatum: “they send us the vaccines or they give us the money back, period.”

Maduro has also demanded that President Biden authorise the release of the funds, arguing that the blocked payments constitute “robbery”. “One thing is an ideological and diplomatic difference with the US government, but the health of the people is quite another,” he told reporters.

Cuba, meanwhile, has declined to join the COVAX system and has forged ahead with developing its own vaccines.

The day before Venezuela started receiving the Cuban vaccine, the UN General Assembly backed a Cuban resolution calling for an end to the illegal and immoral US blockade of Cuba. 184 countries, including the UK, voted for, with just 2 against – the USA and Israel. Brazil, Colombia and Ukraine abstained. It was the 29th year in a row that the UN has called on the US government to end its cruel embargo.

Cuba’s Foreign Minister Bruno Rodriguez Parilla told the UN that the blockade was a “deliberate aim by the US to punish the Cuban people as a whole. It is a massive, flagrant and systemic denial of the human rights of the Cuban people.”

The US has imposed the blockade ever since the revolution. It has cost Cuba an estimated more than $130 billion over the years (at current prices), according to a report from the UN’s secretary general in 2018.

“Like the virus, the blockade asphyxiates and kills, it must stop.”

That figure has now risen. Rodriguez estimated 2020 losses alone to be $9.1 billion. He said that the sanctions have made it harder for his country to acquire the medical equipment needed to develop Covid-19 vaccines as well as equipment for food production. “Like the virus, the blockade asphyxiates and kills, it must stop,” he urged.

He added that the embargo is “an economic war of extraterritorial scope against a small country already affected in the recent period by the economic crisis derived from the pandemic.”

The EU, Britain and Switzerland have all applied sanctions against Venezuela, with measures including asset freezes and travel bans. The UN has condemned the European and US sanctions as “illegal” and “devastating”. The Bolivarian Alternative for the Peoples of Our America (ALBA) has also denounced the financial blockade.

Vaccines plan in tatters
Vaccines – lessons from the front
Covid-19 mandate mania
London on the front line in fight for public transport
Must health and care workers be vaccinated?