Diet and obesity – an issue for the working class 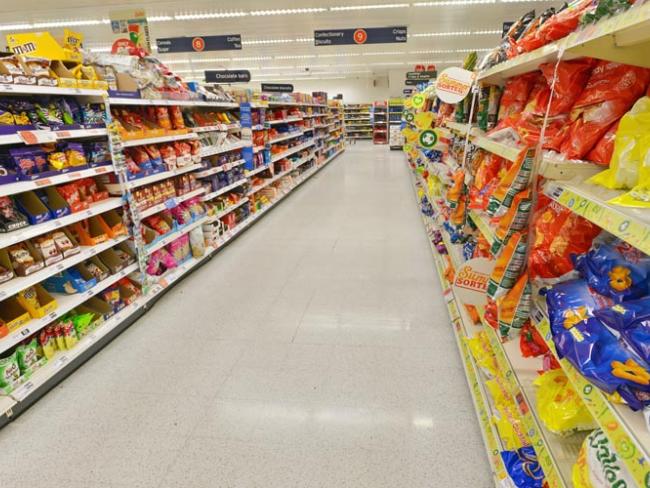 Junk food, anyone? The supermarkets are chock-full of it – and much of it heavily advertised and promoted. Photo 1000 Words/shutterstock.com.

Obesity in Britain is increasing, especially in children. This is a relatively recent development, but the trend is clear and persistent…

The strong link between obesity and poor outcomes from coronavirus has caught the headlines. But there are many other impacts on health and mobility – as well as an increased incidence of social isolation and decreased rates of employment.

Why is this a concern to the working class? We should not live with low quality housing and high levels of pollution. Nor should we accept poor diet and a lack of quality food – two drivers of obesity.

Obesity is detrimental to our lives and is avoidable – and it’s not simply a question of personal choice and responsibility. Fundamentally it is a social and political problem and not a medical one – although the health services must deal with the consequences.

The most common cause of obesity is overeating associated with insufficient physical activity. But that simple truth hides a twist: in Britain – and many other countries – the food industry is in the hands of companies that pump their products with sugars and fats that we humans have been conditioned by evolution to crave.

They do it even with so-called slimming products, adding the weasel words about weight-loss “only in association with a calorie-controlled diet”. And animal fats and sugars are cheap. No wonder that the fast-food outlets that working-class families are blamed for using proliferate in the poorer areas of Britain. Healthy food is not cheap. Nor is it addictive.

Insufficient physical activity is an important factor in causing overweight and obesity. Teachers noticed that children returning to school had become less active during lockdown. Even before the pandemic hit, Sport England found that only 53.4 per cent of children were getting an hour or more physical activity per day, and that reduced to 51.1 per cent in 2020. Sporting activity had largely ceased, though other forms of activity had increased.

Whatever the reason for obesity, it is the leading preventable cause of death in Britain, though for a small minority the cause is genetic, and hence not easy to prevent. It is a key risk factor in coronavirus patients, and lockdown has contributed significantly to sedentary life-styles associated with overeating.

The majority of adults are now considered to be either obese or overweight. In 2019 the Health Survey for England estimated that 28 per cent of adults are obese and another 36 per cent overweight but not obese. Being mildly overweight in your 20s may not seem like a problem, but that is linked to a significant incidence of obesity by the age of 35. Even a weight loss of 5 to 10 per cent, maintained in the long-term, brings significant health benefits.

The cost of all this to the NHS across Britain is projected to be around £10 billion annually by 2050. And wider societal costs, for example people being unable to work or needing social care, are estimated at around £50 billion a year by then.

Figures before the Covid-19 pandemic hit show admissions for weight-related causes now six times the level of just a decade earlier. Prevalence was twice as high in poorer areas – where over a quarter of children are classified as obese.

This is a long-term trend. Obesity in adults almost doubled between 1993 (15 per cent) and 2018 (28 per cent). During that period the proportion of obese and overweight adults rose from 53 to 63 per cent.

What should workers as a class do about this? How can we collectively help to empower individual workers to address the obesity issue on behalf of themselves, their families, the NHS and, in particular, their children?

It’s wrong to deny there’s a problem or to assert that it’s a matter of personal lifestyle choice – that condemns a large number of people to ill health. Fatalism in the face of these alarming trends isn’t an answer either – that wasn’t how our class responded to the pandemic.

Nor is it good enough for us to leave things to others. Politicians are fond of announcing strategies – as the government did in July 2020. The trouble is that they are hopeless at implementing them, even if they have good ideas, which is not always the case.

The 2016 childhood obesity action plan had good analysis and high ambitions. But action has focused on tokens like junk food advertising restrictions, food labelling and the sugar drinks tax. None of this is producing results. That’s not surprising when despite an overall reduction in sugar in drinks there has been an increase in the total sugar in processed food.

The picture is worse with the older children – over 20 per cent are obese, double the level in reception classes. And that figure is increasing. There is a marked and increasing difference in year 6 obesity levels between the least and most deprived –14 per cent compared to 25 per cent.

Medical professionals have a role to play, but we can’t leave things entirely to them. Much of their work presently deals with the direct and indirect results of obesity and not the cause. Bariatric surgery, operating on the gut to reduce food intake, is no answer.

Part of the problem was the transfer of responsibility for this area of public health from the NHS to local authorities as a result of the appalling Health and Social Care Act 2012. There are a few signs that the transfer is being reversed – for example in the 2019 NHS Long Term Plan and in last year’s government strategy.

We need to create the conditions for positive change. That should be part of a wider response – to learn what works and what does not and to understand what is achievable. That entails holding elected politicians to account – and should also involve healthcare professional bodies and unions.

More widely, control of working hours and patterns and availability of quality food in schools and workplaces must play a part. So must consistent support for the school nurse programme. So should the wider availability of cheap good-quality food, and more action to reduce the ultra-processed food with high sugar and salt content heavily marketed by food manufacturers and supermarkets.

But people do not need to be treated as victims or to be taught by their betters how to eat. Stigmatising and stereotyping come in many forms. The government’s illusions of behavioural control are typical also of its approach to obesity – just “nudge” people into seeing the consequences of weight gain – and how it affects others, and people will act once they see how bad things will get.

That’s not much different from shaming people for their weight and assumes that only the enlightened can see the outcomes, and the stupid get fat through personal choice.

As with the pandemic, there’s also the tendency to exaggerate and create scary headlines. The facts are bad enough without that approach – “you are all guilty” denies the possibility of specific, practical solutions.

We can’t reverse all the failings at once. But it’s time to make a start on what can be achieved and not be limited by the failed attempts so far. This needs resources and to be prioritised. Obesity is at least as much of a health problem as smoking and is less easy to manage.

There is no obesity without overeating and inactivity. There are no drug dealers without addicts and no capitalism without exploitation. The solution to all things is in our hands. The class has shown itself to be uniquely responsive to compliance with public health messages during the pandemic. This particular “epidemic” can’t be vaccinated away.

Nursing shortages: move on from the blame game
Would-be doctors face squeeze while NHS continues to hire from abroad
Protocol denies life-saving drug to Northern Ireland
Nurses need action, not outrage from the sidelines
Applications flood in for medical schools