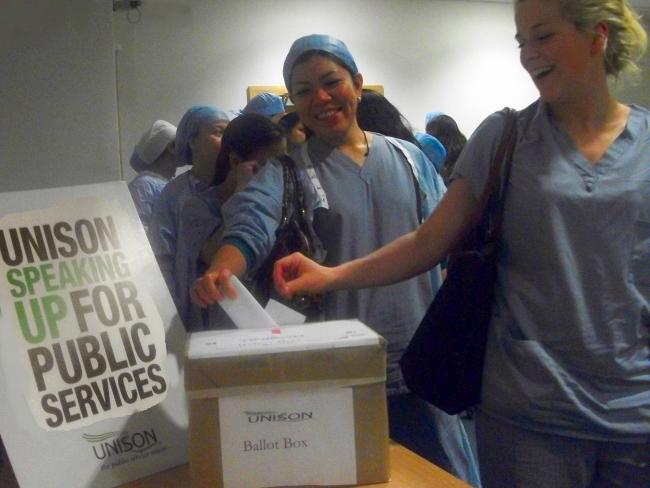 Theatre staff at St George’s, London, voting in a pay ballot. Now they must also face the challenge of 7-day working in the face of government attempts to break national bargaining.

People who work in health know that low levels of service provision over the weekend put patients’ lives in danger. The problem is how to move to 7-day provision while preserving wages and conditions...

NHS staff are being faced with unceasing pressures to produce greater patient care for less investment. Trusts, NHS managers and the government are beginning a softening up process to increase productivity within the existing pay gradings, overall pay envelope and NHS budgets.

While maintaining the pay freeze until at least 2016 (which in fact is a pay cut because the 1 per cent settlement in 2014 is not consolidated), the Health Secretary of State has asked the Pay Review Body to present its “observations” on the delivery of future healthcare without increasing the wages bill.

Hence out-of-hours payments, unsocial hours payments, high cost area supplements, overtime, shift patterns, recruitment and retention premiums, extension of the core working day, decreased staffing numbers, deskilling of staff and so on – all of these working conditions are up for review.

The difficulty NHS staff face – and are aware of – is that statistics suggest that patients with a life-threatening condition have a significantly lower chance of survival if they are admitted to hospital at, or immediately prior to, the weekend.

Despite hospitals never closing and providing a 24-hour, 7-day-a-week service, most of that service consists of a mixture of basic nursing care and emergency-only medical cover. The vast majority of actual diagnostics are squeezed into a tight timeframe of around 8 to 10 hours a day, Monday to Friday. Clinics invariably run at those times when most workers themselves are working, and out-of-hours GP services are either scarce or non-existent depending on locale.

Most of society carries on seven days a week. But should you be unlucky enough to require admission to hospital on a Friday afternoon the most crucial 48 hours of your admission will be spent in an environment where emergency-only levels of doctors are available. You are not even likely to meet those who will primarily be responsible for your treatment until sometime on Monday.

A growing number of health care professionals accept that the traditional hours worked within NHS establishments, and thus the services that can be provided, do not best meet the needs of the nation. Reports have been commissioned by NHS England into running clinical services seven days a week.

The British Medical Association has already stated that the current situation is unacceptable and has signalled that it is willing to work with “all stakeholders to achieve a clear understanding of what working patterns will be required”. But it has also made clear that the priority for spending should be on urgent and emergency services, as this is the area of investment which, in its view, can make the most difference to life expectancy.

This view is underpinned by work undertaken by the College of Emergency Medicine’s project to see how best to care for people who enter the health care system via emergency departments. The BMA points out that given current financial constraints it does not believe “that the resources could be freed up to deliver routine and elective services seven days a week”. That is why it wants any investment targeted at where it can make the most difference.

‘It is far from clear as to how a move to 7-day working will be funded.’

It is far from clear as to how a move to 7-day working will be funded. Most nurses and health care assistants already work over seven days, as do other clinical, technical and support staff in lesser numbers. A major concern of nursing unions is that recent trends to employ fewer senior nurses and reduce the ratio of registered nurses to health care assistants may be part of the explanation of mortality rates.

Currently unsocial-hours payments are the norm for all of these workers. History shows that where 7-day working is the norm, employers tend to seek to consolidate these types of payments into basic salaries and wages, usually to the overall detriment of the workforce.

Either way, no group of NHS workers can see themselves or their practice as being Monday to Friday only. But any enhancement must entail employing more nurses, and currently there is real practical difficulty in filling nursing vacancies, especially in London where wage rates are so far out of step with housing costs.

The Department of Health’s plans to recruit nursing staff from elsewhere in the EU are unravelling fast, with even the European Commission projecting an EU-wide shortage of 590,000 nurses by 2020.

There are now several challenges NHS workers and their trade union and professional bodies face. We cannot justify five-day working when the demands of health provision clearly indicate seven-day working is the required norm. So the following questions need to be addressed:

a)  How do we maintain national terms and conditions, Agenda for Change, in the face of a government committed to local/regional bargaining?

b)  How do we maintain national terms and conditions in the face of trusts seeking to privatise all their functions and break away from the NHS?

c)  How do we improve quality of healthcare provision in the face of an ideological attack seeking to destroy the very concept of a “national” NHS.

NHS workers need to initiate the debate within their trade unions and professional bodies to determine a clear strategy and tactics of response. The initiative for handling such change must remain with hospital staff and not with the privateers and enemies of the NHS.