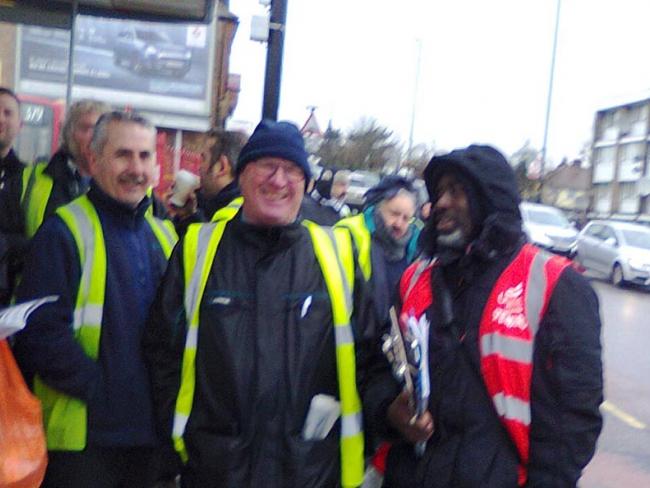 London’s bus drivers were on strike again on 5 February in their fight to force bus companies to sign a single agreement covering pay for this key section of the capital’s transport workforce.

At the Arriva garage in Ponders End, Enfield, north London, the Unite union representative told the CPBML why the drivers are striking. He explained that because of Transport for London’s bidding process and its policy of an open market all the existing 18 bus companies were engaged in a “race to the bottom” to win contracts at the expense of the terms and conditions of their staff.

As a result the union is now faced with over 80 different rates of pay. As well as pay and standards being driven down for new drivers, senior staff are also seriously affected – often being denied overtime in favour of cheaper more junior drivers and also not being allowed, on grounds of cost, to swap shifts with more junior staff for domestic reasons.

There are also concerns about safety as experienced maintenance staff are leaving in increasingly large numbers, and are being replaced by cheaper, less-qualified workers.

‘It is a fundamental right to be able to revoke your labour if you have a dispute with your employer.’

The old London Transport was created in the 1930s to deal with the chaotic public transport situation on London’s roads. But its successor, Transport for London, seems to be washing its hands of responsibility for the chaos it has helped create. A meeting with the unions has been hinted at but up until now Transport for London has refused to set a date.

The action in Enfield was well supported, with only a handful of buses going out. As to threats of curbing or banning such action in future the representative’s response was that they are losing pay to go on strike and that it is a fundamental right to be able to revoke your labour if you have a dispute with your employer.