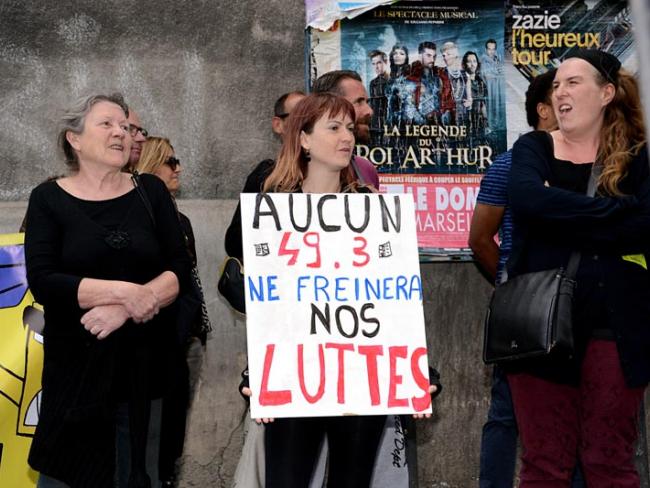 Marseille, 23 May 2016 : Protest against French Labour Minister Myriam El Khomri’s proposed laws during her visit to the city. Placard reads, “No one will put a brake on our struggles.” Photo Gerard Bottino/shutterstock.com

A report has been sent to CPBML News of the internationalist rally held in Paris on 28 May, at which speakers from France, Germany, Italy, Greece and Belgium expressed their support for Britain leaving the European Union.

The speakers – trade unionists, students and socialists – see Brexit as a blow against capitalism and something to be supported. Many of them drew parallels between Brexit and the current struggle of French workers against the state’s attempts to impose new labour laws, the so-called Article 49-3.

“Europe,” a student from Nanterre University said, “is not the European Union!” Claude Charmont, a trade unionist in the Paris region, stated, “In Britain as in France, the voice of the people must be heard, Leave must overcome!”

A particularly powerful contribution came from Belgian trade unionist Roberto Giarrocco from the country’s Unity Committee. He began by talking about Belgium’s prison officers, currently fighting against “a side of the European policy that takes the form of fiscal targets that, most concretely, translate into prison staff cutbacks”.

Then he talked about mistaken ideas that compare leaving the EU with leaving a company during a strike instead of staying to fight. The comparison doesn’t work, he said. “The European Union is not our company…it is a foreign body.” It's not so much a vote to leave the EU – “…it would be more accurate to say that it is a vote to expel the European Union”.

Brexit, he said, “would set an example for all of us in the other European countries to, in turn, expel the Union”.