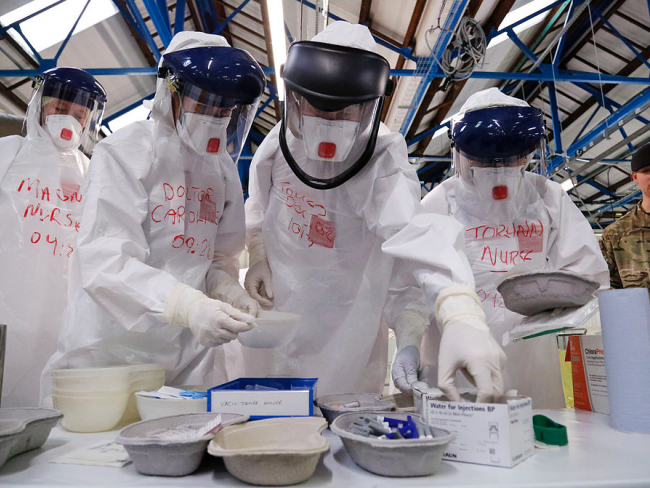 The government can’t say it didn't know. This photo from 2013 shows medics from across the NHS practising work in full PPE – in preparation for a mission to West Africa during the Ebola epidemic. Yet preparation for viral epidemics in Britain has been woefully inadequate. Photo DFID (CC BY-3.0).

Last week Nissan started to make gowns for NHS trusts at the Gateshead College Skills Academy for Manufacturing and Innovation, which is based at its Sunderland plant. The development attracted wide press coverage – but for one woman in particular it is a sign of a serious problem with government policy.

For Kate Hills, who declares that she has been on a one-woman mission to save British manufacturing, sees Nissan’s involvement as a lost opportunity to create a sustainable home-grown PPE industry.

In the middle of April, before Nissan’s involvement, she produced an optimistic podcast for her website makeitbritish.co.uk. In it, she described her battle to enlighten the Cabinet Office of the potential to make PPE in this country.

It’s been an uphill struggle, she says, because no one in government understands the complexity of textile supply chains. And there’s a simple reason for this: because central government and NHS trusts have been buying “off the shelf” products, ready made, they have no idea what the supply chains are.

So when the government appealed to companies to help, it was completely overwhelmed when something like 8 to 10 thousand of them filled in the forms offering assistance. It appears that the government then went in search of a single manufacturer that could meet all its needs – without realising that there is no longer any such manufacturer left in Britain.

Instead, there are thousands of small companies all with vital skill sets. Hills has brought a number of them together to form the British Textile Consortium, a group of UK manufacturers – including John Lewis – working cooperatively to provide the essential PPE needed during the Covid-19 pandemic.

The consortium members, between them, can deliver the end-to-end PPE supply chain, from fabric to cutting, sewing, finishing, distribution. Yet now, five weeks after they responded to the call to help, most companies have heard nothing.

To hear her explain the obstacles is to receive an object lesson in how the loss of manufacturing has harmed our ability to respond to the pandemic. Because the government had been buying “off the shelf” through third parties it had no idea of the specifications, the construction, even what the seams for gowns should be like. “We just said, give us the specs and we’ll find the manufacturer.” But the consortium has still not received the specs.

“I also believe that we can make [gowns] here at a very competitive price. It’s not a difficult product to make. It just needs people sitting at machines,” Hills says in her latest podcast, “and many of the manufacturers have got workers who are keen to come in and help. They’re keen to set up their factories in a new way so all their staff are socially distanced, they’re keen to all work together so that between all of them they can provide the volume that’s needed.”

‘There is no centralised planning, control or oversight of NHS procurement.’

To make matters worse, it seems that the division of the NHS into competing trusts has hindered everyone. There is no centralised planning, control or oversight of NHS procurement. Individual hospitals, trusts and care homes have been trying to place their own orders. No wonder there is confusion and shortage.

Hills has a background in textile manufacturing, and is acutely aware that the whole world is looking for these products and the machines that make them. There is a desperate shortage. That is why, she says, we have to start making them here, in a nationally organised, planned way.

“There’s been several companies in the press that you’ve probably read about who have made gowns,” says Hills, “but they’ve been making them and giving them away for free to their local NHS trusts. Now that is brilliant as a short-term solution, but it’s not a long-term solution, and that is what I have really been pushing for, where we see the government procuring these type of PPE products from UK manufacturers, not just now but in the future as well.”

Here is the source of her frustration over the Nissan announcement. “I read at the weekend that Nissan are making tens of thousands of gowns. Nissan, the car factory. Which is really fantastic…but it’s not a long-term solution. I mean let’s not kid ourselves that as soon as they can come out of lockdown and get their staff making cars again, they’re not going to make gowns any more. And what happens then to the supply of gowns and PPE to the NHS?”

Meanwhile, she said, “It’s been over five weeks now since I have been trying to establish a UK manufacturing base for PPE because there’s such a shortage in the UK….My main aim in all of this was to have the government, Cabinet Office, acknowledge that we have a good UK textiles supply base here that they should be turning to, to help dig them out of the hole that they’ve got themselves in in terms of getting personal protective equipment to front line staff and to NHS trusts and hospitals.

“And we’re now nearly five weeks on, in fact we’re more than five weeks on, and to the best of my knowledge there has not been a single gown manufactured in the UK procured by the central government.”