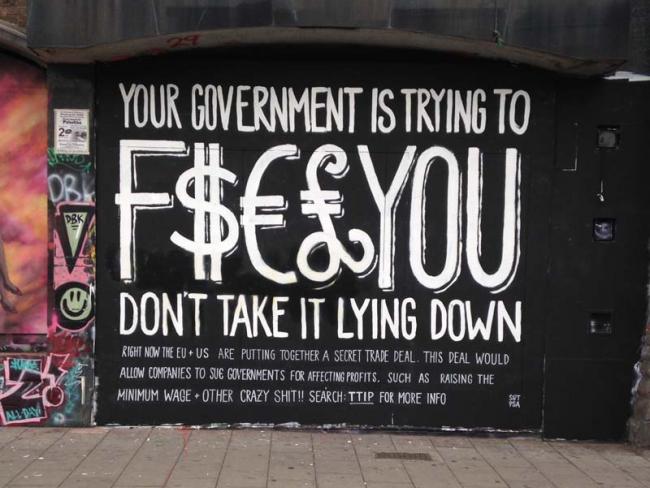 It’s been a bad month for TTIP, and things could soon get even worse for those pushing the transatlantic trade deal. At the start of the month, a UN human rights official announced that secret trade deals were a threat to human rights. Days later, the European Parliament followed up by making it clear it would not support a deal with the now-reviled investor state dispute settlement – ISDS – mechanism.

A further blow came on 12 May when the US Senate refused to grant TTIP “fast track” status when – at this rate, months if not years away – a proposal comes from the White House and Brussels. Fast-tracking would have meant that Senate and Congress could only have voted on the deal as a whole, rather than voting on clauses one by one. President Obama wanted to be able to present a once-in-a-lifetime, take-it-or-leave-it ultimatum.  In a stinging rebuff, only one Democrat voted for the fast track.

Now the European Parliament is causing more problems. A key committee is set to agree a slew of objections on 28 May, in preparation for a vote on the floor of the parliament some time in the second week of June.

These legislative developments haven’t come out of the blue. They are the result of the relentless growth of opposition to TTIP across Europe and the US, and particularly in Britain. When the European Union conducted an online consultation on TTIP, 97 per cent of the 150,000 respondents – a third of them from Britain – voiced outright oppostion.

Even the TUC, formerly a bastion of support for TTIP, is moving away from criticism of individual elements and towards outright opposition.  Owen Tudor, head of the TUC’s European Union and International Relations Department, told a Brussels news service in April, “We are opposed to TTIP.” He went beyond the previous TUC objections over ISDS and protection of the health service to wider issues, including concerns over “so-called harmonisation of regulatory principles” – one of the cornerstones of the deal – and questioning its supposed benefits.

The TUC still has a way to go. It still supports the right of the European Union to negotiate trade deals on our behalf, and goes along with the myth that free trade and ever-lower tariffs are a good thing.

So far, more than 1,890,000 people across Europe, including more than 285,000 in Britain and over a million in Germany, have signed a “self-organised European Citizens’ Initiative” calling for a halt to TTIP. Provision for European Citizens’ Initiatives is built into EU law,  but they are set a high hurdle, requiring a million signatures with qualifying numbers in at least seven EU member states.

When the Initiative to stop TTIP reached a million, the EU turned round and said that it could not apply to trade negotiations (a decision that is being legally challenged). Undeterred, campaigners are continuing with their self-organised, “unofficial” Initiative, aiming for two million signatories. It now has qualifying numbers in 13 member states.