Skip to main content
Home » TTIP - it's still there

TTIP - it's still there 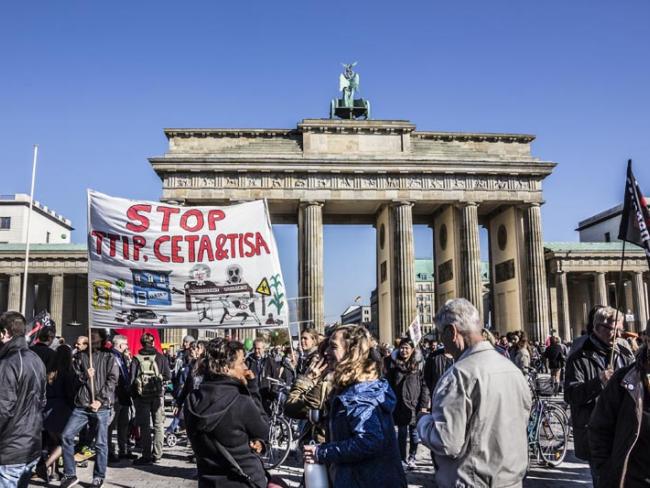 The referendum campaign saw the development of a malicious myth. That myth sought to give the impression that TTIP – the Transatlantic Trade and Investment Partnership – is on its last legs. Or at least that if the treaty as a whole is not doomed, then the contentious parts of it are.

In a desperate attempt to sway voters, Green politicians argued that staying in the EU is the best way to defeat TTIP. “The fight against TTIP is working,” said Green MEP Jean Lambert in a message during the campaign designed to talk not about TTIP but to argue for Remain.

A message sent to people who had emailed her as an MEP calling on her to oppose the EU/US trade agreement repeated a whole series of dubious assertions, including saying that “even if the UK does leave the EU, that doesn’t mean the end of TTIP”.

The TUC stepped in too. “It seems the growing coalition of EU opponents is starting to have a real impact on this bad deal,” it said in a briefing issued during the referendum campaign. The pressure is paying off, it said. “While David Cameron and the TTIP’s other main backers had hoped to push a hyper neoliberal version of the deal through by now, trade unions and civil society pressure uniting across Europe has put paid to that.”

Put paid to it? It’s an extraordinary statement, backed up by nothing but wishful thinking and a desire to negate the impact of TTIP in the referendum campaign.

And Labour leader Jeremy Corbyn went out of his way to say that if he were leading a government he would veto TTIP. Even if he were elected before TTIP is enacted (and there are a lot of ifs involved in that), the EU is trying to ensure that there will be no national vetoes (see Box 1).

‘Despite all the opposition, the negotiations go on.’

The truth is that despite all the opposition, the negotiations are proceeding. While the referendum campaign was in full swing, the US and the EU blithely carried on with their TTIP plans. The next negotiating round – each round takes about a week – is set to take place in early July in Brussels.

The exact date is – like most of the negotiations – a secret. After all, no one taking part wants the uncomfortable spectacle of citizens protesting outside the talks.

And with all the worries about the UK referendum, and a rising tide of criticism, there have even been calls to accelerate the TTIP talks.

That’s why European Commission President Jean-Claude Juncker called on the EU’s member states to reaffirm their commitment to TTIP at the summit they conveniently scheduled for the week after the referendum.

There’s been no mention of this by the Greens, nor any mention by the TUC of the revelation by WikiLeaks on 25 May that the parallel talks on a Trade in Services Agreement – known as TiSA – now include a previously secret annex to the section on state-owned enterprises (SOEs) which it says “imposes unprecedented restrictions on SOEs and will force majority owned SOEs to operate like private sector businesses…This corporatisation of public services – to nearly the same extent as demanded by the recently signed TPP – is a next step to privatisation of SOEs.”

There’s a reason why the backers of free trade have their eye on health services: healthcare accounts for more money than any other sector of activity – about $8 trillion (thousand billion) of global spending each year, and it is set to grow at 6 per cent a year. To put that into context, the combined revenues of the world’s automobile industries, including commercial vehicles, is around a quarter of this, some $2 trillion.

No wonder asset management group Carlyle said in a report in 2015 that, “Needless to say, such rapid growth makes the health care sector a unique destination for capital in the current economic environment.”

A big chunk of the money spent on healthcare is in pharmaceuticals. So it’s no surprise that pharma companies spend more on EU lobbying than any other industry – and hugely more than organisations such as trade unions and non-profit bodies.

A report by Corporate Europe in October last year revealed that the industry spends nearly €40 million a year lobbying Brussels, 15 times the expenditure of groups working on public health or access to medicines. What are they trying to get out of it? Market access.

In theory, the EU treaties should mean that healthcare is a “national competence”, and that accordingly the EU cannot dictate anything. In practice, it’s not so clear.

The European Union has been assiduously eating away at aspects of healthcare. It has assumed competence for cross-border healthcare, so it has a great deal to say about whether the health services of one country have to pay for treatments carried out in other countries.

And in 2001 it assumed responsibility for the testing and licensing of new drugs and medical devices, with disastrous consequences. Its Clinical Trials Directive led to a drop of around 50 per cent in the number of clinical trials carried out in Britain, mainly through the imposition of bureaucratic rules that academics had neither the time nor the money to meet (companies, with their dedicated compliance staff, were less troubled).

‘The EU has been eating away at aspects of healthcare.’

In a policy statement in 2010, Cancer Research UK talked about the difficulties placed in the path of multinational clinical trials, of a “greater administrative burden (and increased costs and unnecessary delays)” as well as “impractical” requirements. It added, “We have no evidence that patient safety has increased since the introduction of the [Directive]…”

From 2001 to 2006, the proportion of the world’s clinical trials conducted in Britain fell from 6 per cent to 2 per cent. The Directive has since been superseded by a Regulation in which the EU determines the law directly.

Another mechanism for interference in health policies is the European Semester, the strange name adopted by the EU for the process that requires member states, particularly in the Eurozone, to gain approval for their national budgets (for a fuller explanation, see cpbml.org.uk/troika).

As a result, the Commission can seek to interfere in just about anything. “The health system is no longer viewed in exclusively national terms,” said Paola Testori Coggi, Health and Consumers Director General at the Commission, whose tentacles now reach into every health ministry in Europe.

Against this background, the statements by trade union Unison that the NHS would be safer inside the EU ring rather hollow.

Yet with all the discussion of TTIP’s affect on the NHS – not to mention its hotly disputed Investor–State Dispute Settlement mechanism – there has been curiously little attention on the issue at the heart of it: free trade.

Trading freely is one thing. It’s when one country sells goods to another country. Free trade agreements are quite another. In these, countries “agree” that there will be little if any restrictions on how goods or services may be sold or companies set up.

Specifically, the agreements seek to ban any protection for national industries, opening them up to the cheapest competition the world can provide. The European Union has been persistently trying to force these free trade agreements – under the name of “partnerships” – on developing countries, in particular in Africa (see Box above).

With the referendum over, the task of rebuilding Britain is urgent. How can we rebuild our country if we cannot use public money and regulations to protect established industries under threat from foreign dumping, or nurture new industries?

Or to put it another way, how can multinational corporations raid the whole world without free trade agreements to clear the path for them?

The consequences had we voted to stay in the EU are clear: TTIP, TiSA, the domination of global corporations, and the subordination of nations. Brexit must mean having no part of these agreements.