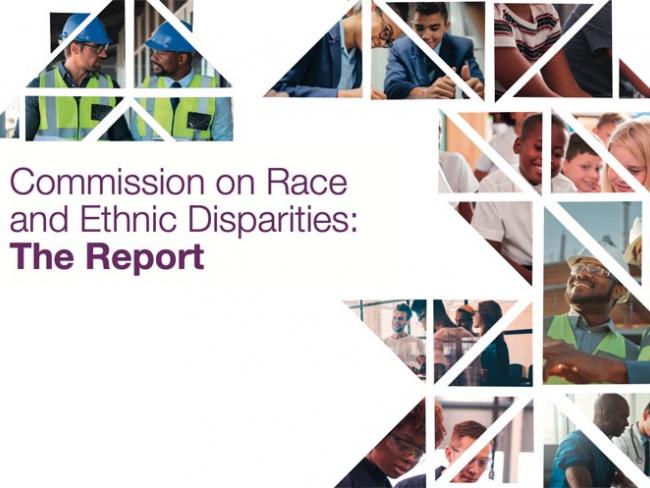 Cover of the report from the commission chaired by educationalist Tony Sewell.

The Sewell report has not gone down well with those committed to the politics of “identity” and division on the basis of skin colour. Above all, it’s optimistic – and with good reason…

In a landmark report, issues of race and ethnic relations and achievements in contemporary Britain have been examined by a distinguished panel of commissioners, which acknowledges that the situation is by no means perfect and that there is much left to do.

But read on: “The country has come a long way in 50 years and the success of much of the ethnic minority population in education and, to a lesser extent, the economy, should be regarded as a model for other White-majority countries,” it said. The optimistic and forward-looking flavour is notable.

That report came from the Commission on Race and Ethnic Disparities, chaired by educationalist Tony Sewell. It was commissioned last summer by the government in the wake of the Black Lives Matter furore. It was asked to examine the state of race and ethnic disparities in this country, why they exist and what should be done to eliminate or mitigate them. The ten commissioners were drawn from a variety of fields of expertise including science, education, medicine, policing, economics and broadcasting. All bar one were from ethnic minority backgrounds.

The commission used a mass of data compiled by the Cabinet Office’s Race and Disparity Unit, first set up in 2016, together with evidence from other experts and by speaking to communities. The report, published in March this year, is based on evidence rather than anecdote.

Looking particularly at the areas of education and training, employment, crime and policing, and health, the report comes to a number of main findings and 24 recommended actions. It describes some areas of continuing obstacles, but also the need to build on many successes.

‘The report is based on science, not on anecdote…’

It boldly states that: “The evidence shows that geography, family influence, socio-economic background, culture and religion have more significant impact on life chances than the existence of racism.” Racism has too often become a catch-all explanation, implicitly accepted rather than examined, it says.

What’s more, to deal with poor outcomes identified for some groups – for instance, for Afro-Caribbean and white boys in education – the broad answer is to take action to improve outcomes for everyone. The report carries a clear message: everyone needs to feel part of Britain and work together to create better lives here.

It’s not surprising that the report went down badly among those who are invested politically, financially and emotionally into the notion that Britain is overwhelmingly divided racially, that no progress has been made over the past decades, and that white people are to blame. They want well known educational findings such as that white boys are achieving among the lowest educational results, that children of black African families are among the highest achievers, to be pushed aside. Particularly upsetting to them is Sewell’s call for an end to the guilt-inducing “decolonising of the curriculum”, and that all children should be taught about the making of modern Britain, and to see it as their own heritage.

On health disparities, Sewell calls on black and Asian people to take part in health trials to enable data to reflect the whole population. The report shows that health outcomes are worse for some white groups than for many ethnic minorities. Stop and Search policing is not rejected but rethought, in part to protect young black men – major victims of homicide in cities – more effectively. This reflects the views expressed by many mothers of young murdered men in London.

Sewell calls for an end to the term BAME – Black, Asian and minority ethnic – given the complex picture of the population of Britain. The catch-all term, he says, obstructs genuine investigation of differences in research. And the report rejects victimhood, calling on people to take responsibility by pushing for and grasping opportunities.

Even before publication, the 258-page report was beginning to be heavily criticised for fear of it coming to the “wrong” conclusions. And it was met by a torrent of shaming and abuse when it actually appeared, mostly from people who had not had time to read it but had heard about it and knew they couldn’t agree with it.

Probably its worst sin was coming to the conclusion that, overall, disparities were not due to “institutional racism” but to a multiplicity of factors.

Labour leader Sir Keir Starmer quickly stated that although he had not read the report, it couldn’t be right because of its rejection of “structural racism” as the most important element in disparities. And the national secretary of the GMB union Rehana Azam accused the commission of being “cynical”, “immoral”, and “irresponsible” because “institutional racism exists”, her evidence being that ethnic minorities are dying in greater numbers from Covid! Norwich Labour MP Clive Lewis even presented the commissioners as the Ku Klux Klan in a tweeted photo.

The commission members have been subjected to vile racial slurs and received death threats. In the week after publication the commission expressed its shock at the refusal to even read the report or discuss the findings on their merits.

Toxic voices from the race relations industry called Sewell “a token black man”, and worse. The UN  Working Group of Experts on People of African Descent (like other puffed up UN organisations which claim the right to sit in judgement on British society), in a grossly irresponsible charge from an international organisation, accused the Commission of rationalising “white supremacy” and called for it to be disbanded or reconstituted.

On 20 April, defending the report in parliament, equalities minister Kemi Badenoch denounced such “appalling abuse and false assertions” and accused hysterical opposition MPs of attacking the report “for daring to think differently”.

On Sky News commission member and space scientist Dr Maggie Aderin-Pocock expressed horror at the, to her, unexpected hysterical outrage. “We need debate, we don’t need to be hurling insults,” she said. To the charge that the report puts a positive spin on slavery, she replied, “The intention was to say that despite slavery, the human spirit of the black people involved in that triumphed over that adversity.”

As in the USA, and largely imported wholesale from there despite Britain being a very different society with a different history, a poisonous race industry has grown up in this country. Great sums of money are made by purveyors of “unconscious bias” training courses to be flogged to workplaces. Companies and institutions are falling over themselves to send their employees to corrective education, largely to demonstrate their own virtue often while doing nothing practical to examine and take action on their own discriminatory practices.

Universities and colleges spend precious funds on spurious academic posts examining the “institutional racism” supposedly pervading the whole of British society. Politicians like Keir Starmer and public organisations like the Football Association feel obliged to demonstrate their correctness of thinking, or hesitate in fear of saying the wrong thing. An accusation of racism can end in the sack or blight a career. Better to hide away and say nothing. Sowing division among the people has become a profitable industry in itself.

There has been genuine criticism of aspects of the report and particular recommendations, but overall it has been welcomed. So let’s celebrate the publication of a report which rejects the grievance mongers, with their promotion of a perpetual miserable victimhood, and which calls for genuine debate and appreciation for the relative health of British society and how far it has come, and for unity in the face of its problems.  This report examines race in Britain and finds a decent people doing its best.

Must health and care workers be vaccinated?
Child care for profit
Autism and unemployment
Youth unemployment: a challenge for us all
Science, technology and progress