Skills and education for the future of Britain 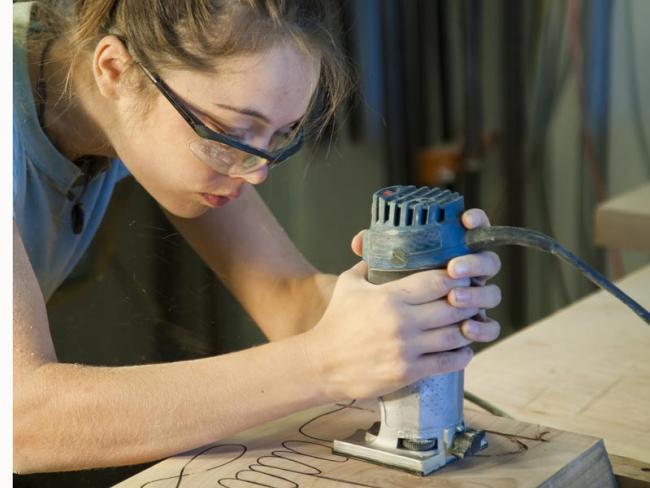 Apprentice using a router on a woodblock. Photo Greg Epperson/shutterstock.com.

Far too many employers avoid training by importing workers from elsewhere. In fact, the TUC estimates that a third of British employers make no investment in training whatsoever. This is not sustainable inside or outside the EU, but outside there is an opportunity to make a change.

Employers have felt secure in the knowledge that they could rely on a ready supply of itinerant labour, both from the European Union and elsewhere. The Home Office visa cap system for highly skilled non-EU migrants, introduced since the referendum vote, has attracted moans from employers. They would prefer to rely on people-trafficking rather than invest in their own workers.

The government’s Industrial Strategy published in November 2017 included proposals that could go some way to changing this. It calls for “a technical education system that rivals the best in the world, to stand alongside our world-class higher education system”. To achieve this, investment is needed – “an additional £406 million in maths, digital and technical education, helping to address the shortage of science, technology, engineering and maths (STEM) skills” and “a new National Retraining Scheme that supports people to re-skill, beginning with a £64 million investment for digital and construction training”.

The government strategy envisages establishing Institutes of Technology, funded to the tune of £170 million, to create this technical education system. But at the House of Lords economic committee in March both the Further Education Commissioner and Association of Colleges argued that the funding was “modest”. It is restricted to a three-year wave of capital funding for existing colleges, and would create few, if any, new institutions.

Alongside creating these institutes, the strategy proposes a new “T” or Technical Level qualification, equivalent to A Levels. The first wave, to be taught from 2020, would cover Digital, Construction, and Education and Childcare. Further subjects would come on stream in 2022: Legal; Finance and Accounting; Engineering and Manufacturing; Health and Science; Hair and Beauty; Agriculture; Environment and Animal Care; Business and Administrative; Catering and Hospitality; and Creative and Design.

‘Employers have felt secure in the knowledge that they could rely on a ready supply of itinerant labour.’

Left to their own devices, employers and colleges will doubtless try to deliver T levels using e-learning methods, at least in part. Online learning was a technology developed within education institutions, but is now captured by the private sector. Even its evangelists recognise that e-learning qualifications have poor credentials, low levels of academic rigour and disastrous completion rates. T levels must be properly taught, with investment in skilled teachers and lecturers, along with the necessary facilities, equipment and buildings.

It is for the working class to determine how these plans will be implemented. An attempt at a quick fix to grab headlines will backfire, leaving Britain less well-prepared, as we’ve seen in the past with education reform. These Institutes of Technology could give the country the industrial skills we need if funded properly and organised in a strategic, planned, national way.

In 2013 the coalition government identified “eight great technologies” as the priorities for research. These were big data, space, robotics and autonomous systems, synthetic biology, regenerative medicine, agri-science, and advanced materials and energy. Are these correct, and should they be the focus of future industrial and skills development? No government minister, MP, think-tank consultant or self-appointed “thought-leader” can answer those questions. But collectively the working-class, with analysis, planning, and attention to our history, can do so.

The TUC’s response to skills development and the challenges of Brexit has been feeble, even by its own low standards. Last year it launched its Great Jobs Agenda. It’s a pious document that ducks the need for fresh thinking, and for leadership about independence and sovereignty from the trade union movement. Instead it offers a rehash of tired old ideas like the minimum wage (so why bother to join a trade union?), seats for workers on company boards, “learning accounts” and the customary pandering to identity politics.

The NHS has shown a lead, as reported in the last edition of Workers. Health Education England has accepted that

we cannot continue to depend on other countries for our supply of trained doctors, nurses and other health professionals. And the Department of Health is expanding the number of places available in existing medical schools and opening new ones. This approach is equally applicable to other sectors of the economy.

Will the small but significant impetus for the development of skills for Britain’s future after Brexit be maintained and grow? Or will it be lost in quangos, regionalism and localism, consultancies, vested interests and government inaction?

In recent decades we have seen any amount of vague rhetoric from governments. Remember Osborne’s March of the Makers? Probably not! But in the new independent situation, if the working-class plans and implements, then a real industrial future is possible.

The British working class’s unique contribution to world history so far has been to build the first industrial nation, and to build a trade union movement organised around skill, not religious or political affiliation as elsewhere in the world. New industrial skills in a new independent Britain would be an equal or even greater contribution.