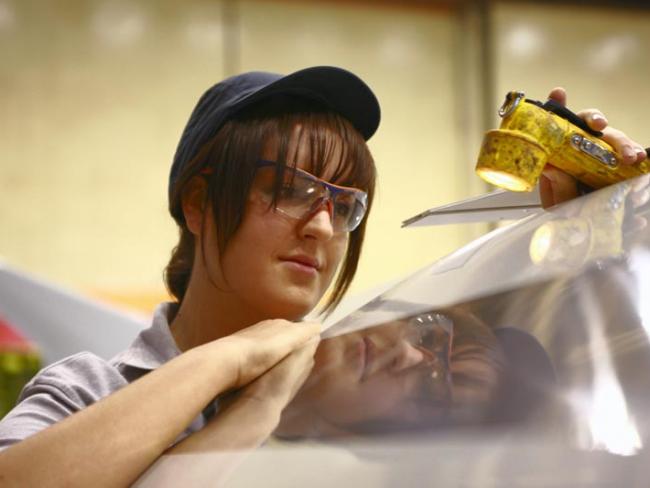 Apprentice Beth Pickering checking part of an Airbus wing. High-class apprenticeships such as hers are vanishingly rare. Photo Department for Business, Innovation and Skills (CC BY-SA 2.0).

Young workers need opportunities to develop through training and education and to have jobs to apply those skills. But there is a vast gap between what Britain needs and what is happening in our workplaces and colleges. Apprenticeship training illustrates this clearly. “Seizing the opportunity of Brexit” or “recovering from Covid-19” are empty rhetoric without radical change.

Governments are good at rhetoric, but hopeless when it comes to long-term planning and following through. Parliament does not hold government, or employers, to account on education and training any more than it does for other essential services.

Covid-19 is not the main culprit here. It has just made a dire situation even worse.

In January this year, before a single Covid-19 case had been identified in Britain, a former advisor to first Michael Gove then Nicky Morgan at the Department for Education detailed how £1.2 billion had been wasted on “fake apprenticeships”.

A report by think tank EDSK showed up the train wreck that is the government flagship training policy, the apprenticeship levy. The facts speak for themselves: in England, 564,800 learners started an apprenticeship in the 12 months before the levy began operating in 2017. A year later the figure slumped to 364,000.

And within these numbers lurk huge numbers of people who don’t fall into any category that most would recognise as apprentices. The most popular “apprenticeship” in the country, according to the report, is to become a “Team Leader/Supervisor”.

On its own this designation accounts for 1 in 10 of all apprenticeships, and has eaten up over £134 million of levy funding since 2017. Close behind come training for “Chartered Manager” and “Department Manager”, which have accounted for around £100 million each.

Chartered Manager courses, and similar, are doubtless high-quality training – though they are not for the 16- to 18-year-olds who most of us think of when we hear the word “apprentice”. But they are the simplest way for firms to spend the cash in their levy pots, normally in conjunction with a university.

And universities have been quick to cash in, setting up courses around the country on money provided by the skills funding agencies – up to £27,000 for each “apprentice”. According to the EDSK report, some £448 million of money for apprentices has been spent on inappropriately rebadged courses.

It goes further: 23 university-level institutions, including Oxford, Durham and Imperial College London, have relabelled some of their own academics as “apprentices”. This is “an overt attempt by these organisations …to use up the university’s own levy contributions”, says the report, adding, “The fact that you typically need a PhD to be accepted onto this levy-funded training course confirms that it bears no relation whatsoever to any genuine apprenticeship.”

What about the young people? The outlook on apprenticeships is, if anything, worse than it has ever been, even before coronavirus. The number of starts in England for the 6 months to January 2020 was 210, 000, down 11 per cent on the previous year. The number of starts for under 19s was under a third of the total, and down by 15 per cent.

The outlook is even grimmer. In a survey conducted by the TES at the end of June, almost 75 per cent of companies that took on apprentices in 2019 said they expected to cut back or axe apprenticeships leading up to September.

Traditionally employers provided apprenticeships as work-based learning for manufacturing and related industry. The number of apprentices declined as manufacturing jobs were decimated during the 1980s. Aerospace, nuclear, automotive and other high-tech industries maintained apprenticeship training,  but elsewhere poor employer engagement has become endemic.

Several different apprenticeship schemes have been set up by government since the 1980s. Each has avoided the links between apprenticeship and manufacturing.

A framework was developed with government contributing to training costs outside the workplace, up to 100 per cent for apprentices under age 25. The stated intention was to integrate apprenticeships with mainstream education, again without any real plan to back it up.

Worse, devolution to Wales and Scotland has created an uneven spread of initiatives and different rules, none of them coordinated across Britain.

And inevitably, the schemes have failed to either deliver the skills industry needed or create enough opportunities for youth.

This is not a new phenomenon. As the Nuffield Foundation noted in its 2015 report Does apprenticeship work for adults?, it goes back to the Labour government under Blair and Brown, which introduced the idea of “adult” (25+) apprenticeships.

The stated idea was to help older people in work, but the effect has been to sideline the young.

As early as 2008 the House of Commons Innovation, Universities, Science and Skills Committee noted: “We established during the course of the inquiry that the majority of apprentices were not new recruits to a business but existing employees who are in work and who ‘convert’ from their current jobs to apprenticeships with the same employer.”

‘The stated idea was to help older people into work, but the effect has been to sideline the young…’

The main source of training has been private sector providers, with a reduced role for further education colleges. It’s a model that has created an apprenticeship industry serving profit-seeking companies and greedy universities but has not delivered quality training. It has not served the young, and it has not served Britain.

On every measure apprenticeships are not providing the entry for young people to skilled manufacturing and allied jobs. Worse, the proportion of starts in manufacturing and construction is very low, and not much better in IT. Banking, accountancy and the public sector dominate.

What, then, can we make of the government’s July announcement of money and incentives for firms taking on apprentices and young people between 16 and 24? If history is anything to go by, the lion’s share of the cash will be garnered by companies more concerned with gaming the system than providing proper apprenticeships.

The unmistakable conclusion is that we need regime change. Britain cannot afford to leave the education and training of its young people – the future of its industries – in the hands of rapacious employers, money-obsessed higher education institutes and governments more concerned with headlines than realities.

Instead, workers must place themselves – force themselves – into the heart of the process. They must use their unions to take control of the format and content of courses, ensuring high-quality training and job protection for young people.

Rebuilding requires builders
C19th London: skill and class
Skills and education for the future of Britain
Apprenticeship levy – we need a better way
Hope for skills at Bombardier trains