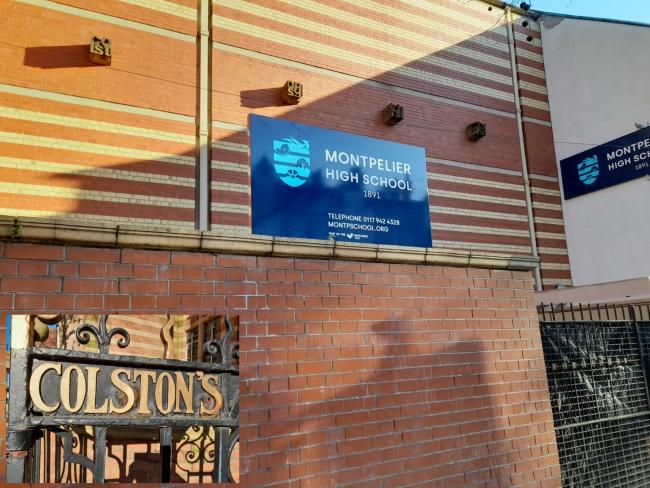 Montpelier High School used to be known as Colston’s Girls’ School. Staff and students voted on the name change. The old name survives, as a reminder, in the school gates (inset). Photo Workers.

The statue of the slave trader Edward Colston, in the centre of Bristol, aroused much debate and concern over decades, even before it was thrown into the docks in June last year.

The failure of Bristol City Council to amend the plaque, which contained only fulsome praise for Colston as a “philanthropist”, a strange perversion of meaning for a word that means “lover of humanity”, had caused a great deal of frustration. The plaque made no reference to how he made his money, and called Colston “virtuous” and “wise”.

Back in 2018 the Merchant Venturers, which distributed much of the £70,000 that Colston left to Bristol in his will, refused to accept the rewording. Last year, though, it accepted that its approach was “inappropriate” and welcomed “the fact that the statue is gone”. But the council was weak in not insisting it should be changed.

The decision to find the Colston 4 not guilty should not be misused: there should be no further restrictions on our right to protest, particularly as outlined in the government’s proposals for a new law on police and crime. Nor misrepresentations of the way to combat racism – which have to be about real improvements, not symbolism.

The Colston Hall, owned by the council, is now called the Beacon. Colston’s Girls’ School, which benefitted from Colston's money, after consultation, now calls itself Montpelier High School, after the area in which it is situated.

The name was determined by a ballot of staff and students. Colston’s School, originally for boys only, is also in the process of changing its name. And some residents have collectively decided to change the names of the streets they live in. The primary school named after Colston changed its name in 2018.

The important thing is that these changes have been and are being decided in Bristol, by Bristolians.

It is also important that an accurate and objective account of why these changes have taken place is provided to current and future generations of schoolchildren. This history cannot be hidden.

Capitalism uses racism to divide the working class.  We must make sure that our opposition to racism is not also used to divide us.