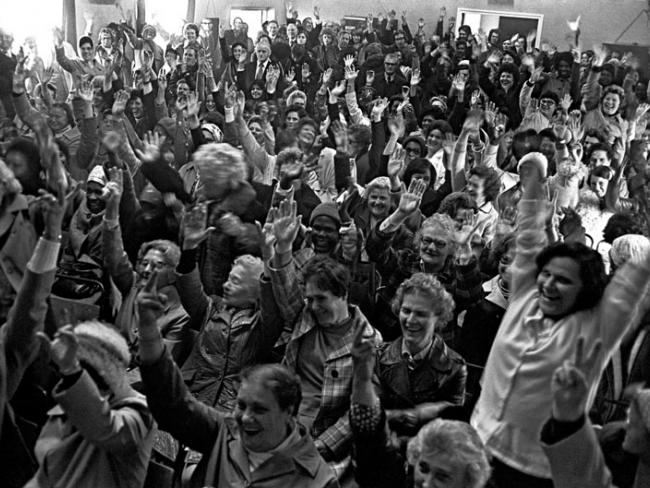 Equal pay strike at Trico, West London. The 350 women, members of the AUEW, vote to return to work after 3 months on strike and with nearly all of their demands conceded by management. The women walked out when management refused to make up the £6 pay differential between men and women doing the same job. Photo Peter Arkell/reportdigital.co.uk.

Women workers had been struggling for equal pay for over a century before the Equal Pay Act was passed in 1970. And Parliament gave employers another five years grace to find ways around it. Workers at Trico showed that their own action was the surest way to secure their aims.

Their struggle is documented in a fine book by Sally Groves and Vernon Merritt. Groves worked at Trico and was publicity officer on the AUEW strike committee. Merritt was a strong supporter of the strike and an AUEW member. A key theme in the book is how people thought the Act would “finally secure equal pay as a right” and what the Trico workers did when that turned out not to be so.

Trico had paid little regard to the Act. Discriminatory rates had existed for over ten years and the company had done little to end them. In September 1975 the Amalgamated Union of Engineering Workers [AUEW] representing the Trico workers started negotiations aiming for a common pay rate regardless of sex by the time the Act became law.

Nothing came of negotiations. The company turned the women down flat, so they went on strike on 24 May 1976. The AUEW Executive Council declared the strike official shortly afterwards on the recommendations of local officials, backed by Reg Birch, the Executive Councillor for the South East. He was also a founding member and Chairman of the CPBML.

The strikers, backed by Birch, decided to boycott the Industrial Tribunal, for very good reasons. The tribunal had turned down over 70 per cent of the equal pay applications in the first six months of its existence.

This was the first time that a trade union had ever boycotted a Tribunal. The union was concerned that the blatant pro-employer bias damaged the spirit and intent of the Act. As predicted the Tribunal ruled against the women.

The AUEW and the Strike Committee issued a joint statement to the press: “This dispute is a milestone in the fight for equal pay for women and has been instrumental in highlighting the inadequacies and legal loopholes in the Equal Pay Act.”

The continuation of official union support for the strike was crucial, but it was never a foregone conclusion. Without this, “the women and their male supporters would not only have been demoralised and delegitimised in the eyes of the trade union movement: they would also have been starved back to work.”

The situation with the union’s Executive Council was nursed and managed constantly by Roger Butler, the union’s local official, and Reg Birch, the strikers’ representative on the executive. It did not come out until much later how important that was for the successful outcome.

John Slidders, the Trico personnel executive, admitted after the strike that the union had played a huge role, with the officials doing what the members asked them to do. He said the union was “too democratic”.

On 29 September, “Reg Birch informed the company side that no deal would be acceptable to the Executive Council that was not acceptable to Bill MacLaughlin, AUEW Divisional Organiser, and Roger Butler…This was a warning to the company that they should not try and make a deal with the AUEW National Executive behind the backs of the women and their local officials.”

That strengthened the strikers’ position and ensured that the company had no alternative but to deal with MacLaughlin and Butler from then on. On 14 October  the company caved in. The women’s demands were agreed in full – a common operational rate regardless of sex. Exactly what the union had been demanding in negotiations for months before the dispute.

After 21 weeks of determined struggle, the women had won. That was despite strike breaking workers bussed in with the support of the police, and the industrial tribunal decision against them.

It turned out to be the longest successful strike for equal pay in British trade union history. And it was the first time a trade union had ever negotiated a settlement despite a Tribunal decision against it.

Butler said, “This is a lesson to the movement on how equal pay can be achieved. It won’t be brought about by tribunals. It’s only through trade union unity and working-class struggle that justice for women workers will be won.”

Groves and Merritt point out that it was crucial that local union officials gave unwavering support and that the strikers “…were able to keep all the negotiations in their own hands. What’s more, the Strike Committee and their officials understood the dangers inherent in relying on a law rigged in favour of the employers.”

By contrast, in the dispute at Grunwick later that summer, the workers lost because the local officials did not give unwavering support to the striking women and did not keep all the negotiations in their own hands.

Groves and Merritt observe that at Trico “…lack of support from the Labour and TUC leadership meant that all the negotiations with company were kept firmly under the control of the local AUEW officials, as well as…Reg Birch…who ensured that the EEF [Engineering Employers Federation] did not ultimately take over and negotiate directly with the AUEW Executive Council, which would have taken the final settlement out of the hands of the strikers’ representatives.”

Birch paid tribute to the strikers’ victory as “one of the best struggles that workers have ever joined together in, the Trico women's battle for equal pay. Black and white together, only wanting to know: are you with us or against us? Straight, simple, classic thinking, indomitable, unbeatable."