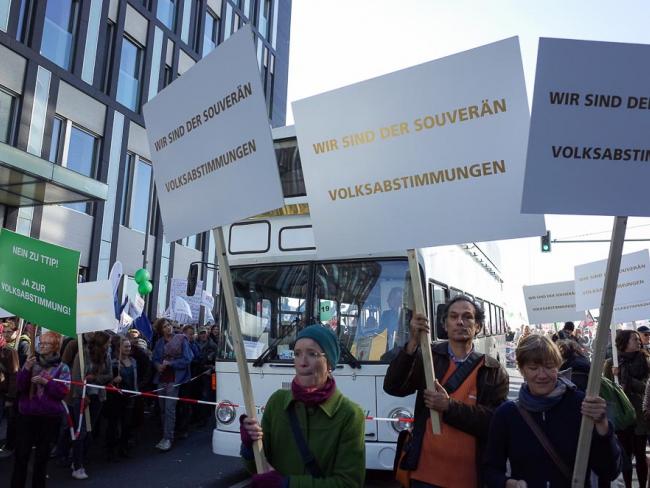 250,000 marched in the giant demonstration in Berlin against TTIP on 10 October. Placards shown say "No to TTIP" and "We are sovereign", and call for a referendum on the treaty. Photo Lucas Rosenthal (CC BY SA 2.0)

No indeed. She takes it from the transnational corporations which stand to benefit.

Declared opponents are not the only ones outraged by the negotiation process. Interviewed in September by French regional newspaper Sud Ouest, France’s minister for foreign trade, Matthias Fekl said that the “total lack of transparency” posed “a democratic problem”.

“Europe has offered many compromises, and has received no serious offers from the Americans in return.”

Meanwhile, reports from Washington suggest that the European Union is already dropping its standards ahead of a TTIP agreement. The newsletter Washington Trade Daily said that EU trade counsellor Damien Levie told a free-market US think tank that genetically modified crops and chemically washed beef carcasses were already being allowed into the EU. The news will do nothing to dispel anxiety throughout Europe that TTIP will involve a collapse of environmental standards in a capitulation to large-scale US agriculture companies.