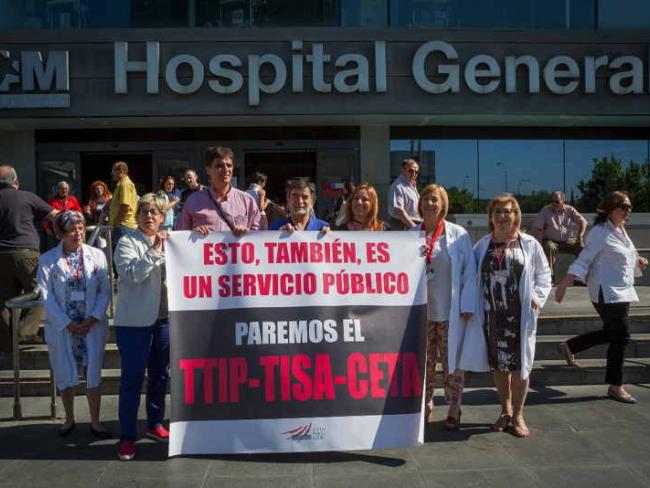 Spanish union members demonstrate against TTIP outside Madrid General Hospital, 28 May. The banner reads: “This, too, is a public service. Fight TTIP-TISA-CETA." Photo courtesy EPSU.

Pressure from the peoples of Europe over the EU’s embattled TTIP (Transatlantic Trade and Investment Partnership) negotiations is having an effect. With the European Parliament scheduled to meet for an important vote on TTIP on 10 June, MEPs are showing signs of panic and switching positions from day to day.

In the latest twist, the social-democratic group in the parliament on Wednesday 3 June reversed its fudged support for the notorious Investor State Dispute Settlement (ISDS) mechanism. The group, which includes Britain’s Labour MEPs, overturned its position of only a week earlier at the International Trade Committee.

‘Faced with a storm of outrage, the social democrats are trying to retreat.’

The group’s original support was a typical act of hypocrisy. The International Trade Committee, with the support of the social democrats, had signed up to reform of ISDS, but studiously avoided specifying the reform. This would have allowed a treaty to be approved including ISDS – while still allowing social democrats to say publicly that they didn’t like it.

Faced with a storm of outrage, the social democrats are trying to retreat, now saying they want ISDS explicitly excluded from TTIP. A wise response from workers would be to keep up the pressure to ensure that they don’t change their minds again.

• In a related development, also on 3 June, the Wikileaks website released 17 secret documents on the even more secretive talks on the Trade In Services Agreement, TISA. TISA is another trade agreement that the EU is negotiating with 23 countries, including the US.

TISA aims to do for trade in services – such as banking, insurance, data handling, telecoms and the “free movement” of professionals – what TTIP is trying to do for trade in goods and investment. Like TTIP, TISA is looking to ensure that once services are privatised they can never be taken back into public ownership.

Among other things, the documents reveal an intention to allow personal data on citizens of EU member states to be sent anywhere in the world, and moves to limit any requirements to use open-source software.